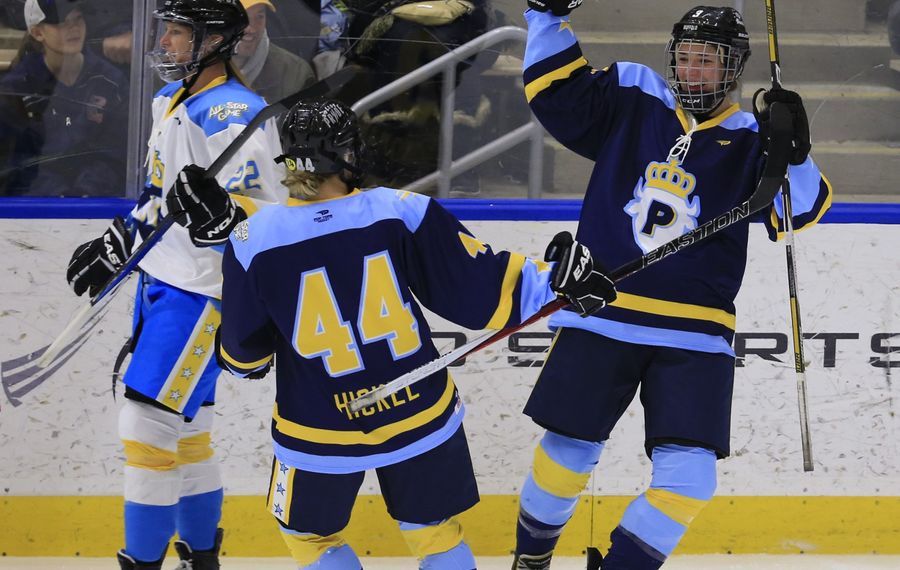 It was late in the first period when Emily Field picked up a rebound in front of the net and fired it home.

She waited for her teammates to join her in the corner, threw her glove in the air, and as it hit the ice so did the players in an orchestrated goal celebration.

It was the theme of the afternoon – a bit of frivolity and a bit of rivalry – as the National Women’s Hockey League held its first All-Star Game at HarborCenter on Sunday.

“I think going into it we didn’t know what to expect as far as how hard we wanted to play,” said Kelley Steadman, who had two goals for Team Pfalzer to earn MVP honors. “I think we kind of settled into a groove. We talked about it before the game that we wanted to go out and give everyone a good show but also wanting to play hard and wanting to win.”

“We all like to have a good time but I think some of us don’t know how to turn the competitiveness off,” Pfalzer said. “We wanted to give the crowd a good game and show the skill of every player.”

While they did not release an attendance figure, there were about 1,000 fans in HarborCenter for the event, a showcase for the NWHL, which in its inaugural season has already made an impression in the hockey world. The buzz already generated a significant number of questions about expansion and potential mergers to league Commissioner Dani Rylan during weekend media sessions.

“Our business model is built on being regionalized,” Rylan said when asked about tapping into the women’s hockey markets in Minnesota and Wisconsin. “It’s a busing league and it keeps our costs down and keeps us sustainable. Before we make a big jump to a plane we have to make sure it makes sense on the business side.

“The focus has always been on making Year One as successful as possible, then thinking about expansion. … We don’t want to expand too fast, but as the game grows and it’s going to have to expand at some point, just the talent on the ice, there has to be somewhere for these players to play.”

Hand-in-hand with expansion talk is the question about a potential merger with the Canadian Women’s Hockey League. The CWHL, which has one U.S.-based team in Boston, operates under a different business model than the NWHL, with the biggest difference being payment of players. The CWHL does not pay players. The NWHL does.

Still, the two leagues have played off each other to grow the game this season, including meeting for the first women’s outdoor game as part of the NHL’s signature Winter Classic, and talks continue between the two leagues on how to find common ground.

“It’s a growing relationship. We look to continue to co-exist with them,” Rylan said. “I think there are a few obstacles. On surface level it might seem like, ‘Oh why don’t you guys just merge. It’s very easy. Just become one league.’ But there are a few more complications than that to make it a reality. We look to continue to co-exist and hope to have opportunities to play them again in the future.”

But expansion and merging are all topics that feel a bit ahead of the game for Rylan and the NWHL, who have a number of successes to celebrate already from the inaugural season.

Rylan said the league has hit most of its financial goals and surprisingly crushed its merchandise sales – so much so that jerseys were back-ordered for a time.

Most important from the business side were a television deal with NESN, a live streaming arrangement with ESPN3 and the league’s first corporate sponsor in Dunkin’ Donuts.

“There’s a focus on bringing in more sponsors as we roll into Year Two and Year Three,” Rylan said. “And what’s awesome is we have a tangible product now. We have numbers to present to these sponsors. We know what our fan base looks like and we know how passionate they are.

“It’s definitely something sponsors see a value in and outside our fans they also see value in our players. Outside of the league as a whole we have 88 brand ambassadors in our players who are ready to support anyone who supports them.”

Amy Moritz– Amy Moritz, a native of Lockport, has covered colleges, baseball and hockey for The Buffalo News since 1999. An endurance athlete, she has completed an Ironman along with numerous marathons and half-marathons.