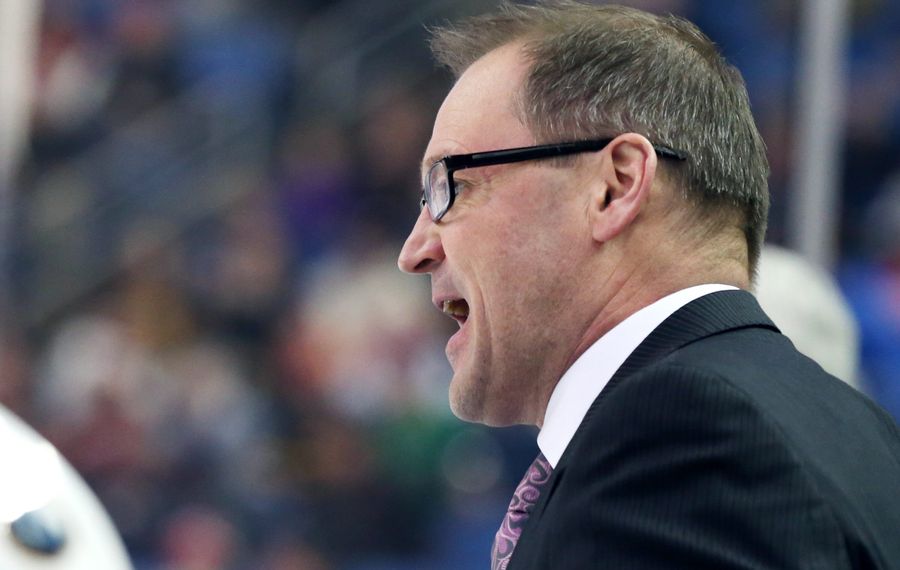 Dan Bylsma knew what he signed up for when he came to Buffalo. But don’t think for a minute he’s going to get used to losing.

This is a man who won a Stanley Cup just four months after he became a head coach with the Pittsburgh Penguins. The fastest coach to 200 and 250 wins in NHL history. Owner of four 100-point seasons and a lockout-shortened campaign that projected to 123 points over a full schedule.

But now instead of heading a team full of stars, Bylsma inherited a project. It’s a heavy lift, not altogether unexpected. But losing is difficult if you’ve never dealt with it.

The Sabres are 29th in the NHL’s overall standing with two games left prior to the All-Star break, both on the road. They have 25 regulation losses – already more than Bylsma has had in all but one of his previous six seasons. They are the worst team in the league at home.

So how does a former Cup winner, Coach of the Year and Olympic bench boss deal with losing?

“You should ask my wife that question maybe more than me, where I’m at with it personally,” Bylsma joked Friday in First Niagara Center.

“It’s difficult, there’s no question. We want to win every game going in. I know we’re in a development process with our team, how we play, how we want to play. The level which we want to play and compete is something we’re developing. I think it’s put us into being a competitive team, a team that should and does compete to win every night. It’s difficult when you don’t.”

The Sabres were off Saturday and will return to practice Sunday in HarborCenter. Weather permitting, they are scheduled to leave for New York on an afternoon flight and take their 19-25-4 record into Monday’s game against the Rangers at Madison Square Garden.

While few people expected the Sabres to be in the playoff hunt after back-to-back last-place finishes in the NHL’s overall standing, improvement was certainly expected. And there are clear signs of progress.

Fourteen of the team’s losses have been by one goal. What was the worst team in the history of hockey’s analytics era has dramatically increased its possession numbers, with a hideous Corsi rating of roughly 38 percent last year moving to nearly 49 percent this year (The Corsi numbers reflect all shots taken during a game). The team’s 10 road wins are already more than either of the last two seasons.

There have been major steps taken by young players such as Rasmus Ristolainen and Sam Reinhart, and No. 2 overall pick Jack Eichel remains third in rookie goal scoring, even though he has tallied in just three of his last 21 games.

With some signs trending upward, a catchphrase has developed among fans on social media that the standings don’t matter. The Sabres’ coach, for one, doesn’t agree.

“They matter, for sure. That’s why we’re playing the game,” Bylsma said. “We’ve looked at the rest of the season, where we can be, where we need to get to. That’s something we’re focused on with every game. We’re playing our game in small chunks right now and trying to win those small chunks. ... That’s where our focus is as a group and as a team. Doing that, the score and the standings will take care of themselves if we do.”

In one example, Bylsma issued a best two-of-three challenge to his team on a recent Midwest road trip to Chicago, Winnipeg and Minnesota. After the 3-1 loss to the Blackhawks, a game that was tied inside the final six minutes, the Sabres were down, 1-0. But they rallied to take the final two games and complete the challenge.

They were unsuccessful in their last two games, suffering a last-minute loss Wednesday at Colorado and Friday’s 3-0 defeat to Detroit. The Red Wings scored all their goals in the last eight minutes in a game that saw Buffalo give up the final 18 shots on goal. The Sabres’ entire corps of forwards did not have a single one over the final 21:59 of play.

That loss dropped the Sabres to 1-6-1 in their last eight games at home. They are just 9-15-2 downtown this season and remain last in the league with 1.9 goals per game on home ice.

There was plenty of frustration involved in the latest loss. For the second game in a row, the Sabres killed off a four-minute high-sticking penalty in the third period and then gave up a 5-on-5 goal within the next 45 seconds.

It happened when they were holding a 1-0 lead in Colorado and again Friday in a scoreless game, when Detroit rookie Dylan Larkin finally scored the game’s first goal with 7:59 to play.

“I thought we were going to kill that off, ride that momentum and come back and score one the other way,” Bylsma said. “Literally before you could get the next shift over with, that’s when they pop the game-winning goal.”

After a dismantling of league-leading Washington and Monday’s win in Arizona, punctuated by the togetherness of a brief brawl after the final buzzer, the Sabres have slid back again. The fact that it’s part of the process doesn’t make it any easier for Bylsma to accept.