New York State plans to shut off the thundering waters of Niagara Falls – again. At least, the American side of the falls. This “once in a lifetime” event actually may take place twice in some folks’ lifetimes. The New York State parks system wants to turn off the falls on the American side sometime in the next two to three years to replace two 115-year-old stone arch bridges that allow pedestrians, park vehicles and utilities access to Goat Island.

The proposal to “dewater” the falls will be presented at a public hearing Wednesday at the Niagara Falls Conference Center. Two of three plans propose a temporary shutdown of the American Falls.

The American Falls was slowed to a trickle in 1969 to study the effects of erosion and buildup of rock at the base of the falls. When that happened, people came from all over the world to see the falls turned off, said Michelle Kratts, who served as Niagara Falls city historian until this past December.

“It’s the nature of curiosity. You want to see what’s underneath, to see its skeleton,” Kratts said.

In fact, something like skeletons were found. Workers on that project discovered two bodies when the water was diverted, she said.

They also found millions of coins, carrying them out in buckets to deter people from going out onto the rocks, she said.

Robert Borgatti was 13 years old and living in Niagara Falls when the American Falls was turned off. He said he rode his bike out to the brink of Niagara Falls several times to get a closer look.

“I remember being a little disappointed because the scene was just a desolate landscape of rock, debris, tree limbs and construction equipment,” Borgatti said.

But he said what he found most amazing was that it could be done.

“I learned a new word that summer – cofferdam,” Borgatti said.

Joel Paradise, 57, was 11 at the time and said his father took him and his brother to the tip of Goat Island to watch crews build the cofferdam – a buildup of dirt and rock that diverted the swift moving waters of the upper Niagara River from the American Falls to the Horseshoe Falls in Canada.

“It was a pretty big event,” Paradise said. “Dump trucks started from the shore and progressively kept moving back with rock and fill into the river.”

The U.S. Army Corps of Engineers diverted water away from the American Falls in 1969 to study erosion. But nothing was changed, after the International Joint Commission recommended that nature should take its course.

This time, safety and aesthetics are the reasons for dewatering the falls. 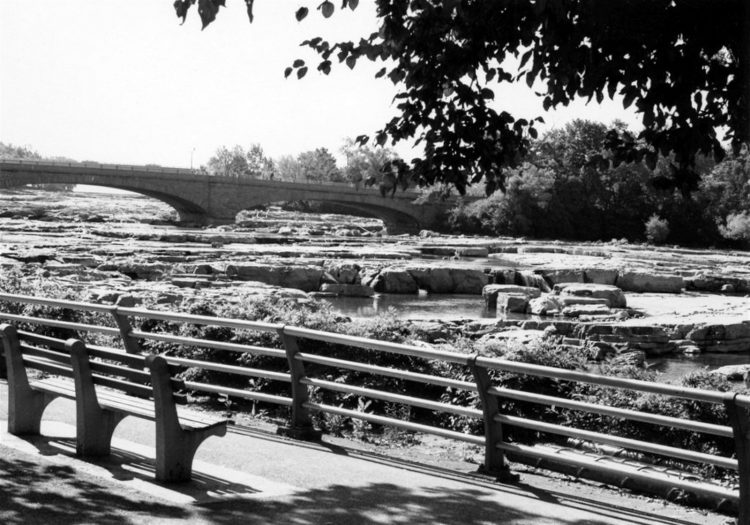 The concrete arch bridges were closed in 2004 and temporary truss bridges were put in to provide for safe passage. Underneath, the concrete bridges remain, but the structure has continued to deteriorate.

The temporary bridges are an “aesthetically unappealing experience for park visitors,” according to the bridge design report. The bridges also restrict views of the rapids and are narrower than the concrete arch bridges.

The proposal is to replace the two stone arch bridges – one from the mainland to Green Island and the other from Green Island to Goat Island. Both bridges are wholly in Niagara Falls State Park in the U.S.

Once repair work begins, traffic and pedestrians would be diverted to the American Rapids Bridge, which is just outside the park and is accessed from First Street in the city.

An alternative to rehabilitating the arch bridges was described as not viable, given the extensive deterioration of the arches and the type of material used on the bridges.

Tom Yots, the Niagara Falls historian from 2002 to 2010, was present the day in 2004 when the base of the stone bridge collapsed. State officials have been talking about a replacement ever since, he said.

“The biggest problem is coming up with the money to do this,” Yots said. “These beautiful bridge designs go back to the beginning of the 20th century. Olmsted designed what construction was to look like in that park so they don’t look out of place. The (temporary) bridge is everything Olmsted would have abhorred.”

Costs to return these stone arch bridges to working condition in the park are estimated at between $21.6 million to $37.3 million, depending on the repair option. Money will be secured after a plan is chosen and State Parks will be able to evaluate opportunities for state and federal funding for the bridge replacement project.

How to turn off the water

One of the plans proposes diverting water from the American Falls for five months in the first year, from August to December.

A second option would divert water for nine months, from April through December, affecting the entire summer tourism season.

A third plan would not divert water from the falls but it has been effectively eliminated from consideration because it is too costly and would take three years to complete.

After the bridge work is completed, the cofferdam would be removed. The cofferdam is not anticipated to result in any long-term effects to the riverbed or the falls, according to the design report.

Construction traffic is expected to increase during this period and there is the potential that a “dry falls” could lose its luster and result in less tourism, the state parks report noted.

The dewatering is expected to have a limited effect on natural resources, temporarily dislocating some birds. Only a small portion of shoreline will be affected. In addition, soil and fill removed from the project will be chemically analyzed before disposal.

The state Office of Parks, Recreation and Historic Preservation estimated it will have a design approval in place by this summer, after all public comments and reviews have been completed. A final design for the project will begin when funding is in place. Approximately two years will be needed to complete the final design, obtain permits and approvals, and bid and award the construction contract. Actual construction is also anticipated to last approximately 24 months.

Opposition to the plan

Paul Gromosiak, a Niagara Falls historian and author, is an opponent of the plan and said he voiced his opinion last year when it was first proposed.

“The sun baking down on the rock isn’t good for the falls and it also affects the appearance of the falls. I’m very concerned about the long-term effects,” Gromosiak said. “I wish they could do it without turning off the falls.”

He said he is in favor of replacing the bridges, but does not want to see planners do anything that would harm the natural evolution of the falls.

Gromosiak said he was 47 in 1969 and was there almost every day watching crews work and talking to people.

“I just wanted to see the progress, and I wanted to see how tourists were reacting. Of course they were confused,” he said. “I talked to a number of tourists – some were angry, some were indifferent and others though it was a great idea.”

“I think it’s a mistake,” Gromosiak said of the plan to dewater the falls.