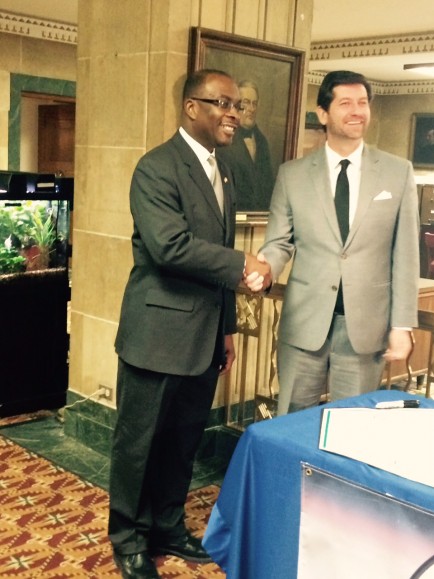 After County Executive Poloncarz joined Mayor Brown in signing the mayor's Opportunity Pledge Thursday, the two men shook hands. One of the television cameramen asked Brown and Poloncarz to redo the handshake so he could get it on camera. So the two leaders clenched  hands again, waiting for the cameraman to take the picture. But he was still setting up.

"I like the guy, but we don't want to hold hands," Brown quipped, letting go of Poloncarz's hand until the cameraman was ready.

Erie Basin marina slip holders  - many suburban residents -  seem to be semi-annual visitors to the Common Council, sometimes offering praise, other times criticism of the marina operation.  Last time the group came  they complained that the new slip fee schedule was based on boat size, rather than slip size. The Council seemed to consider it a reasonable complaint, so the city is proposing a new schedule - based on slip size - that city officials say will reduce slip fees somewhat.

Proposed fees for 30 and 38-foot slips are higher.  And if a boat is longer than the slip, the city is suggesting an additional per foot charge be added. The fees still need Council approval.

Developer joins Planning Board
Mayor Byron Brown's  newest appointment to the city's Planning Board is Andrew Malcolm, a mechanical engineer employed as a project manager at LP Ciminelli. Malcolm's resume says he's been with LP Ciminelli since 2005. He a UB grad, and member of the Buffalo Urban League Young Professional organization as well as the National Society of Black Engineers.

In today's Buffalo News and on buffalonews.com, I have story on new Bailey Ave. bridges and also one on smoking ban proposed at BMHA