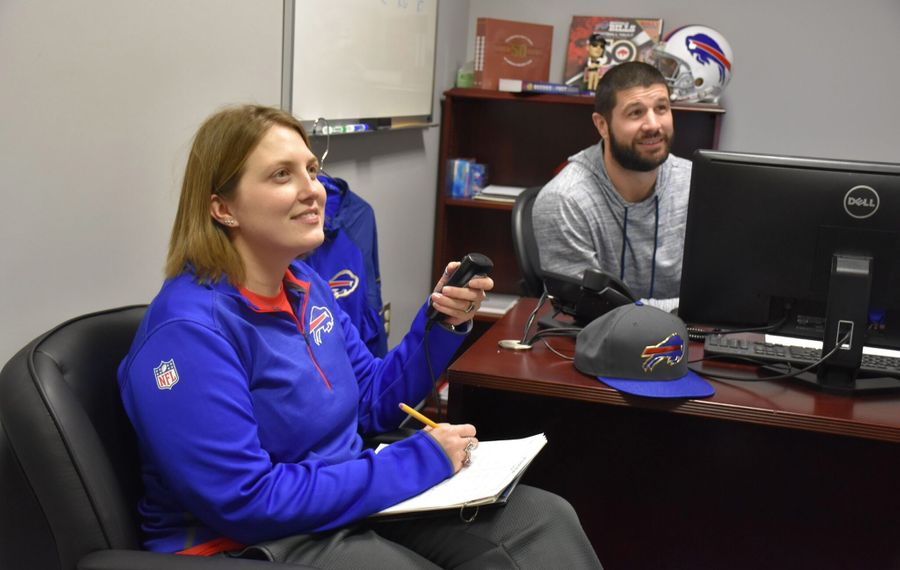 Now that Kathryn Smith has made history as the first female, full-time assistant coach in the NFL, it’s a good time to explain what her role will be with the Buffalo Bills.

“Kathryn has been working in a football administrative role and assisted the assistant coaches for years,” Ryan said in a news release issued Wednesday night announcing her promotion. “She has proven that she’s ready for the next step, so I’m excited and proud for her with this opportunity. She will work with Danny Crossman and Eric Smith involving a number of responsibilities.”

Smith replaces Michael Hamlin on the Bills’ coaching staff. Buffalo’s special teams ranked 16th in the annual Dallas Morning News rankings – which are accepted as the league standard. The Bills did some things very well on special teams – including leading the league in fewest yards per kickoff return (17.9) and opponent’s average drive start (19.9-yard line). Buffalo also had four takeaways on special teams, tied with Tennessee for the most in the league.

But kicker Dan Carpenter missed six extra points and the team was never able to settle on a return man, leading to disappointing results returning both kicks and punts.

In an interview posted Thursday evening on the team’s official website, Ryan spoke a bit more specifically about what Smith’s role will be.

“A lot of that goes with the tough things. Doing all the computer stuff, doing all the drawings, all that type of stuff,” Ryan said. “Working mainly with scout teams. … She’s done things like this in the past.

“With the knowledge and commitment she has – very committed young lady – I think she’ll do a great job.”

Here are five things to know about the position of quality control coach in the NFL.

1. The roots of the job trace back to Tom Landry. The legendary Dallas Cowboys’ coach was one of the first to use statistical analysis. According to a 2009 article in the New York Times, the first-ever quality-control position on an NFL coaching staff was created by Mike Holmgren with the San Francisco 49ers in 1990. Holmgren wanted to transfer the 49ers’ offensive playbook – which was a series of sketches stapled together – onto a computer. The coach he hired to do that was Jon Gruden, who went on to win a Super Bowl as head coach of the Tampa Bay Buccaneers.

2. It’s an entry-level position, but coaches who have done it swear by the experience. Think of a graduate assistant on a college coaching staff. That’s a good comparison to a quality-control job in the NFL. Gruden, for example, made $500 a week and slept most nights in his office. He got coffee and ran for anything the coaching staff might need during practice. Work days can easily be 18 hours long.

“We worked quadruple everybody else, but we got to feel like a coach,” current Pittsburgh Steelers offensive coordinator Todd Haley told the Times in that 2009 article. Haley got his start with the New York Jets in quality control. “We had responsibility. It’s the greatest job in football as far as learning.”

As such, a grinder’s mentality is needed. Ryan referred to Smith’s “strong commitment” in announcing her promotion, so in that regard, she’s well qualified. She is entering her 14th season in the NFL, the last two of which have been spent as the assistant to the head coach, with the Bills last year and Ryan’s final year with the New York Jets. Prior to that, Smith was a player personnel assistant from 2007-13 with New York, in addition to a college scouting intern (2005-06) and Jets game-day/special events intern (2003-04).

Looking around the league, three of the most recent head coaches hired this offseason – Miami’s Adam Gase, Philadelphia’s Doug Pederson and the New York Giants’ Ben McAdoo – have experience as a quality-control coach on their résumé.

3. Game preparation is at the heart of the job. Watching film of Buffalo’s upcoming opponents and preparing scouting reports for Crossman is likely to be the No. 1 priority for Smith. That means working at least one or two weeks ahead in the regular season.

In an interview with the Bills’ website, Smith said she is spending most of her time now breaking down video of the special teams of Buffalo’s 2016 opponents.

“I think starting in scouting and personnel really gives me a good foundation for understanding the game, the players, the positions,” she told the website. “So I think that will just help provide me with a good base for now learning more of the specifics of what we do on special teams with respect to scheme.”

A quality-control coach will break down what formations and personnel groupings an opponent uses. Specifics like down and distance and field position are charted. Even details like the direction and hang time of punts, for example, would likely be noted by Smith. That report would then be given to Crossman when the Bills begin their game-planning.

“What you do is chart the tendency of that coach, so that you can tell your team that ‘in this situation it’ll always be a run or always be a pass,’ ” current Chicago Bears coach John Fox said in a 2004 interview with “60 Minutes,” describing the role of quality control for his team. “So your team knows what to expect.”

In Smith’s case, it will be less about whether teams run or pass, obviously, and more about the formations and personnel used specifically on special teams.

In particular, she’ll be looking for tendencies. Do the Patriots call a rush of the punter every time their opponent is punting from mid-field? If so, Crossman needs to be aware of that.

Do the Bills kick off to the right side of the field more often, and if so, how does the opponent handle kickoffs to that side? Smith will also likely be on the lookout for tendencies displayed by the Bills, so as to not expose potential weaknesses.

The video breakdowns may not be limited to the opponent, either. In other organizations, quality-control coaches are responsible for cataloging practice film, and running the film during team meetings.

With the Denver Broncos, for example, offensive assistant Brian Callahan told the team’s website in a 2012 interview that some of his responsibilities included getting the day’s installation package set up and distributed to players.

Producing depth charts and getting them to the coaches is another responsibility that could fall to Smith.

4. Technology is an important, and evolving, part of the job. Smith will have access to every NFL game, meaning she’ll be able to watch every special-teams play. Part of her job, then, may be to look for oddities around the league. Did the Dolphins run a fake field goal that has not been seen before? That type of information could be valuable to the Bills, either as the springboard for their own use, or as something to defend against in future games.

Being able to clearly label and organize data, and enter it into a computer, is a critical part of a quality control coach’s job. As the use of analytics and advanced statistics has risen in the NFL, that’s more important than ever.

“There’s more information available with the new video systems and computers,” Cincinnati Bengals linebackers coach Matt Burke told the Cincinnati Enquirer last June in an article on the importance of quality-control jobs. “There’s so much more you can do so you have to be able to take advantage of that and all that information and data.”

Accuracy and attention to detail is also a big part of the job.

5. Quality-control coaches sometimes run the “scout team” in practice. According to the Bills’ website, that is something Smith will be “heavily involved in” during the 2016 season.

Because they know the tendencies of their opponents, quality-control coaches are often in charge of making sure the team’s starters are given as accurate a look as possible at what they’ll face in the upcoming game.

As for game days, one of Smith’s roles could be charting the Bills’ “operation time.” An example of that could be how long it takes punter Colton Schmidt to get off a punt.

Do the Jets have someone who is consistently making big plays on special teams? That’s the type of information Smith will likely document. Is that player in his usual spot, or has he lined up elsewhere? That’s something else Smith might monitor on game day.

So, there will be no shortage of responsibilities for Smith in her new role. It’s a job that she admitted being surprised about when Ryan first approached her.

“But I also know Rex really puts a lot of faith in his staff and his people, so from that standpoint it made sense knowing I’ve worked with Rex directly and indirectly for a number of years,” Smith told the Bills’ official website. “So he knows my work ethic and what I’ve done in the past, but it was a bit surprising that he came to me with this.”

Ryan consulted with Arizona Cardinals coach Bruce Arians before announcing the hiring. Arians hired Jen Welter as a coaching intern for training camp prior to the 2015 season, working with the team’s linebackers.

“It takes one or two practices, and then the players treat them as a coach, and it was fantastic,” the Bills’ coach told the team’s website Thursday.