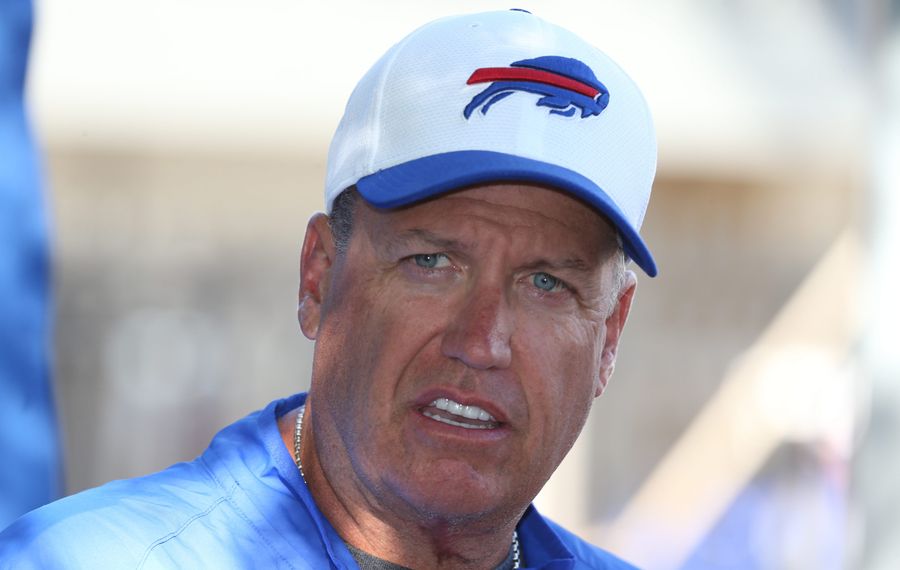 When the head coach of the Buffalo Bills shows up unexpectedly in federal court, all kinds of rumors can sprout.

Throw in brother Rob, now an assistant with the Bills, and the Robert H. Jackson Courthouse was abuzz Thursday morning with reports of the Ryan brothers in the house.

There was Rex, wearing a Clemson football hat, and Rob, adorned in all types of Bills’ regalia, waiting in line with dozens of immigrants heading for a naturalization ceremony.

And then, as the brothers made their way through the court’s first floor security system, the buzz escalated.

“Is that Rex Ryan?” one of the soon-to-be new citizens was heard to say.

Turns out the Ryans were there for the same reason, the naturalization of one of the 60 immigrants taking the oath of citizenship on Thursday. She’s believed to be a family friend from Russia.

Both Ryans declined to comment after the ceremony. But they smiled as the woman walked to the front of the courtroom, accepted her certificate of citizenship and shook hands with U.S. Magistrate Judge Hugh B. Scott.

The Ryans posed for photographs with other new citizens and their families, but quickly left the courthouse afterward.

“With the glasses and hat, you couldn’t tell who it was right away," said one courthouse employee who spotted Rex Ryan as he stood in line.

He acknowledged that Rob Ryan, wearing a Bills’ jacket and his trademark long hair, probably caught most people’s attention first.

The two coaches sat throughout an hourlong ceremony that included a mention of each new citizen and the country each came from, 26 in all.

They also listened as Scott, the great-grandson of a slave from Alabama, welcomed them to the “greatest country” in the world and encouraged them to share in its understanding and tolerance of others.

“One of the greatest assets of our country is its rich diversity," the judge told them.

By all accounts, the Ryans’ appearance at the ceremony was unexpected, and a court employee confirmed that new citizens are not required to identify their guests in advance.

On a day when the only other major courthouse event was a trial involving gang members accused of murder, the Ryans’ visit was seen as a welcome distraction from normal courthouse life.

“It made for a fun day," said one courthouse employee.