Kelly and Kevin Krupski began to forge their notion of the New York Beer Project on Independence Day 20 years ago, as they sipped brews and drank in the atmosphere at Brewery Ommegang in Cooperstown.

From there, the Town of Lockport couple embarked on a research and development pilgrimage to dozens of the top craft breweries in North America, including Rhinegeist in Cincinnati, Victory outside Philadelphia and Brooklyn Brewery in New York City.

What made them so alluring?

Solid restaurant, regular events and specials, and an understanding of the needs and desires of their communities, the Krupskis learned. And great beer.

“Kevin and I knew the place had to be spectacular, the food had to be wonderful, the beer had to be the best,” Kelly Krupski said. “That was important to us. Mediocrity isn’t accepted in our design, in our service and definitely in our beer.”

Customers have found much of what the Krupskis imagined since New York Beer Project opened in November in a two-story, foundry-style structure built from scratch on Transit Road in Lockport, just north of the Erie County line.

One key ingredient has been missing, however: NYBP beer.

That changes at 5 p.m. Wednesday, when the fourth – and largest – craft brewery in Niagara County starts pouring its first five standard brews, as well as three specialties. They will replace several other regional draft beers that fellow Western New York craft breweries provided to the Beer Project while brewers Jason Crossett and Jared Lewinski put together their first big Beer Project batches. 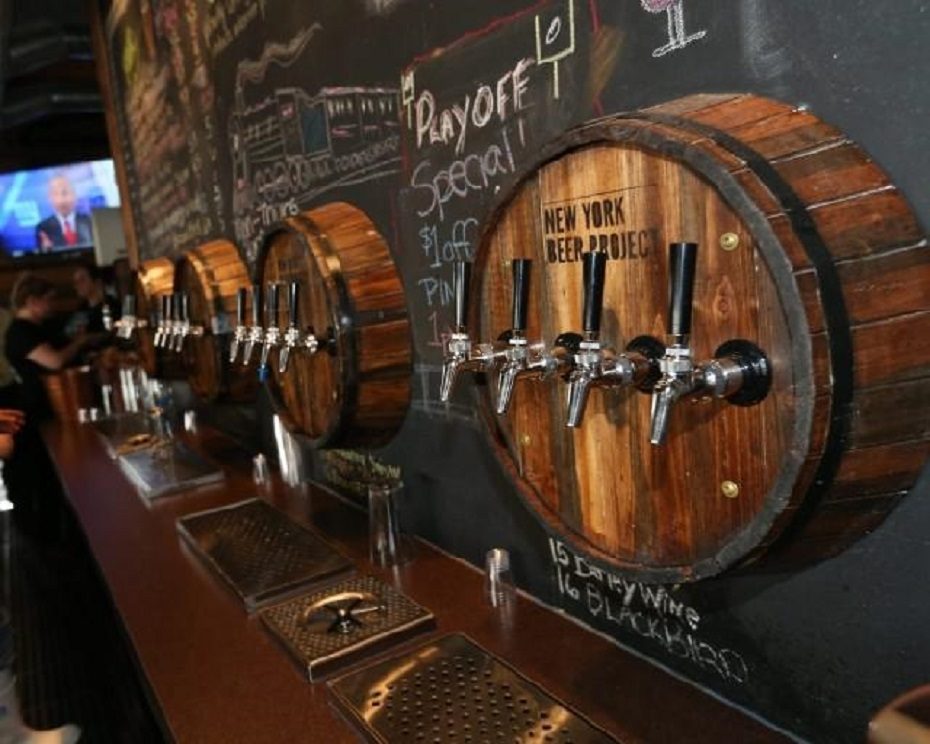 The taproom in the New York Beer Project in the town of Lockport will soon start serving beers made at the new brewing company. (Sharon Cantillon/Buffalo News)

The standards will include Lockport Lager, Destination India Pale Ale, Train of Thought Amber, Chocolate Milk Stout and Huckleberry Wheat. They will be served in flights, goblets and pints, the latter of which cost about $5 to $7. Members of the “Mug Club” will get discounts.

“We want to focus on our core beers and get them to the best quality we can get, and be consistent with them,” Crossett said, “and work with our seasonals and continue to bring out new beers.”

Taking a page from trendy brewers like Dogfish Head in Milford, Del., Crossett calls himself lead brewer and happiness cultivator. The suburban Syracuse native left a job in the financial field to follow his passion for beer-making. He interned at Resurgence Brewing Co. on the West Side and lives in North Tonawanda with his 3-year-old beagle mix named Barley, who loves dog treats made from spent grain.

Lewinski, who grew up in central New Jersey, is the brewery’s Kick-(butt) Duke of Stuff and Things in Cups. He cut his teeth at Modern Times Beer in San Diego, Weyerbacher Brewing Co. in Easton, Pa., and Silversmith Brewing in Niagara-on-the-Lake, Ont. Bespectacled, he finds comfort in a sweatshirt, knit cap, and beard akin to the brewers on the Samuel Adams TV ads.

Both are in their early 30s and graduated within the last year or so from Niagara College Teaching Brewery in Niagara-on-the-Lake. The college also counts Dave Collins, brewmaster for Resurgence, among its graduates.

“We hired them when this place was a pile of dirt,” Kelly Krupski said during an interview at NYBP during the holidays. “They believed in us and we believed in them. We’re glad they’re here.”

Crossett was among a slew of brewmaker prospects who read the couple’s classified ad last spring in the online trade publication ProBrewer.com, visited Lockport and shared their brewing philosophies, and beers, with the Krupskis. Lewinski was recommended by a brewery consultant the couple hired.

“Ninety percent of our job is cleaning,” Lewinski said. “Sanitation is key. You can’t make good beer without good sanitation. Basically, we’re yeast wranglers and janitors. That’s what brewing is for the most part.”

“C’mon,” Kelly Krupski said, “you’ve got to glorify it a little bit, but it’s true. These guys are so creative.”

The Krupskis got a commercial loan through Key Bank to build their $3 million-plus project on the site of a former motorcycle repair shop owned by Walter Kohl. They’re toying with the idea of naming a beer for the late popular town figure. Maybe Walter’s Kolsch?

Despite its historic visage, construction of the 17,000-square-foot brewery started from the ground up in April.

New York Beer Project has been so busy since it opened, the Krupskis have expanded the parking lot, twice.

It’s a good start for a parochial school music teacher-turned-designer and her CPA husband, Lockport natives who live a half mile from their new business.

Crossett and Lewinski ply their trade in a 5,000-square-foot swath packed with 15-, 30- and 60-barrel tanks on the east side of the brewery space, alongside a taproom that will tout at least eight of their creations at all times. The New York Beer Project also will carry only New York State wines – including many crafted within miles of the property – and as many spirits produced in the state as possible.

A sprawling gastropub alongside the taproom often bustles. It’s design is rooted in New York City, particularly Grand Central Terminal. A replica chandelier like the ones at the historic Manhattan train station dangles over the U-shaped bar in the room. A large painting on a north wall astride the bar features three ticket windows.

A sign above the hallway leading to the bathrooms – we won’t spoil the surprises there – reads, Grand Central – New York Beer Project. The letters N-Y-B-P are painted beneath the words in the familiar yellow, blue, green and red circles ubiquitous on the New York transportation system.

“We have a 1930s New York steampunk feel going on,” Kelly Krupski said. “Everybody loves the city and we’re very far away from it. You can come here and get that kind of vibe.”

The place also includes three outdoor “beer garden” patios for better weather days, an upstairs indoor beer garden where folks can sip beers while they play supersized Jenga and other games, and an upstairs “Cask Room” that holds up to 70 patrons for private gatherings.

The Krupskis have steadily added to their staff since opening. It’s up to about 130 employees. The couple have lured top managers and kitchen staff from the Seneca Niagara Casino, Cheesecake Factory and Gordon Biersch brew pub.

Food options include burgers – Central Park, Times Square, and the Flat Iron among them – served on rolls made at Tom Cat Bakery in Queens; salads including the Radio City, Babe Ruth and New Yorker; Lockport Legend and Herald Square rotisserie chickens; and Coney Island, Union Square Market and the Buff Chick pizzas. Several dishes will include some of the new beers in their recipes.

The Krupskis also looked locally for key suppliers. A catering crew at the YWCA made up of those victimized by domestic abuse make their pretzels and pies. After five weeks in business, the program had to add six new people, Kelly Krupski said. New Day Coffee, in Wheatfield, is roasting a special blend of coffee beans for the Coffee Milk Stout, Vertical Vines of Lockport will provide hops for many of the brews, and three farms have offered to take the brewery’s spent grains.

The Krupskis and their brewmasters look forward to the day when the operation is pumping out enough beer to also sell to taverns, grocery stores and other retailers in the region – and beyond.“This is actually a project and that’s why we called it the New York Beer Project,” Kelly Krupski said. “We can take our Lockport beer to Syracuse and the New York State Fair. We can take it to the New York Yankees.”

The owners and brewers expect the next six months to be hectic. “After that,” Lewinski said, “we’ll have a better idea of what’s happening.”

He and Crossett also want to experiment with their beers, finishing off some of them in oak casks. It’s part of a brewmaking passion that started in their kitchens, continued at Niagara College and now will include the NYBP pilot system.

“If we want to make a beer that tastes like Fruit Loops, we can do that,” Crossett said. “It’s a pretty cool industry and we’re able to do a lot of cool things. I’ve tried pineapple, jalapeño. We’ve done a mango beer with habaneros.”

The duo also would like to collaborate on brews with some of the beermakers who enabled the Beer Project to get through its first several weeks.

“The camaraderie of the industry is pretty phenomenal,” Crossett said. “There’s not a lot of industries that have that companionship and idea of brotherhood. People will help each other out.”

Brews generally will cost $5 to $7 a pint

Lockport Lager: A Czech-style pilsner, pleasantly bitter, bold, crisp and refreshing. A great compliment to chicken wings.
Destination: The house IPA mixes New Zealand and American hops, and gets a name that bows to the Grand Central Terminal theme in the gastropub. Citrus characteristics with a dry malt backbone.

Train of Thought: Hoppy amber beer. A balance of hops and sweetness with caramel, nut and citrus characteristics.

CMS (Coffee Milk Stout): Coffee from New Day Coffee Roasters in Wheatfield is used in this stout which harmonizes coffee with hints of pale and dark chocolate, milk, and lightly toasted bread. Will be served Nitro style, by infusing nitrogen into the beer lines so the pour at first will have a layered look, like Guinness.

Buckleberry Wheat: An American wheat beer brewed with boysenberries, blackberries and wild huckleberry juice, the later to give it a slightly sweet taste with wisps of lemon and lime peel, and melon.

Russian Imperial Stout: Chockfull of chocolate, ranging from milk to dark, with a complex malt sweetness and hints of nuts and toasted breads, Finishes with vibrant blooms of fig and dark fruit in balance with sticky toffee.