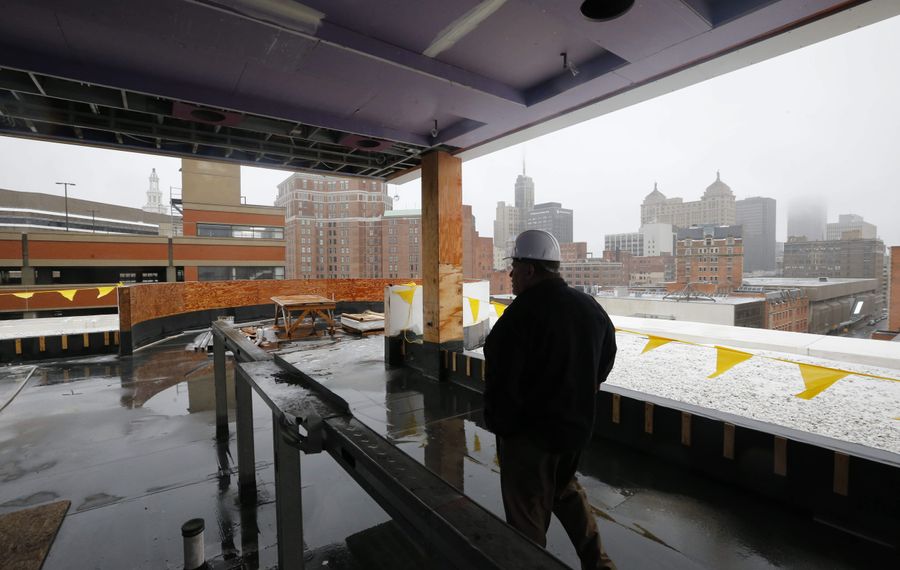 The newest upscale boutique hotel in downtown Buffalo is a few months from opening its doors, with features such as a revolving bar, heated toilet seats and Roman baths that target a high-end clientele and harken back to a different era.

Developer and hospitality entrepreneur Mark Croce hopes to open his new Curtiss Hotel at the corner of Franklin and West Huron streets by late April, just in time for the start of the peak spring and summer travel seasons. The project has been years in the making after it was delayed so Croce could focus his attention on buying and refurbishing the first floor of the Statler Hotel, now called Statler City.

“This will be the most exclusive property in Western New York,” he said. “It’ll be truly a full-service hotel in a boutique package.”

The project, now estimated at $20 million because of upgrades, will create a 68-room full-service hotel inside the renovated Harlow C. Curtiss Building at 210 Franklin St., with amenities that aren’t found in other area hotels, Croce said.

He said it will be comparable to the smaller 28-room Mansion on Delaware Avenue, known for its elite four-diamond status and white-glove butler service since its debut in 2001. But he said the Curtiss, with its spa, three-meal restaurant and onsite kitchen, will be more full-service than the Mansion. “There’s lots of excitement around it,” he said.

Crews for contractor R&P Oak Hill just finished installing the new 28-foot-diameter revolving bar for the first-floor restaurant, which will be named Chez Ami to recall the legendary restaurant of that name that graced Delaware Avenue in the 1940s and 1950s. The donut-shaped bar platform, including its patrons, will rotate twice an hour, “at a non-discernible speed” to give patrons a 270-degree panoramic view of the city through giant picture windows. Croce said the closest such revolving bar is in Manhattan.

Workers are nearly finished with the framing for the restaurant and lounge, which will also offer patio seating along West Huron, and contractors are “working their way down, floor by floor.” The hotel will also feature the city’s “first and only all-weather urban hot springs/Roman Bath experience,” in a spa area adjacent to the valet porte cochere and main entrance, according to the project’s website. It also includes a fitness center, massage rooms and a men’s boutique hair salon, which will be operated by Leon Studio One.

Upstairs, the guest rooms include touch screens that can control the climate settings, message displays and other features, as well as remote-controlled heated toilet seats and water in the marble-and-mahogany bathrooms. “We really upgraded all the bathrooms and fixtures,” he said. “It’s a very, very high-end toilet that you usually see in the most expensive homes.”

Completed in 1913, the six-story, Chicago-Commercial and Renaissance Revival-style building is one of the largest terra cotta structures of its type and period in the city. The 57,500-square-foot was named for prominent Buffalo attorney and real estate investor Harlow Clarke Curtiss, and designed by his brother-in-law, architect Paul F. Mann. Among its earlier occupants was the Kittinger Furniture Company, as well as various lawyers, medical firms and other professionals, but never Curtiss himself. The building went through a series of successive owners and tenants over the ensuing decades, but was vacant by the early 1990s.

Croce bought the Curtiss in 2002, and then added the adjacent former Continental nightclub and a parking lot in April 2009. At that time, he first unveiled plans for a glamorous new hotel with banquet facilities, meeting space and a boardroom that would incorporate all three properties, but scaled back those plans after he bought the Statler and began to bring that back to life with a focus on its first three floors as a banquet destination. He kept the restaurant and lounge concept for the Curtiss, but added more rooms and other features instead of creating a catering and entertainment competitor to the Statler.

The project, which started at $18 million, was held up as Croce lined up financing, including a $1.35 million Restore New York grant from the state and $685,000 in tax breaks from Erie County Industrial Development Agency. He also obtained a listing for the building on the National Register of Historic Places.

Meanwhile, work is proceeding on the Statler itself, where Croce is investing at least $6.7 million of his own funds and another $5.3 million in “city-by-city” funds from the state to stabilize and enhance the 19-story former landmark hotel on Niagara Square. Croce already restored the first three floors for catering, banquets and other parties over the last five years, but is eager to work on the building’s facades, entry ways and marquees.

“That’s the last step to getting the curb appeal to where we want it to be, and then we can start planning the upper levels,” he said. “I think you’re going to see a lot of interest. It’s in one of the most strategic locations downtown.”

He said city officials had notified him that his application for the public funding is now being reviewed at the state level. Once approved, the money will be held by the city, and Croce will seek reimbursement for his future expenses. So far, though, none of the money spent on the project has come from the government. “I’m almost completed with everything I’m obligated to do, and the state is finally in a position to invest what they promised to do,” he said.