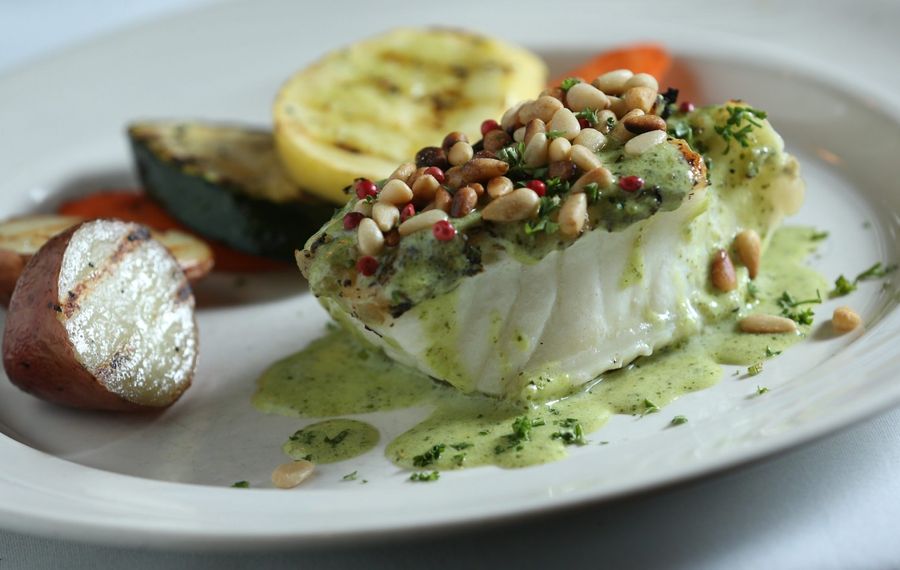 A restaurant’s people are as important as its products. The face that greets you when you come in out of the cold and the hands that prepare your meal shape your experience more powerfully than its physical manifestations: the walls, the furniture, the plates. Over decades of steady performance, furniture and plates become worn. They break. So do people, except they are much, much harder to replace. ¶ That is at the heart of what makes San Marco such a precious restaurant. Frank Grimaldi has greeted its customers since Walter Mondale was nominated to run against Ronald Reagan. After settling in, they learn what the chef, Frank’s wife, Nancy, has ready for dinner. Nancy can really cook, and Linda Kiah has been her sous chef for the last 28 years, which helps explain why San Marco’s cuisine has the polish of a much larger operation.

There are only 65 seats in the Grimaldis’ Kensington Avenue restaurant, even after the addition of a room lined with wine shelves 10 years ago. That was where our table was, a charming setting even after Frank, with apologies, had to reach around behind me mid-meal for a bottle. It’s wine and beer only, no liquor.

The menu is a tidy compilation of Northern Italian dishes that fits on two pages. From beginning to end, our meal was well-seasoned, portioned and sauced with restraint. San Marco is not playing to the take-it-home crowd.

Gnocchi del Barone ($9) were potato dumplings in a soothing gorgonzola cream sauce with a touch of cheesy funk, and we chased the remaining sauce with bread. The dumplings were moderately light, with some chewiness. A Caprese salad ($10), with sliced fresh tomatoes, a pair of dainty artichoke hearts, olive oil and fresh mozzarella, made me wonder how the kitchen found good tomatoes in December. An arugula salad ($9) sported crumbled gorgonzola and toasted pine nuts.

Pappardelle ($28), one of San Marco’s housemade pastas, was dressed with velvety shreds of beef shank and soft carrots in a sticky, savory demiglace-like sauce scented with basil. Tagliolini al tartufo ($24) was fettucine-like pasta in intense mushroom cream, topped with sautéed shiitake mushrooms. It was flavored with truffle oil, doubling down on the umami notes. A month ago I got a major dose of white truffles, which might explain why the truffle oil seemed overpowering, like a lady wearing too much perfume.

We’d asked for an entrée risotto of the day ($28), which was more mushrooms fortified with truffle oil, and creamy al dente rice. My grilled sea bass with pesto ($36) was an inch-thick slab of fish, perfectly cooked, with browned edges and a moist, flaky interior that combined sea with meadow notes from the pesto.

The grilled wild boar tenderloin ($28) and the venison loin ($35) were both ideal meat presentations, seared exteriors giving way to rosy centers. The cherry Barolo sauce with the boar was exquisitely calibrated, emphasizing the best qualities of each, and I could see how dishes stay on the menu for decades here. A similar sauce pointed up the husky notes in the venison. Yet there was a sameness about the meat and fish entrees, with identical accompaniments of grilled zucchini, carrot, summer squash, potatoes and Portobello slice, that made me wish for a breeze of change.

Our server was personable and timely, but I noticed San Marco doesn’t go for grander flourishes like simultaneous entrée placing. Ours came in pairs, with a gap of a minute or two.

Desserts ($8) included a housemade tiramisu that was the most delicate version I can remember, cake layers separated by a discreet amount of cream and a mere suggestion of espresso. Another favorite was the limoncello tartufo, a single-serving bombe coated in zingy lemon crumbs, with a lemon center, and a warm apple crostata with a soft crust, lots of tender fruit and excellent cinnamon gelato.

Almost 32 years after it opened, San Marco offers a polished lineup of Northern Italian deliciousness, time-tested dishes that work. It succeeded in avoiding unpleasant surprises, but left me missing a little surprise, or the chance of one, at least. That makes me sound like a professional critic, which I am. That does not detract, however, from what the Grimaldis have achieved over the decades, and maintain today: one of the best Italian restaurants in Western New York.

Honing menu for decades, couple delivers one of the area’s best Italian restaurants.