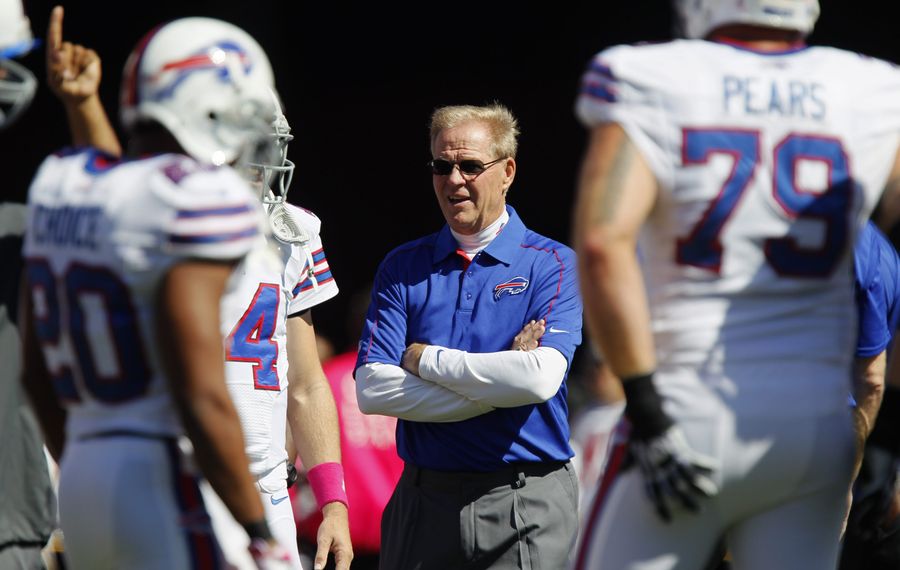 The topics live, side by side, within Bruce DeHaven’s psyche. They’re constantly pondered, but rarely discussed.

As long as he’s plotting kick coverages and return schemes, working with players on the practice field and in the meeting room, soaking in every drop of joy from his continued involvement in the sport to which he has devoted most of his life, he’s in the happiest of places.

“You think about it every day; I don’t know how you couldn’t think about it every day,” DeHaven said of learning in early May that he has prostate cancer. “But I don’t dwell on it like I was when the diagnosis first came through. Now, I’m so busy that it’s actually been a godsend for me that’s helped me kind of come to terms with it.

“I’d hate to be sitting around not doing anything now.”

What DeHaven, 66, is doing is what he has done for the past 46 years – coaching football, a journey that began at the junior high level. He’s on the way to completing his 29th season of guiding special teams in the NFL, something he has done as well as anyone in the history of the league.

DeHaven began building that reputation with the Buffalo Bills, from 1987 to 1999, during which he was an integral part of their Super Bowl run. He had a second stint with the Bills, from 2010 to 2012. Besides the Panthers, whom he joined in 2013, DeHaven’s other NFL employers have been the San Francisco 49ers, Dallas Cowboys, and Seattle Seahawks.

But his strongest bond will always be with the Bills, something reinforced by his extensive face time in the ESPN “30 for 30” documentary “Four Falls of Buffalo” that aired Dec. 12. DeHaven provided some necessary perspective on “Wide Right,” reminding everyone that Scott Norwood isn’t defined by one kick – that he had an outstanding career and showed such great character and strength in dealing with the incredibly painful aftermath that DeHaven’s adopted son is named Tobin Scott.

Buffalo is also where DeHaven still keeps his primary residence, to which he commutes to be with his family and for treatments at Roswell Park Cancer Institute.

His focus now, however, is on the Panthers. That’s what helps prevent, or at least minimize, those moments of wondering and worrying about his health. And DeHaven’s focus is so narrow – as is the case with the rest of the Carolina coaching staff and the players, per the tone set by coach Ron Rivera – that the prospect of a perfect season is also a distant thought.

“Ron has done a great job of never talking about that and just everything has been about the next ballgame,” DeHaven said. “People are really pointing a lot more towards where we can go in the playoffs and how far we can go there as opposed to getting the undefeated season. You can’t help but know that we haven’t lost a game, but I don’t think that anybody’s going, ‘Boy, we can’t lose a game.’ ”

It’s the same with DeHaven’s fight with the most persistent opponent he has ever faced: cancer. He can’t help but know of its presence in his body. He just chooses not to let it infiltrate his day-to-day existence.

If the subject comes up, it’s generally because he takes a call like the one I made to him earlier in the week and gets asked questions he’d prefer not to answer – but does reluctantly.

“It was just a normal physical exam,” DeHaven said of how he found out he had the disease. “Talking with my doctor, it was almost an afterthought. I was in there doing a yearly physical and he said, ‘Well, maybe we ought to do a little further checking here on some of the things.’ Nobody seemed to be very alarmed. And then the biopsy came back that it was cancer and we just proceeded from there. And then every day, the news got worse for about a week to 10 days there. Just when you thought it couldn’t get any worse, it did. The average lifespan for what I’ve got is three to five years. It may be longer than three to five.

“When I left Charlotte to go up to Buffalo, to Roswell Park, last spring, I didn’t think I’d coach again. Just from what I was being told, I just didn’t think I’d coach again. And just the fact that I’ve been able to do that means that my health has continued to be better. I’ve been fairly fortunate that the treatment that I’m under, physically, has allowed me to still do this.”

Which is all DeHaven wants to do when he isn’t with his wife and their two children.

“I just love coaching and teaching, I just dig it,” he said. “I love being in the meeting room, I love being out on the practice field. The games are really just kind of frosting on the cake. It’s all that other stuff I enjoy every bit as much as I do the games.”

The 2015 Panthers remind him of those early/mid-’90s Bills teams. Not so much in terms of overall talent. The Super Bowl Bills have the edge there, because free agency and the salary cap don’t allow anyone to load up on top-tier players as much as the Bills did back then.

What DeHaven identifies as the common thread between his current and former clubs is exceptional chemistry. The most impressive quality he sees is that the coaching staff and the front office, led by General Manager Dave Gettleman (who began his scouting career with the Bills during DeHaven’s first stint in Buffalo), are on the same page.

“And you can’t say that everywhere in the league,” DeHaven said. “Everybody gets along. Other places that I’ve been, there just wasn’t the same feeling that I got from being around the locker room and even the guys on the bus when we travel. It feels a lot like it did in Buffalo.”

One significant difference is that the Panthers don’t have the consistency of strong special-teams play that the early/mid-’90s Bills had. DeHaven doesn’t have those reliable contributors such as Steve Tasker or Mark Pike.

“We’ve still got a ways to go,” he said. “It’s been exasperating. We’ll go along for a couple of ballgames and really play well, and then, all of a sudden, just have a stinker of a play. We play Tennessee and we have five tackles inside the 20. The next week we give up a kickoff-return touchdown.

“We’ll just play lights out and overwhelm people and then we’ll make a mistake that kind of bites us. We’re just not where we need to be yet. We’re getting better, we’re improving every week. We’ve been helped a lot by our offense and defense playing so well. We need to hold up our end a little bit, but I think we’ll get there.”

DeHaven hopes for the best in his cancer fight. He continues with treatments as he continues to work.

And he’s able to do his job with the assurance that the Panthers are fully behind him. Jerry Richardson, the team’s owner, made that clear to DeHaven before the first treatment.

“You hope that’s a way that all of the owners would act, but they don’t.”

Vic Carucci– Vic Carucci covers the Bills and NFL for The News. With four decades of experience as a pro football writer and broadcaster, he is a co-host on SiriusXM NFL Radio and a Pro Football Hall of Fame selector. Vic has authored 10 books about football (including multiple New York Times best-sellers) and is a past president of the Professional Football Writers of America.