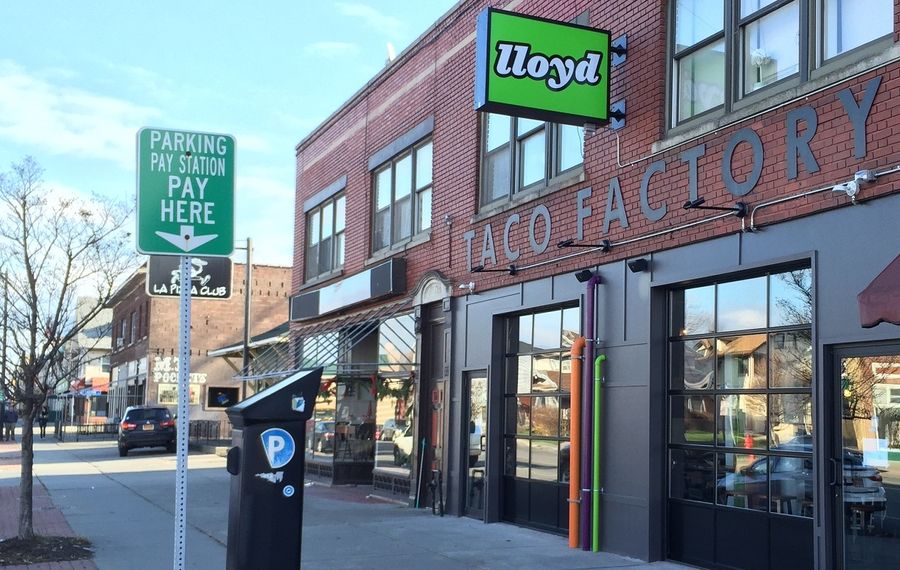 Months after Lloyd Taco Factory’s owners accepted a deal for 25 percent of their company with television cameras watching, they changed their minds and exercised their right to turn it down, Peter Cimino and Chris Dorsaneo said.

The Lloyd owners decided to get a bank loan instead. That decision, construction delays and the decision to start a tortilla business contributed to pushing the opening of their first brick-and-mortar restaurant, at 1503 Hertel Ave., to early next week.

Lloyd Taco Factory’s menu includes all of the standard tacos, burritos and nachos that have made their four-truck fleet a hit in Western New York. The recipes are the same, using meat that is raised without antibiotics or hormones, and organic black beans. Truck specials like the “Dirty South,” with fried chicken and waffle crumbles, and the vegan "Skinny Thai," with fried tofu and peanut sauce, will be on the permanent taco list there. Its chef will be longtime Lloyd staffer Teddy Bryant.

The Sonoran Dog ($5.59), is a Mexican hot dog that's wrapped in bacon and topped with colorful, crunchy toppings like onions, tomatoes and cilantro. (Andrew Galarneau/Buffalo News)

The Cortez Salad ($4.99) is a play off of the Caesar salad, topped with "croutons" made from sliced and deep-fried burrito tortillas. Pumpkin seeds are a nice surprise hidden within. (Ben Tsujimoto/Buffalo News)

The full bar features a list of craft cocktails and tequilas, though mezcal will be a specialty, said bar manager Yuri Polyachenko.

The cocktail list from Lloyd Taco Factory includes a likely favorite in the Snozzberry Mule, plus complex Gin and Juice Punch, which can be ordered by the glass ($8) or pitcher ($28). (Ben Tsujimoto/Buffalo News)

Left is the Gin and Juice Punch ($8) and right is the Chic-a-Cherry Cola ($10) from Lloyd Taco Factory. (Ben Tsujimoto/Buffalo News)

After four months of further research and meetings with restaurant investors Tim Love and Joe Bastianich, the Lloyd owners decide to pass, for now, they said.  “In the fine print, what happened on the show wasn’t legally binding,” Dorsaneo said, acknowledging that the show could have left another impression. (There is a disclaimer at the end of the show, noted Cimino.)

“We wanted to wait until we were open to make the announcement that we didn’t take the investment,” Cimino said.

In the meantime, the question of what kind of tortillas Lloyd should use – an issue aired on the show – led the partners to pursue making their own. They formed a company with John and Kristi Mora, called Lloyd Tortillas Inc.

John Mora is Mexican, from Teocuitatlan de Corona in Jalisco, with relatives in the tortilla business, he said. At Lloyd Taco Factory, Mora is overseeing the production of masa and tortillas from corn kernels. The corn is soaked in a lime solution and hulled, a process called nixtamalization, which frees the corn’s nutrients and makes it possible to form the ground corn into usable tortillas.

The tortilla-making machine in action, as perfectly shaped corn tortillas are cut into circles and grilled lightly. (Ben Tsujimoto/Buffalo News)

At present, the tortillas, made on machines visible behind glass in the Lloyd Taco Factory dining room, will only be used in the restaurant. Eventually the Lloyd tortillas and fresh masa dough will be available for sale, Cimino said.

Send your restaurant news to agalarneau@buffnews.com