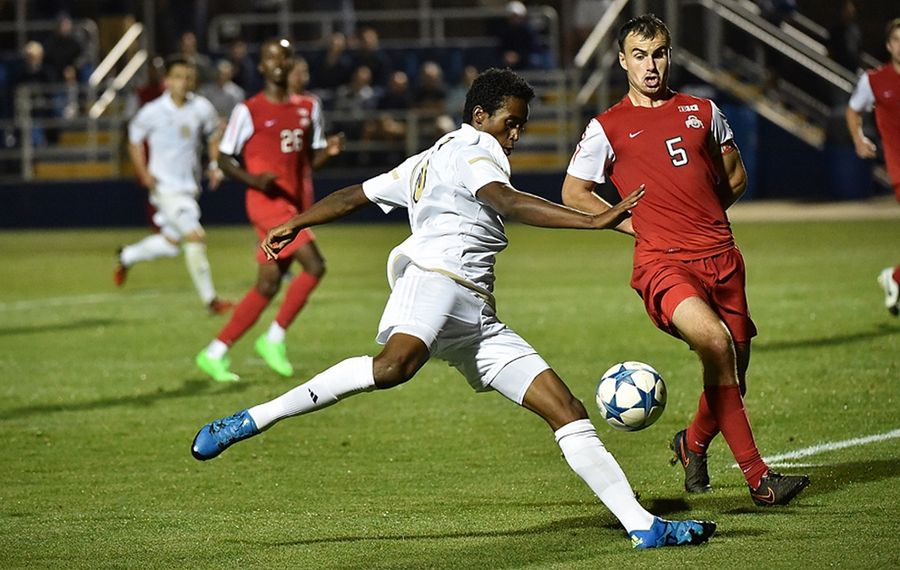 He doesn't grab national headlines like teammates Richie Laryea and Adam Najem, nor is he a grizzled upperclassman leader like Andrew Souders, Brad Ruhaak and Jake Fenlason, but Ezana Kahsay plays an important role for the Akron Zips men's soccer team.

A 2013 graduate of International Prep in Buffalo, the red-shirt freshman is not a starter for the country's No. 5 ranked squad, which hosts Creighton at 4 p.m. Dec. 5 in the quarterfinals of the NCAA Tournament. More often than not, Kahsay watches intently from the sideline for the first 80 minutes or so of a match, mentally preparing to make a late entrance.

In many ways, the role isn't enviable. It demands focus -- a strong mind to stay tuned in to a match, to take note of an opponent's small weaknesses for future use -- but also smart physical preparation, mostly through intermittent, repetitive warm-ups on the sideline.

In nine of Akron's 22 matches this year -- including Akron's 2-1 win over SMU in the third round last weekend -- the mental and physical readiness went unrewarded, as Kahsay didn't see the field.

The native of Eritrea understands he has three more years of eligibility at one of the nation's best programs, so he's accepted the role. A physical specimen at 6'2, 180 pounds with a long stride and exceptional leaping ability, Kahsay's sheer athleticism is a nuisance for foes trying to press for a late goal.

Akron's two NCAA Tourney wins may be tough to swallow for Buffalo soccer fans, as the University at Buffalo fell to the Zips, 1-0, in the Mid-American Conference final. But the development of Kahsay, who played in both matches against the Bulls this year, is a consolation.

[For greater detail into Kahsay's roots and path to Akron, read this 2014 feature by The News' Tiffany Lankes]

Here's BN Soccer's short chat with Kahsay over the phone this week, abbreviated for length.

BN Soccer: Last year's NCAA Tournament run was short-lived for Akron (a 13-12 loss in penalty kicks against Ohio State in the first round), but you haven't stumbled so far this postseason. How is the mood of the team different?

Ezana Kahsay: "We're more motivated and confident. Each win makes us more pumped for the next one. With SMU, we knew defensively they were good, but it really wasn't a surprise for us. We've played Georgetown, Maryland and Wake Forest [during the regular season]. Those games were a big help."

BN Soccer: Explain the role that coach Jared Embick has you playing for Akron, where you enter the match in the waning moments.

Kahsay: "I'm told to keep the score where it is, to help the team defensively. It's my job to make it difficult for them and give them no hope. It's basically just bringing energy and defense. I like it -- our starters have been doing well, and I'm there to support at the end. I hope I'll be doing better in the future, but I have a very specific role now."

BN Soccer: Do you always play the same position when you are subbed in?

Kahsay: "In spring I was a center forward, but this year I've been on the wing and at center midfield. I usually play [one of] two or three different positions -- it really depends who else is in [the game]. [The positional uncertainty] is difficult now and then, but we train really hard, and you don't always know where you're going to play when you get to practice. Recently, it's been mostly right wing or center midfield."

Akron's Adam Najem likely has a professional career ahead of him. He's served as a role model for Kahsay and his Zips teammates.
(Photo credit: Ernie Aranyosi)

BN Soccer: What's it like training with and against Richie Laryea and Adam Najem every day in practice?

Kahsay: "It's great. They compete every day. They're role models, and they'll support whoever needs it. They come out every game ready to go, ready to play with their teammates. They're very talented individually, but they play within the team."

BN Soccer: What has the preparation been like for Saturday's match against Creighton?

Kahsay: "We've looked at our mistakes from our last game [vs. SMU] and will try to improve on them."

BN Soccer: Who have you stayed in touch with from Buffalo, whether it's from I-Prep or somewhere else?

Kahsay: "I talk a lot to Mr. Mike [Masecchia, a former soccer coach at I-Prep] and Mr. Alessi [I-Prep's current coach] and some of the other teachers. I'm really grateful for all of them. Mr. Mike still texts me after games -- he said he wished I'd played more minutes against UB and told me to keep working hard. His texts really get me going."

[In addition to International Prep, Kahsay has also played locally for youth premier club Black Watch and BUSS of the Buffalo District Soccer League (BDSL) and spent last summer with the Portland Timbers U-23s in the Premier Development League (PDL).

The year after Kahsay's graduation, International Prep won a state championship under head coach Anthony Alessi, who's hoisted into the air by his players in this photo. (Derek Gee/Buffalo News file photo)