It's all in the lease
Interesting correspondence over a University District student housing complaint:

Nov. 5: "My office has received a complaint regarding the above-referenced property that you own in the University District,"  Councilman Rasheed Wyatt wrote to the property owner, Buffalo Student Housing of Hicksville. "The complaint is as follows: Student parties are out of control at this property. Homeowners are very annoyed by the loud music and noise during the late nights (1 a.m. to 4 a.m.)."

Nov. 9: "Hi Guys," Buffalo Student Housing emailed its tenants. "We received the attached letter from the City of Buffalo today regarding out of control parties and noise late at night from you guys. The neighbors are complaining. This is totally unacceptable and you must put an end to the parties and late night loud noise and music immediately. The city has notified the police department and you guys are now being watched and are on their radar. . .  As per your lease number 11J you are being fined $100 to be added to your December rent. I do not think any of you want to risk being suspended from school. If we receive another complaint you will be forcing us to evict you from the premises. "

Nov. 10:  "...I have attached a copy of the notice we sent to our tenants immediately after receiving your letter, putting them on notice," the property owner wrote to Wyatt.

Name that bouncer
It was some time after the Molly's Pub assault that Council President Darius Pridgen heard from a young woman who says she was roughed up a bit by a bouncer, who handcuffed her to a gate outside a club. He eventually let her go, but when she asked the bouncer for his name, he refused to give it to her.  The city currently requires bouncers to be licensed from City Hall, but it seems very few comply, and the city does little enforcement. Pridgen wants to change that by moving the license requirement out of the City Clerk's office and into the city Permits & Inspections office. He wants all bouncers wearing badges with their names on them. The license would be $35 and have to be renewed every three years. The Common Council will likely take up the topic next week.

Updates:
A few days ago City Hallways mentioned that the homicide log on the city's website hadn't been updated since Oct. 26.  The city web site has  since been updated, and includes all homicides, right up to the last one on Nov. 29.
City Hallways also recently reported receiving a letter from a reader concerned about the condition of the women's public bathroom in City Hall. The item sparked a response from a man, who said the men's public bathroom in City Hall isn't any better. 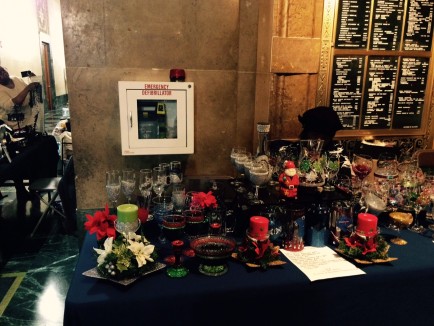 In today's Buffalo News and buffalonews. com,  my colleague Lou Michel and I have story on  security updates occurring and planned in Buffalo and Erie County -- including at Ralph Wilson Stadium- given all the violence  in the nation and  world of late.