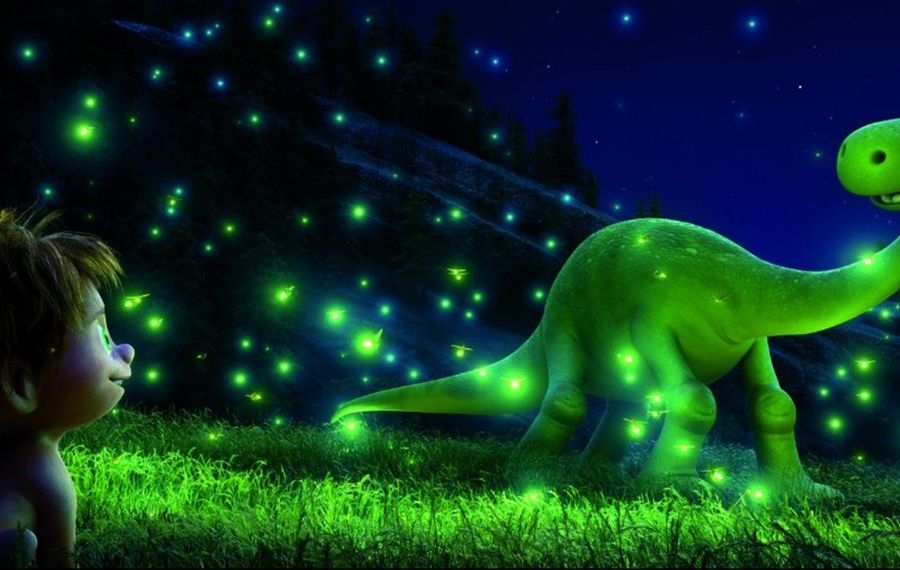 Pixar’s latest entry, “The Good Dinosaur,” is a disappointing effort that has the misfortune of arriving during the same year as “Inside Out.” The latter was one of the animation studio’s most stunning achievements, an imaginative joy that ranks among its finest films.

Pixar’s second release of 2015 is pretty weak, actually. In fact, “The Good Dinosaur” is weaker than virtually every other studio entry. While it’s easy to criticize the likes of “Cars,” “Brave” and “Monsters University” for being “lesser Pixar,” they are still creative, entertaining films.

“The Good Dinosaur,” though, is something different. Dark, violent, poorly scripted and often ponderous, it feels like a rushed affair from some very talented filmmakers. (The film’s backstory involves a complete reworking with a new director and different cast.)

That it remains watchable is a testament to the animators and voices who brought the film to life; even lesser Pixar is stronger than most animated product, especially those belched out by DreamWorks, et al.

It’s a Western, really, and that’s a first for the studio. The film’s opening scene sets the stage with a “what if” – what if the asteroid that struck earth and killed the dinosaurs … missed?

We jump ahead millions of years and meet Arlo (voiced by young Raymond Ochoa), the meekest child of three. The Apatosaurus lives a simple life with his farming family, headed by his Momma (delightfully voiced by Frances McDormand) and Poppa (a note-perfect Jeffrey Wright).

Smaller and far more fearful than his brother and sister, Arlo seems unable to successfully complete even the simplest task on the farm. These early scenes are the film’s cleverest, as the dinosaurs use their heads to plow and “water” the crops with their mouths.

But the quiet of home is soon disrupted, thanks in part to a scrappy, animalistic human child, Spot. The little thief sets in motion a series of events that leads to the sad death of a major character, an intense moment that seemed to stun the youngest moviegoers at the screening.

This is not atypical for a Disney film — we’ve all seen “Bambi.” But it feels particularly brutal here, and the flashbacks to this event are even worse. For better or worse, the tragedy sets the stage for the wall-to-wall calamity that follows as Arlo becomes separated from his home and family.

Much of this is violent, mean-spirited and forced; there’s even a near-death experience. Perhaps the studio felt a need to compensate for the weak script with emotional jolts, but it’s a wrong move. (I was thankful I did not bring my 5-year-old; honestly, the film is too dark and too intense for that age.)

“The Good Dinosaur” is now a journey tale, as Arlo and his new friend Spot make the long, dangerous trek home. Much of what works here involves Spot, an initially annoying character who quickly becomes one of the film’s bright points. The friendship between Arlo and Spot feel sweet and well-formed.

Also nice is the appearance of a tough but likable Tyrannosaurus family whose patriarch is wonderfully voiced by the always-welcome Sam Elliott. The actor provides the film with a welcome dose of gravitas, and his quick exit is certainly a fail.

Most of the other dinosaurs we meet are obnoxious, unfunny and even a bit disturbing. Imagine if the scary clown sequence from “Inside Out” took up 75 percent of the film, and you’ll have a sense of what it feels like to watch “The Good Dinosaur.”

Of course, there are moments of visual majesty here to rival anything the studio has created. And for dinosaur-obsessed tweens, the film should play well. But for most viewers, “Dinosaur” is a miss. It might be unfair to compare it to something as strong as “Inside Out,” yet it’s hard not to. In the Pixar canon, “The “Good Dinosaur” must be seen as a disappointment.

Interestingly, the short that precedes “The Good Dinosaur” is one of Pixar’s best. “Sanjay’s Super Team” is a five-minute delight in which a young Indian boy envisions Hindu gods as quasi-superheroes. If only the feature that followed was this imaginative.

Two and a half stars

The lowdown: An animated journey into the world of dinosaurs where an Apatosaurus named Arlo makes an unlikely human friend.