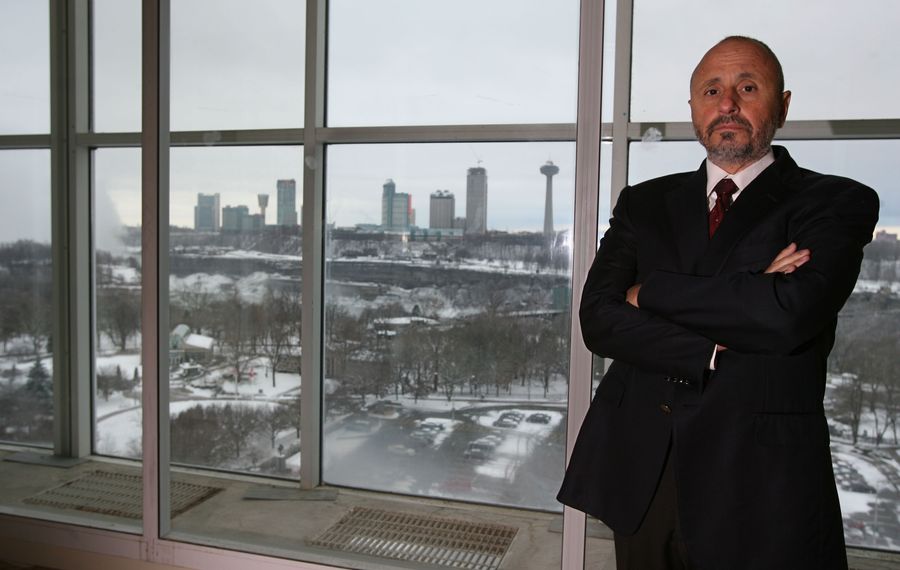 Frank Parlato Jr.’s battle with federal prosecutors, four years in the making, escalated Friday when a grand jury accused him of cheating the Internal Revenue Service and two heirs to the Seagrams liquor fortune.

Parlato, 60, faces a maximum of 20 years in prison if convicted. He will be arraigned Monday in Buffalo federal court.

The criminal charges are the latest chapter in the FBI’s four-year investigation into Parlato’s business dealings in Niagara Falls and his ownership of One Niagara, the downtown office and retail center that many still remember as the Occidental Chemical building.

As part of the probe, the government seized $1 million that Parlato received from Sara and Clare Bronfman, daughters of the late Seagrams liquor heir Edgar M. Bronfman.

Parlato, who is part-owner of Artvoice and publisher of the Niagara Falls Reporter, denied the government’s allegation that he cheated the IRS and others. In the past, he has characterized the investigation as a David-versus-Goliath type battle.

“I am innocent of any crimes and will fight these allegations until my last breath,” Parlato said in a statement Friday. “May the truth be my ultimate savior.”

Parlato’s lawyers have acknowledged the FBI investigation and the fact that their client was offered a plea deal by prosecutors in the office of U.S. Attorney William J. Hochul Jr. They said Parlato refused the offer because he’s unwilling to plead guilty to something he doesn’t believe he’s guilty of doing.

The investigation into Parlato’s business dealings dates to at least 2012, when prosecutors subpoenaed records regarding One Niagara. The building was the site of a failed plan to build an underground aquarium, and the unfinished project left a huge hole that Parlato filled in and replaced with a parking lot.

Parlato’s lawyers say the allegation that their client, through his ownership of One Niagara, defrauded the IRS, the Bronfmans or anyone else is baseless. They also say they gave evidence of their client’s innocence to the prosecution.

“We provided so much information to the U.S. Attorney’s Office on so many topics,” said Ralph C. Lorigo, one of Parlato’s lawyers. “I’m very taken back by what I read in the indictment.”

The indictment refers to the Bronfmans by the initials C.B. and S.B. and claims Parlato cheated them out of the $1 million, an allegation that dates back to at least 2011 when the sisters filed a notice of claim against him.

Parlato, who recently became part owner of Artvoice, Buffalo’s oldest alternative weekly, denies the allegation and insists the $1 million is money he earned for representing the Bronfmans in a dispute over a luxury housing development in Los Angeles.

“These charges are based on the allegations of people who conspired against me,” Parlato said of the Bronfmans and others Friday.

Parlato said he went to California on the Bronfmans’ behalf and, convinced they were cheated out of millions of dollars, worked out an agreement that gave them majority control over the Los Angeles development.

The dispute led to lawsuits by both sides, including one involving Nancy Salzman, president of NXIVM, a group based in Albany that supporters say is a successful executive coaching program. Detractors say NXIVM uses brainwashing and other psychologically damaging tactics, including separation from members’ families, to manipulate followers.

The Bronfman sisters, who live near Albany, have been among NXIVM’s better known followers.

As part of his battle with the feds, Parlato has countered with his own allegations.

In a letter to prosecutors handling the case, Assistant U.S. Attorneys Anthony M. Bruce and Elizabeth Moellering, he asked them to recuse the local U.S. Attorney’s Office from the case.

Parlato alleges that there is a perception of a conflict of interest because of Lt. Gov. Kathleen Hochul, Hochul’s wife, and her political relationship with Niagara Falls Mayor Paul Dyster, a fellow Democrat.

Parlato, as owner of the Niagara Falls Reporter, has been critical of Dyster over the years.