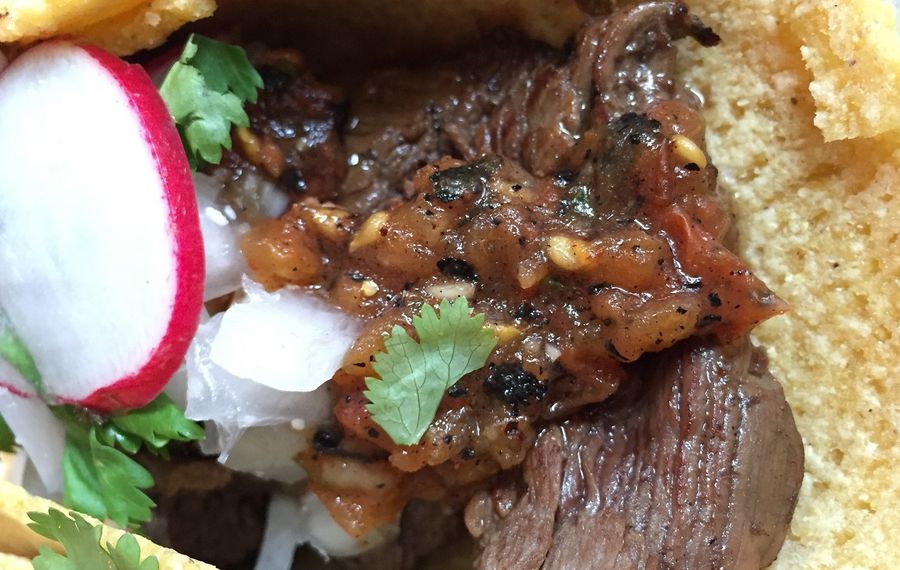 Squabbles over authenticity aside, there's an avalanche of Mexican restaurants in Western New York -- perhaps more than ever. For a new downtown eatery like Deep South Taco, which opened at 291 Ellicott St. on Thursday, the competition is thick.

The exterior of Deep South Taco, stationed at 291 Ellicott St. near its intersection with Broadway. (Ben Tsujimoto/Buffalo News)

Fortunately, the demand for the cuisine is high -- I don't think I've ever met anyone in Buffalo who recoils at the sight of a taco -- so there's no reason why DST couldn't coexist. But stand out from the masses? We'll see.

Details from our visit on Nov. 14, Deep South Taco's third day of business (Note: Obviously, since it's so early into the operation, there will be imperfections, but we just want to tell you about our early experience. Expect a lot of fine-tuning and improvement from the restaurant over the course of its first few months.):

First, here's the food menu, predicated on tacos, and then the drink menu.

*There was a 10-minute wait upon our arrival, which allowed us to poke around a bit. We learned that it's a cash-only restaurant. Work was still being completed on the front and rooftop patios, but the decor -- both inside and outside -- was vibrant, with bright tones of yellow, teal and pink as the theme and, yes, a drawing of a cactus, decked out in a sombrero, playing a guitar. The interior is intentionally dim, with fluorescent lights and some quirky decorations.

A look inside of Deep South Taco at 291 Ellicott St. (Ben Tsujimoto/Buffalo News)

*Around the corner from the main dining room is a smaller set of tables in front of the kitchen window. In warmer months, the yellow hangar doors can be opened, likely resulting in fewer tables in this narrow area. The bigger tables toward the front of the restaurant have stools for seating, while smaller tables have chairs with backs -- something to bear in mind if you're wearing a jacket and don't want to sit on it.

A set of smaller tables at Deep South Taco sit between the hangar doors and the kitchen window. (Ben Tsujimoto/Buffalo News)

Here's what we ate, with a little feedback after each:

Pros: We chose carne asada as our meat (seasoned strip steak), and that was a wise move. It was juicy, flavorful and tender. We decided that fresh jalapenos were better than pickled, in this case, and the queso was thick and rich.

Cons: The tortilla chips didn't have to be seasoned aggressively (or at all) -- they resembled Doritos in nature. The saltiness and heat from the chips hindered the dish, burying the subtle complementary flavors of the beans, tomato, green onion and even the cilantro.

Comments: Don't expect the inside of a Lloyd "El Gordo" burrito, which is fried like chicharrons but includes half-inch cubes of pork. Deep South Taco's are skin-only, appearing as air-filled puffs with a nice crackle and an appropriate amount of seasoning (smoky with a bit of heat), a nice alternative to nachos with salsa or guacamole.

Comments: Deep South makes its own corn tortillas, a painstaking process that's rare for Buffalo, and the end result is a stark departure from your typical store-bought flour soft-shell. They're heartier and a little more grainy in texture, but they hold together well despite still being soft.

As for this taco, you'd think a corn tortilla housing fried potatoes would be a little too starchy, but the potatoes provided a good crunch and the poblano peppers boosted the flavor. A good, and rather obscure, non-meat taco option.

Comments: Surprisingly, the grilled tilapia out-shined the fried version. It's a lot easier to pull off fried fish tacos -- due to the instant advantage of the crunch and the tasty glories of deep-frying -- but the grilled fish tacos weren't soggy and boasted a strong, complex flavor with the cabbage, onion and cilantro. For our taste, there could have been more chipotle mayo on the fried fish taco.

Comments: Spicier than we expected -- although our server did warn us -- but certainly not unbearably so. The ingredients might suggest a subtle sweetness, but it wasn't. Although the chicken was a little dry, the spices packed a punch -- I didn't remember anchiote being that peppery, but I honestly haven't had much annatto in my life.

Comments: Again, the quality of Deep South Taco's carne asada is terrific, but there wasn't much else to this taco, as the salsa was too timid. It was a good opportunity to test the three different hot sauces on the table: a sweet habanero (orange in color), a hot ghost pepper (red) or Tamazula Mexican hot sauce (not as hot, but a deeper, chili-pepper flavor).

Comments: The braised beef short rib was a little overcooked, but the combination of flavors here was a success, our eater said.

Comments: DST cooks a pineapple on a spit, hanging above the pork, so the pineapple caramelizes and drips down on the meat. The ensuing taco was a little light on both the meat and the pineapple, but as far as taste was concerned, it accomplished its mission.

Comments: Our resident pork-belly lover was disappointed -- accustomed to tender pork belly that essentially melts in your mouth, this was overcooked and chewy. Bummer.

Comments: Deep South Taco cooks its carnitas confit-style, which involves lower temperatures and longer cooking but makes the meat extra tender, so it's not surprising that the end product was one of DST's most tender meats we tried. I don't know how the restaurant can keep up with the demand for carnitas given the time-consuming process, but more power to them.

Like the house-made corn tortillas, it shows they care. (Also, be careful, as this one drips a bit out of the ends.)

Comments: As you'd expect, the chorizo was spicy and the dominant flavor. It was hard to pick out the other ingredients listed as a result.

Comments: This was absolutely delicious, even though I had my doubts given the ingredients. The tostada was equal parts chewy and crunchy -- which sounds impossible until you try it -- and although this was a little challenging to eat without spilling, the flavors were the best of anything else I tried (I had the carnitas and grilled fish tacos).

Weatherproof, 35-foot projection screen that's part of the front patio. Sports and classic movies are expected to be played, beginning in a week. (Ben Tsujimoto/Buffalo News)

Here's Deep South Taco's patio facing Ellicott Street. It will be heated aggressively, and it will be open soon. (Ben Tsujimoto/Buffalo News)

A glance at Deep South Taco's bar area, which has two TVs. A third graces the opposite wall for diners. (Ben Tsujimoto/Buffalo News)