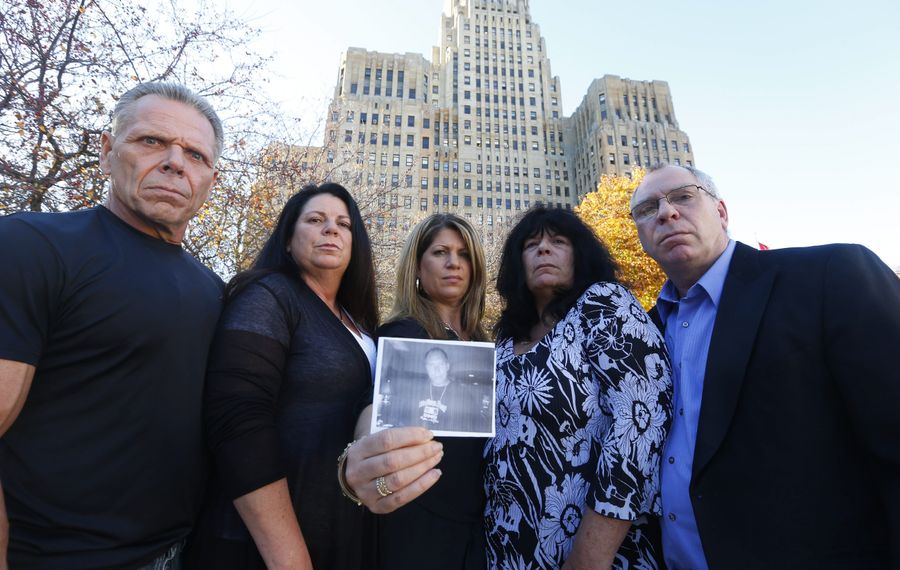 Early on in the heroin epidemic, Robert Runfola gave a name and face to its all-too-frequent fatal overdoses.

It was May 2013, and Runfola, who had battled his addiction for years, was found dead in his Buffalo home, the bags of fentanyl-laced heroin near his body.

On Wednesday, the man who sold him that deadly cocktail was sentenced to 30 years in prison.

Peter N. Militello, a 35-year-old drug dealer from the Town of Tonawanda, now has the dubious distinction of being the first defendant in Western New York to go to prison for selling fentanyl-laced heroin that killed someone.

“Bobby was an addict,” said Andrea Ryan, one of Runfola’s sisters. “Bobby was not a junkie who deserved to die.”

In May, Militello, who was facing life in prison, took a plea deal in which he admitted selling Runfola the heroin that killed him. His guilty plea came at a time when public health officials were warning of a growing number of heroin-fentanyl deaths across the region.

It was with those other victims in mind that Runfola’s family spoke out Wednesday.

“We want to prevent this from happening to another family,” said Louis Sirianni Jr., one of Runfola’s brothers. “We are at a point in America now where almost every family is affected by this problem.”

It was just around the time of Runfola’s death that the presence of heroin mixed with fentanyl, already popular with addicts in Chicago and Philadelphia, came to the attention of law enforcement here.

When Runfola died, the federal Drug Enforcement Administration and Buffalo Police Department embarked on an investigation that traced the drugs he took back to Militello, who subsequently pleaded guilty to distributing heroin and fentanyl.

For Runfola’s family, the conviction provided some sense of justice.

“He was a big, wonderful person who had a personality you could fall in love with,” Anthony Sirianni said of his younger sibling. “Brother love. That was our word for it.”

When you sit and talk with Runfola’s family, you hear over and over again the stories of his larger-than-life personality and how he always “lit up the room” and had a joke to tell.

They will tell you that, yes, he was an addict but, yes, he also deserved a chance to get clean and live. “He didn’t want to die,” Ryan said of her brother. “He just wanted to cope.”

Militello, who also had family in the courtroom, has said in the past that he was aware of the fentanyl-laced heroin on the streets of Buffalo and that it was popular among heroin users.

He also claims that he never thought the heroin he sold to Runfola would kill him, and on Wednesday turned to Runfola’s family in court and repeated that claim.

“I’m always going to have to live with the guilt of knowing that I sold the dope that killed your brother,” he told them.

At that point, Anthony Sirianni stood up and turned his back to Militello.

Militello’s account of what happened that day in May 2013 – he claims he was trying to help ease Runfola’s withdrawal – also came under attack by Assistant U.S. Attorney Mary Catherine Baumgarten.

Baumgarten noted that when Militello sold the deadly heroin, Runfola had just finished a drug-treatment program two days earlier. She also reminded the judge of the impact of his death on his siblings.

Frank S. Falzone, Militello’s defense lawyer, argued for a shorter prison sentence and suggested that Militello’s rough childhood – he was shot when he was 15 – helps explain his drug-dealing past.

He also insisted that his client never sold drugs he knew were deadly.

“He did not know that heroin was laced with fentanyl," Falzone told Arcara. “He had no idea how lethal it was. To him, Robert Runfola was like a brother. He did not intend to kill him.”

“He was bragging about his stuff killing people,” said Anthony Sirianni.

For Runfola’s family, the message they want the public to remember is that their brother, like so many other addicts, was a good person who made bad decisions in order to cope with life’s setbacks.

They also want people to know that there are thousands like him out there and that the only answer to their addiction is more drug-treatment programs.

Ryan, who read a statement in court on behalf of her family, mentioned each of her siblings by name and how each one has suffered individually because of their brother’s death.

When she mentioned Louis Sirianni, who found Runfola on that day in 2013 and tried unsuccessfully to revive him, she paused, her voice cracking with emotion.

And finally, Ryan asked Arcara to remember how much they miss their brother, and that it’s a loss no family should have to endure.