On Sept. 22, a new addition was unveiled: a food truck, known as Ted's Truck, or "The Charcoal Chariot."

To me, part of the pleasure of Ted's is plowing through the food immediately upon receiving it -- it's not food you eat delicately. It's comfort food after a bad day (or to celebrate a good day), and there's no shame in a dab of mustard on your chin.

Plus, even the best charbroiled hot dogs shrivel as they cool, and a Sahlen's hot dog's skin loses its desirable crunch. Fries and onion rings don't stay warm for long and quickly lose their allure if they're cold. (Have you ever tried to reheat an onion ring? Brutal). There's not a moment to lose. So, if you have to choose between Ted's and another truck, consider when you'll eat the food. Ours depreciated considerably in the 10 minutes from receiving our orders to actually devouring the food. But, if you attack immediately, expect satisfaction.

Fortunately, silverware is not required -- you can eat Ted's standing up, sitting down or even stumbling about. (Probably not lying on your back, though).

The ordering procedure mimics that of the brick-and-mortar restaurants, as customers order at the right window, then enter a line at the left window to pay and select their toppings. The behemoth of a truck is 34 feet long, by far Buffalo's biggest mobile food vendor.

Look back at Andrew Galarneau's ode to Ted's in 2013, and you'll realize why this step is important:

"Then comes the moment when you express your Ted’s cred, by way of topping choices. Maybe you go for the regular, relying on the fixings applier to substitute Ted’s chili sauce for ketchup. Or maybe, based on the notion that you only go around once, you ask for the chili, cheese and onions. Plus fries, or an order of the shambolic onion rings, and a loganberry to complete the Ted’s trinity."

It takes a little getting used to, but a very active staff on the truck is helpful in making sure customers aren't confused. One useful change to suggest: List the toppings available to add to sausages, hot dogs and so forth. They're not apparent on the menu, and it would save the customer from asking, "Well, do you have ___ ?" Maybe, if I were a more loyal Ted's brick-and-mortar customer, I wouldn't have to ask.

Here's the rundown from our visit to the truck in late October:

Comments: The Italian sausage ($3.99) was the truck's best effort, in my opinion. The thick link was a pleasant combination of smoky and spicy, and the peppers and onions were laid on top generously. No shortage of flavor with this choice, and it was more filling than the footlong hot dog, believe it or not. 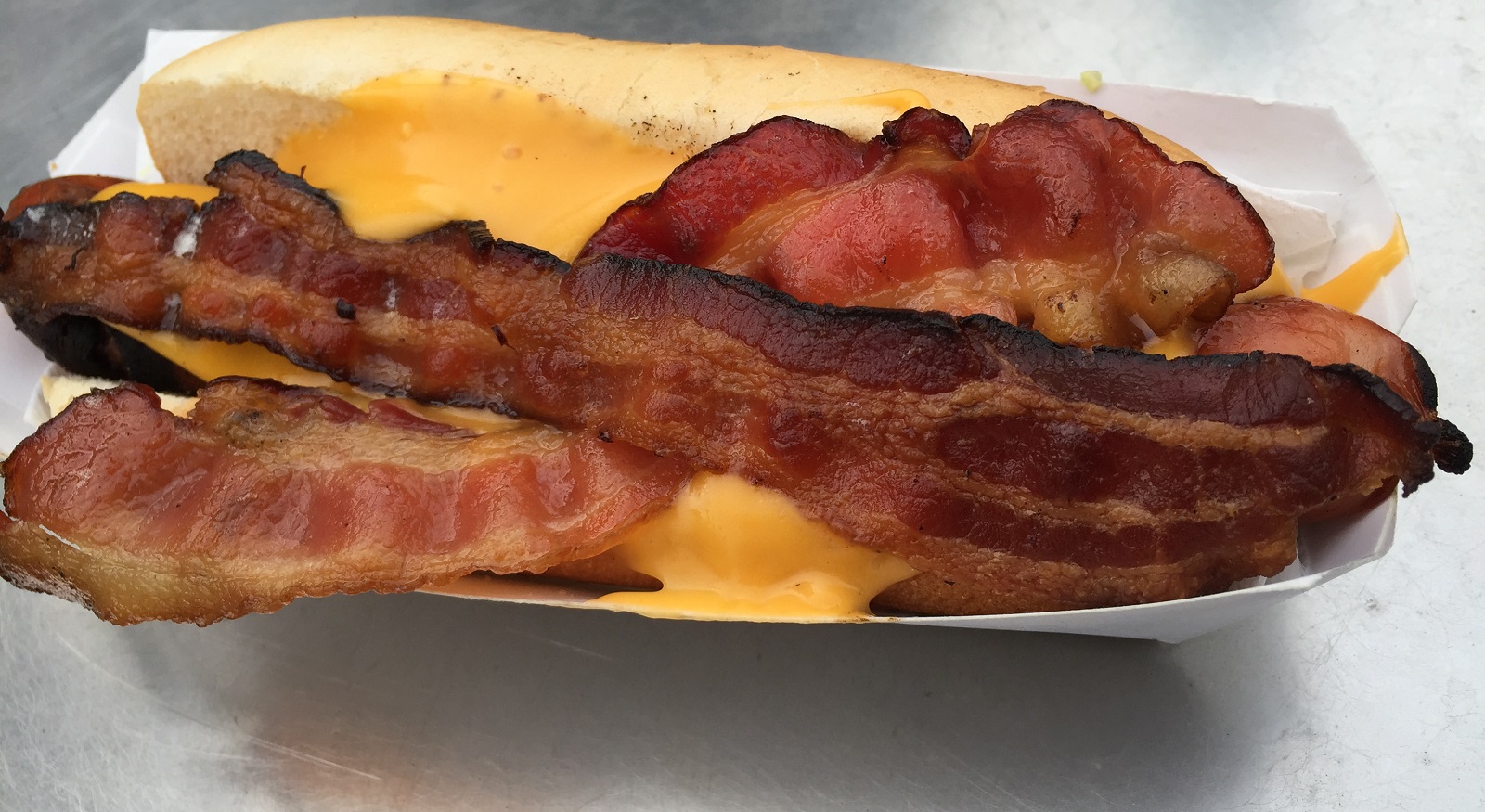 Comments: This absolutely delivered on its promise of bacon, albeit chewy instead of crispy, and cheese sauce, for $4.53. I ended up wishing the hot dog's skin was crisper, though, so next time I'd probably just hit the footlong with onions and mustard.

Comments: Let's be honest; the joy of a footlong Ted's hot dog ($3.89) is its sheer size -- even if it invites immature comments from friends or coworkers. Otherwise, it's little different than any other Ted's Hot Dog, except that it's $1.10 more and requires two hands for holding.

Commentary: This is the single cheeseburger ($3.74) from Ted's Truck, but there are options for a double ($5.34) or even triple ($7.34). It's a standard fast-food hamburger -- a little on the dry side -- and honestly, you're better off getting a hot dog, since that's Ted's calling card.

Comments: Ted's onion rings ($3.39) are scrumptious when they're fresh from the fryer -- we liked that they weren't overly battered -- but you MUST eat them fast. Sharing certainly helps the cause.

Comments: At my visit, I enjoyed the fries ($2.39) more than the rings, but that's probably because I waited to eat. My fault, Ted's.

The web page for the truck's schedule is cleverly named the "Charcoalocator," and it provides the weekly schedule for both lunch and dinner service. The truck doesn't stay in one city or town -- trips to Amherst, Cheektowaga, Williamsville and West Seneca accompany stops downtown.