Toutant would have been a hit anywhere. But when chef-owner James Roberts chose the address for the restaurant he’s been working on his entire adult life, he decided to roll dem bones at 437 Ellicott St.

City officials had chalked the building off for demolition. But Rocco Termini, Roberts’ landlord, took a hard look at his proposed tenant and spent until everything was new but the red bricks. Roberts spent even more outfitting the space. So far the gamble has come up cherries.

Since opening in May, Toutant has offered blue-collar favorites with a Southern accent, crafted with fine-dining quality but offered at mid-level prices. That’s how it has already carved its initials into the hearts of regulars, as delicious, gold-bond proof that things are looking up in Buffalo. 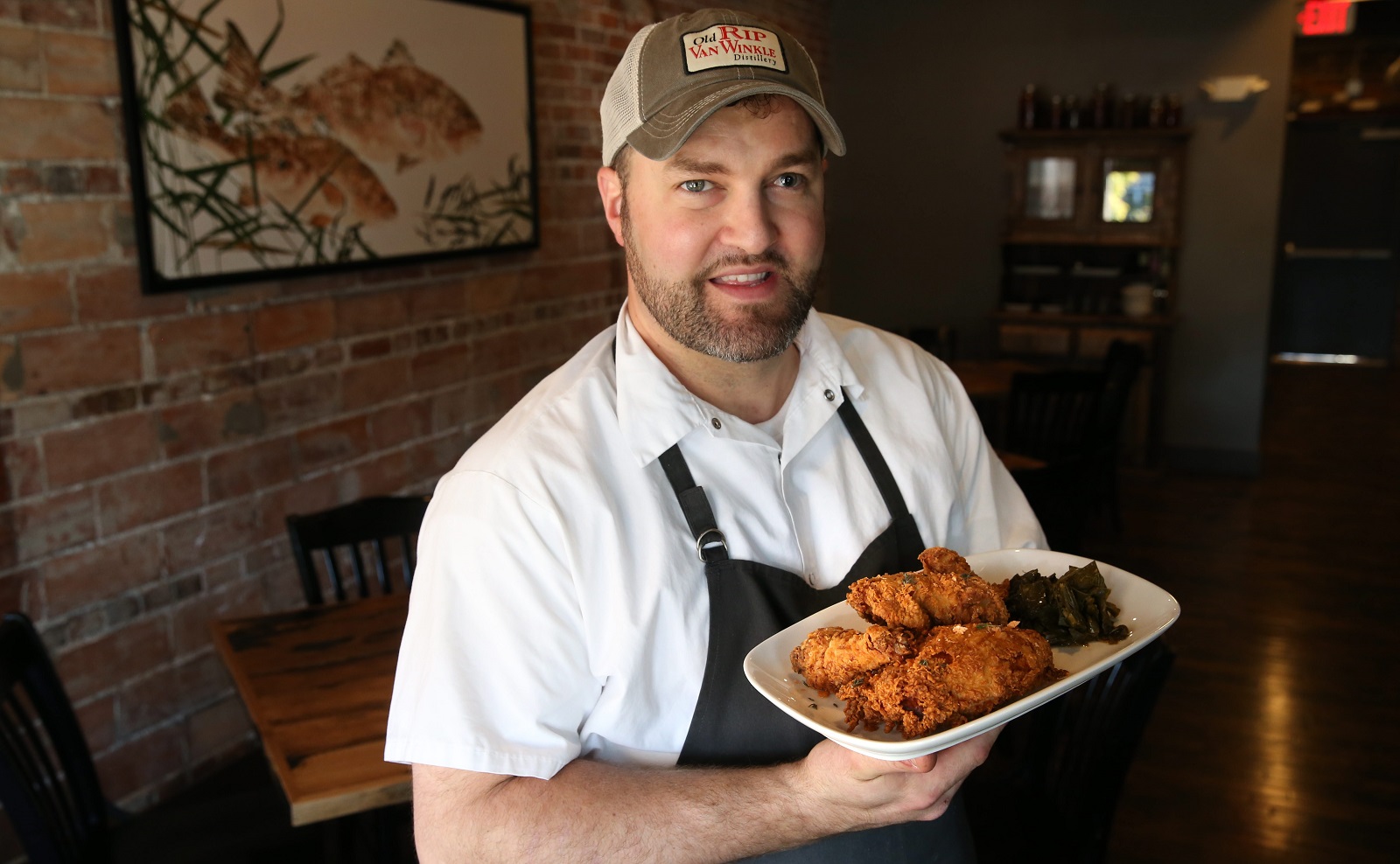 I was recognized at the door, and led upstairs to the third floor. Red-brick walls, exposed wood joists and tables of made of oak fenceposts from a Kentucky horse farm offer the ambiance of a refined country store, disturbed only by the odd errant blast of air conditioning. The three-level restaurant has no elevator and limited first-floor seating, so if you can’t climb, make that clear to the reservationist. A second-story balcony rewards some trekkers with views of the first-floor bar.

No matter where you sit, the food is worth the hike. Roberts, formerly Park Country Club’s executive chef, was born in Louisiana. He named Toutant after his great-grandfather’s fishing camp, two hours southeast of New Orleans by car and boat. It’s much more than a Cajun restaurant, though.

Cajuns aren’t known for their hush puppies. Toutant’s ($8) are definitive, bronze-crusted, fluffy doughnuts with souls of corn and nubs of smoked meat. 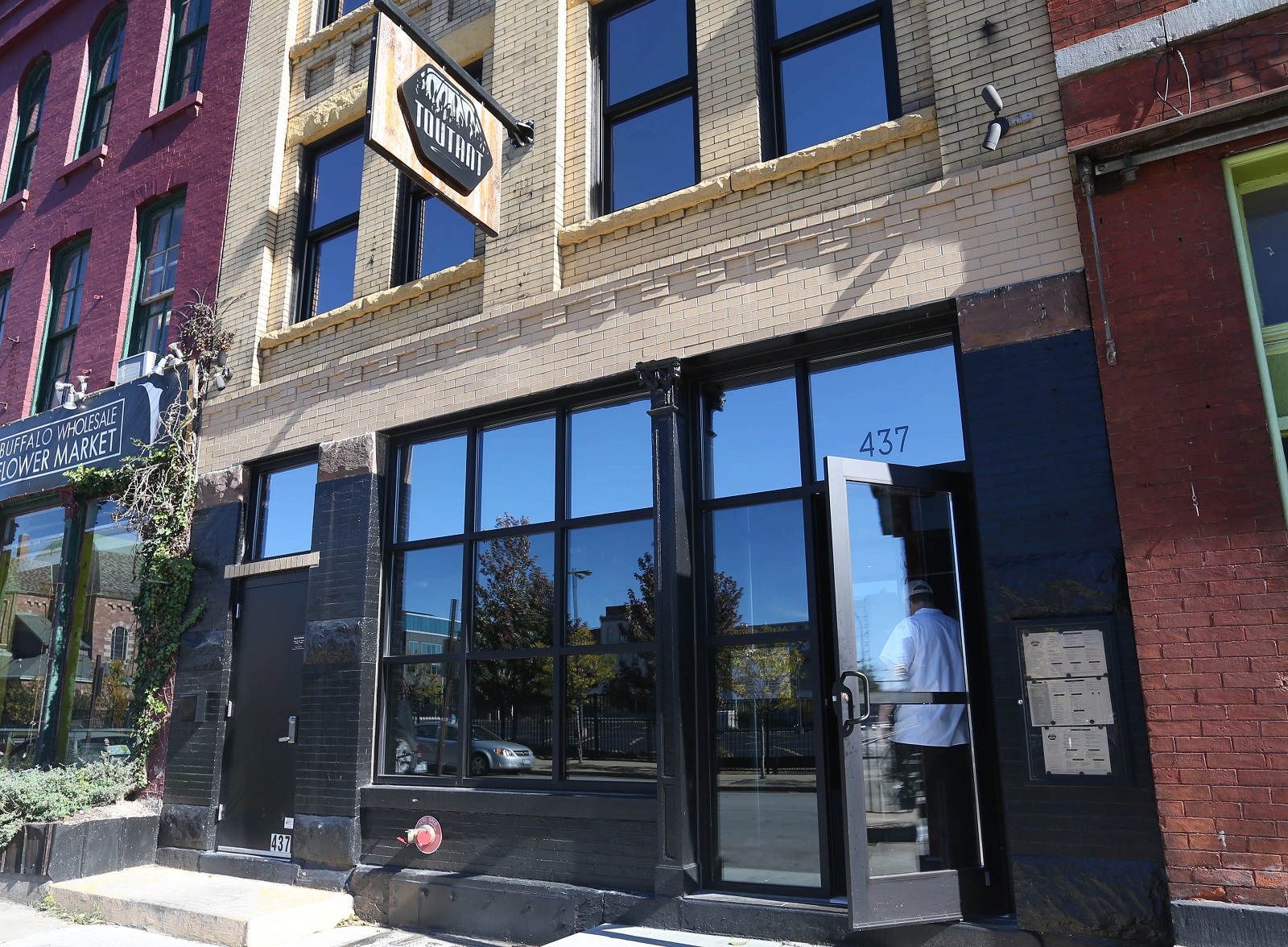 Toutant does barbecue of the week, too. My half-rack of pork ribs ($18) was sauced, but not too sweet. The meat was well-crusted but tender, with meat that came clean off the bone, even if it was a notch too chewy. Underneath were hearty pinto beans that deserved their own applause, smoked with pork belly and onions, and a square of sweet Texas-style cornbread kicked up with Hatch chiles.

Toutant’s featured cornbread is a Low Country version that’s only faintly sweet ($6). Baked to order, it arrives in a little cast-iron skillet with a pat of cultured butter melting into its bellybutton, edges caramelized against the cast iron, yet still moist. Even more remarkably, it tastes distinctly of corn.

That corn bread is one example of how stealthily sophisticated Roberts’ blue-collar dishes are. It’s built on a blend of three kinds of cornmeal, custom-ground for Roberts at Anson Mills in South Carolina and shipped fresh weekly. That mania for ingredients helps explain why sides at Toutant can hit as hard as most upscale casual entrees in Buffalo. Plus, gluten-free diners can feast on it, as with nearly half the menu, marked celiac-friendly. 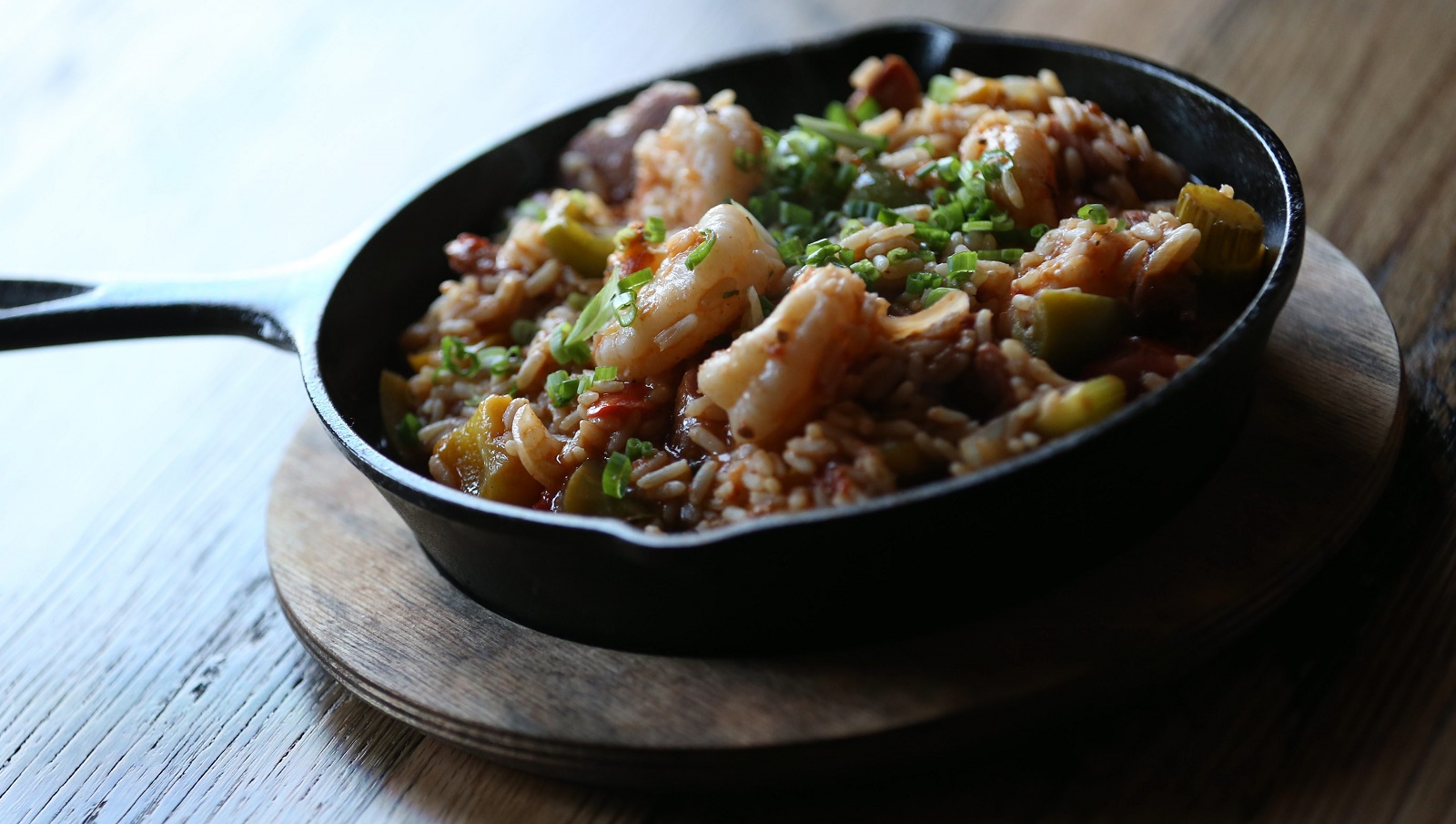 The most soulfully Cajun dish on the menu might be the grilled drum fish ($28), Robert’s homage to an apres-fishing dish his father fed him as a boy. A humble Gulf of Mexico fish is filleted and grilled with its skin on, keeping it moist and tight as it sears. Roberts adorns it with a breezy vinaigrette, wisps of citrus zest and Toutant’s canned tomatoes for the most satisfying piece of fish I’ve eaten this year.

The tomatoes are part of Toutant’s investment in preserving and curing the bounty of Western New York. From the Lockport-bred T-Meadow pork chop ($29) with pickled cherries to a sneakily refined squash side ($5), Toutant exploits the work of local farmers with a hybrid of modern and time-honored artisanal techniques, making it a flagship of the New-School Buffalo cuisine that has been giving diners another reason to be happy they live in Buffalo. 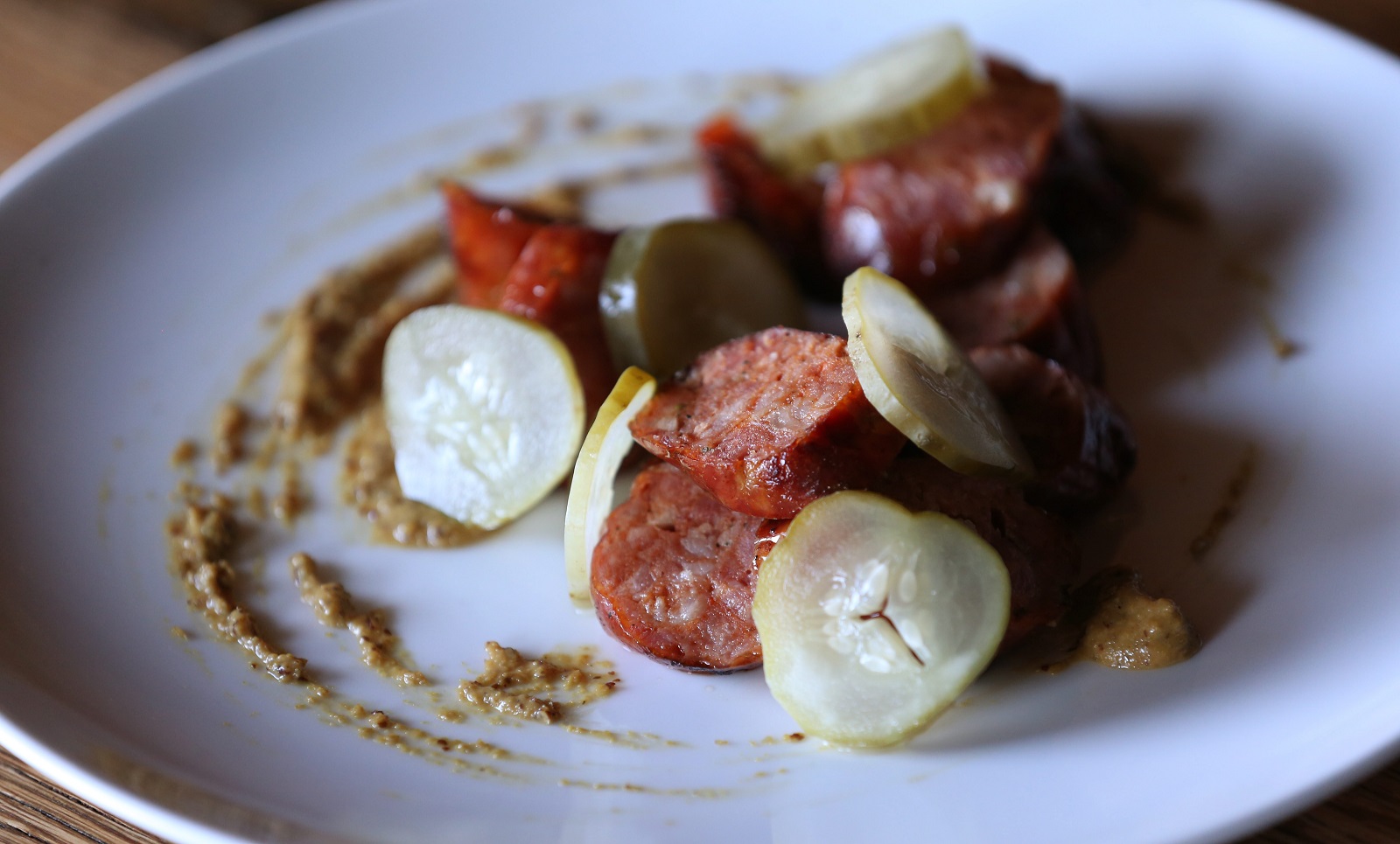 The Toutant kitchen, also led by chef de cuisine Joseph Fenush, gives Western New York farmers’ work a shot at the Grand Ole Opry. The heart of that squash dish was Oles Farm acorn squash cooked sous vide (wrapped to catch its juices and slow-cooked in a warm water bath) until tender. Then roasted till caramelized, tucked into a creamy concentrated squash puree, topped with thin slices of gently pickled delicata squash and little cubes of green freshness, compressed apple, which also had a ride in sous vide to intensify their flavor. For $5.

This week Roberts debuts his country ham, made from more of that T-Meadow pork. It’s smoked first, like American country ham, then aged for 19 months, like prosciutto. For $12, you can let paper-thin slices melt on your tongue, with housemade pickles. 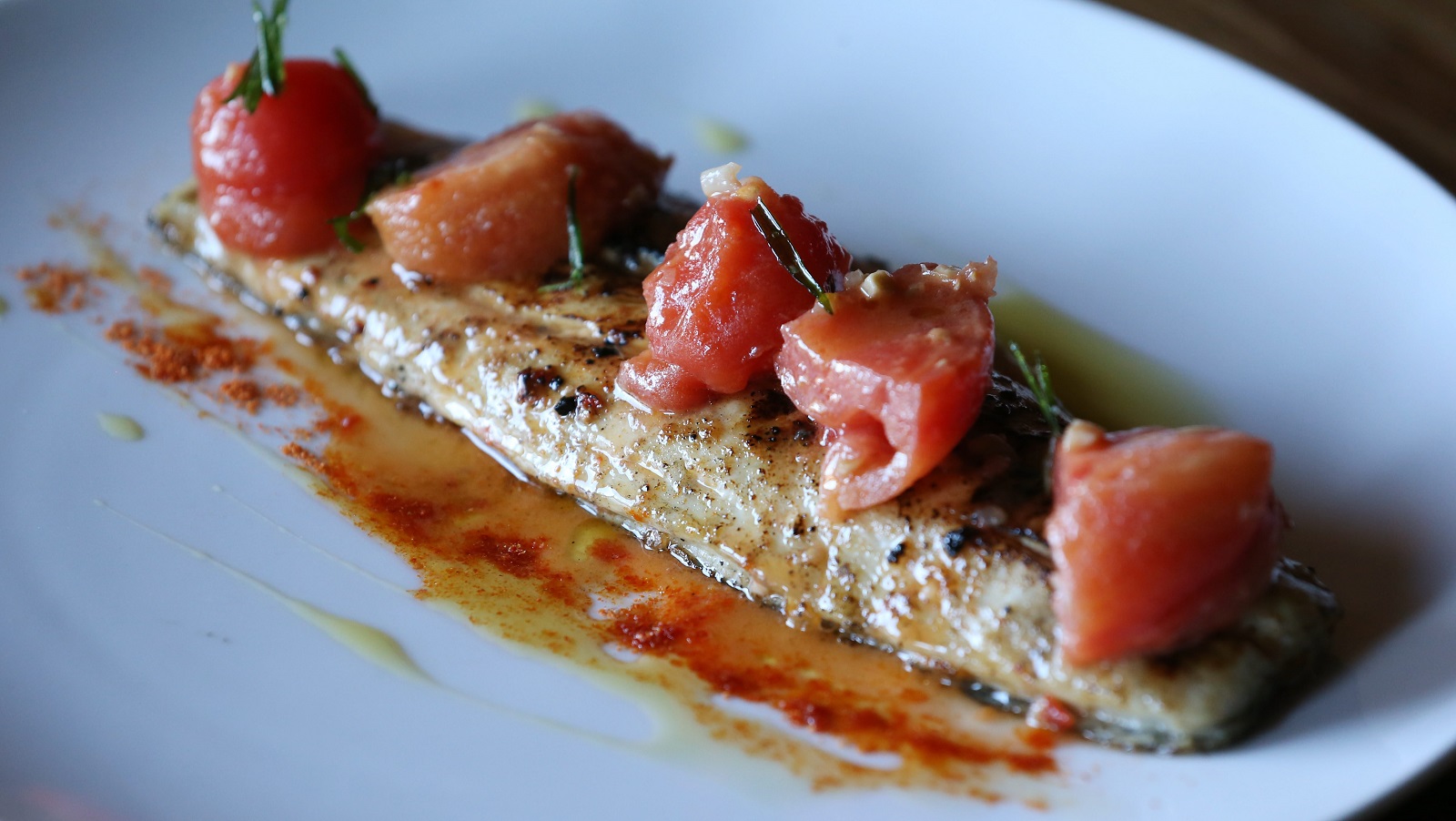 Toutant's wood-grilled Gulf red drum fish "on the half shell" is topped with a vinaigrette marinade and stewed preserved tomatoes. (Sharon Cantillon/Buffalo News)

Roberts has further widened his claim on Buffalo’s appetites by ruthlessly exploiting Buffalonian weaknesses with siren songs like his epic bologna sandwich. Two half-inch-thick slabs of housemade all-beef hickory-smoked bologna are grilled, then layered with onions caramelized in Genny Cream and American cheese. It’s served on a big buttermilk bun, which is housemade, like all of Toutant’s baked goods, and served with housemade pickles. It’s $10, but Roberts will serve it only after 11 p.m., at the bar. Like I said: ruthless. 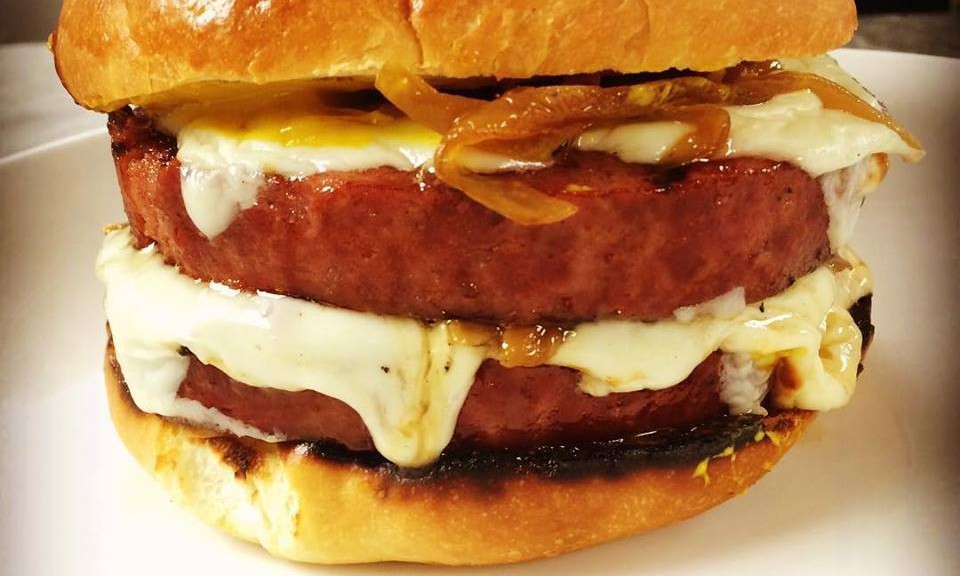 Console yourself with the first-class fried chicken ($19). A breast, thigh, drumstick and wing with smoky collard greens are juicy, crusty joy. (It doesn’t lose its charms cold for breakfast, either.)

Toutant’s muffaletta sandwich ($12 half), of cured meats, olive salad and cheese, is served warm on a garlic-buttered loaf, a distinct improvement over the cold Central Grocery version. (A half is enough for four to share.) 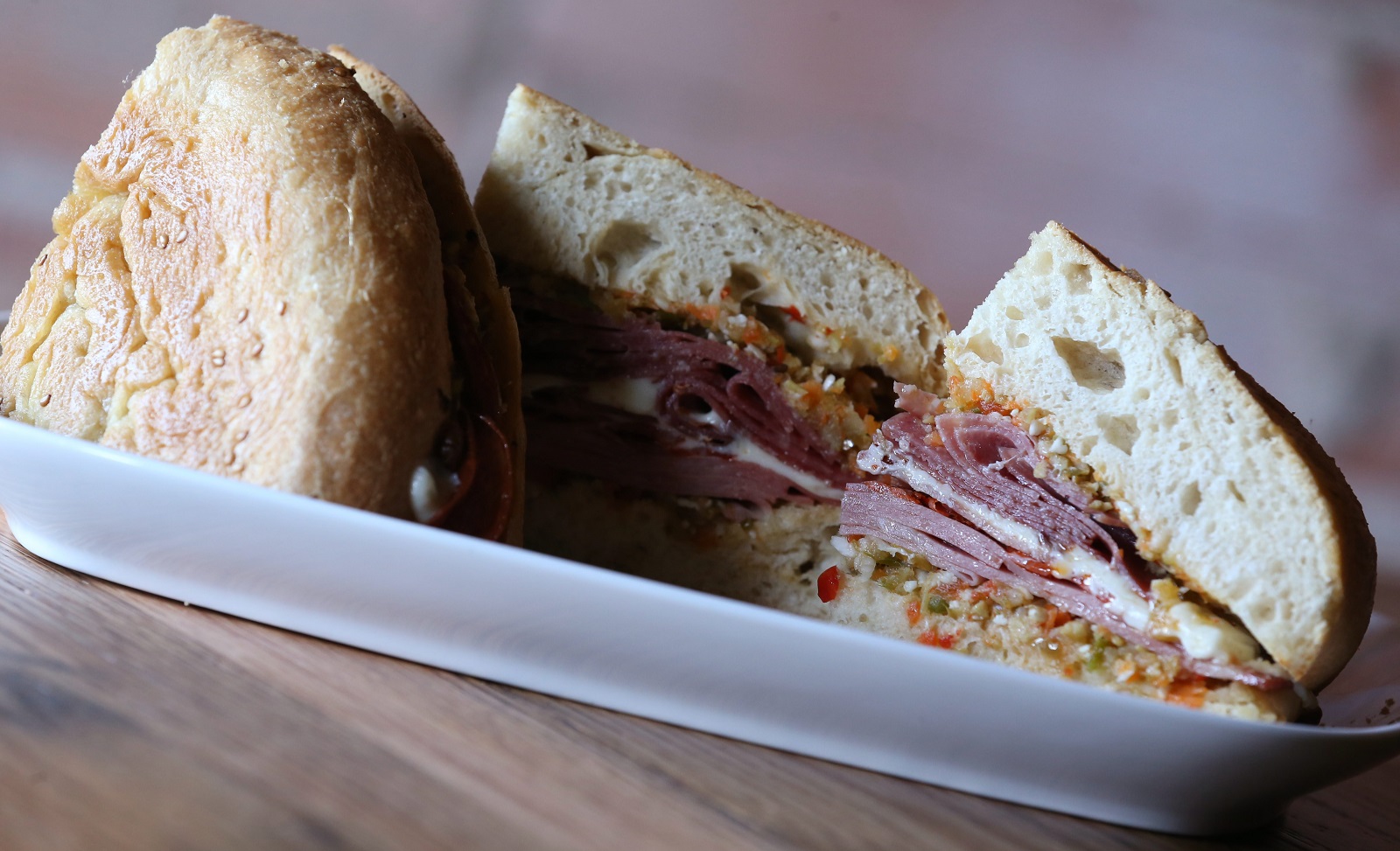 Yet no meat eater should miss Roberts’ andouille sausage ($9), smoked, seared and sliced, served with pickles.

Vegetable eaters might feel a neglected here, despite focused excellence like the squash side or a green salad with resonant Concord grape vinaigrette and pumpkin-seed granola ($8). I would note that the jambalaya, built on native Louisiana long-grain rice, comes vegetarian, as does worthy sweet potato pie ($5), listed as a side here, not dessert. 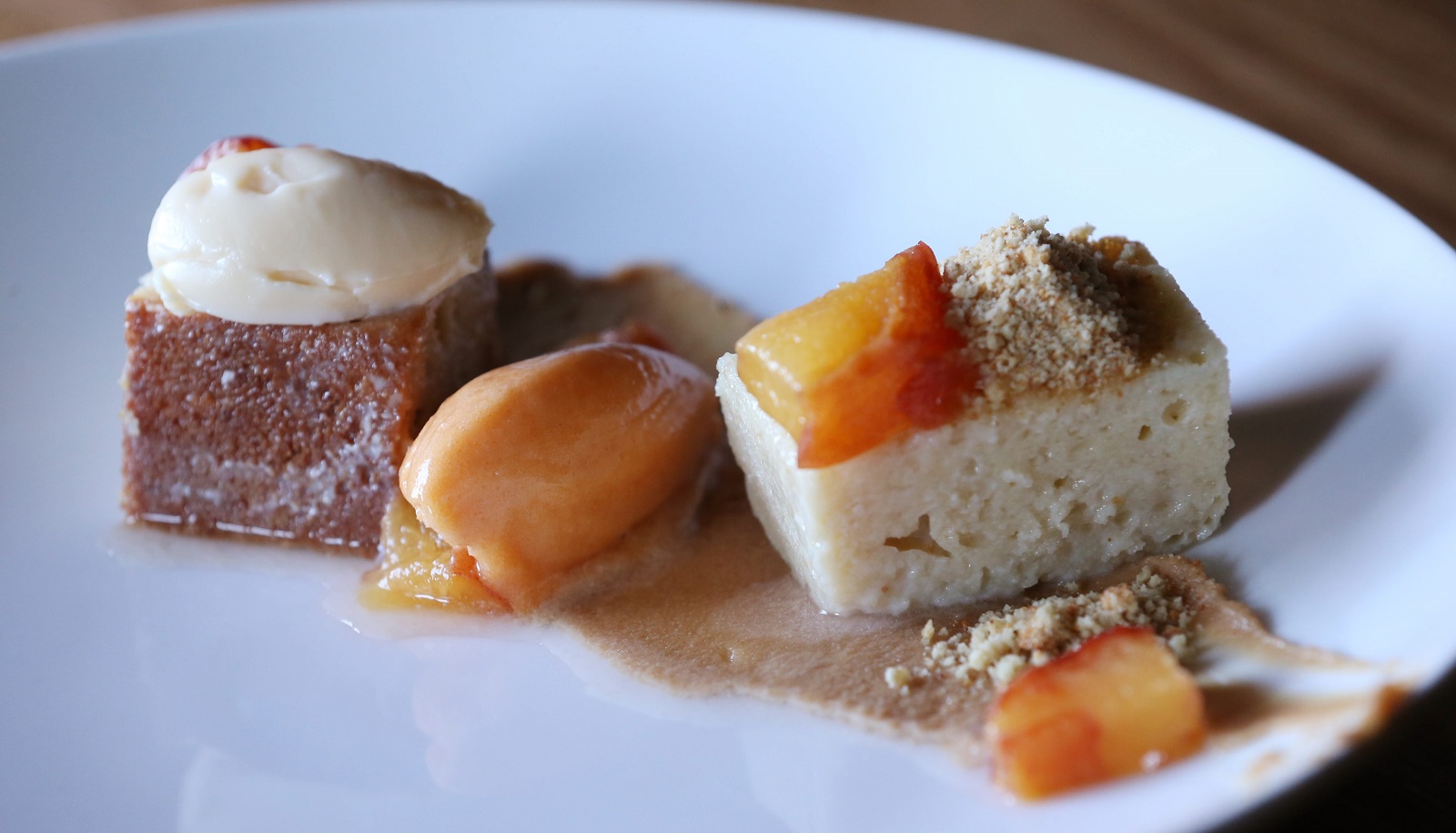 I haven’t even mentioned the drinks operation, which hits pleasure points on a scale from Hurricanes, frozen daiquiris and local craft brews to rare whiskey and a deft little wine list. Or the Sunday brunch, where you can watch the Bills game while you tackle country-fried steak ($14) and the city’s best waffle, made from batter cultured overnight ($10). 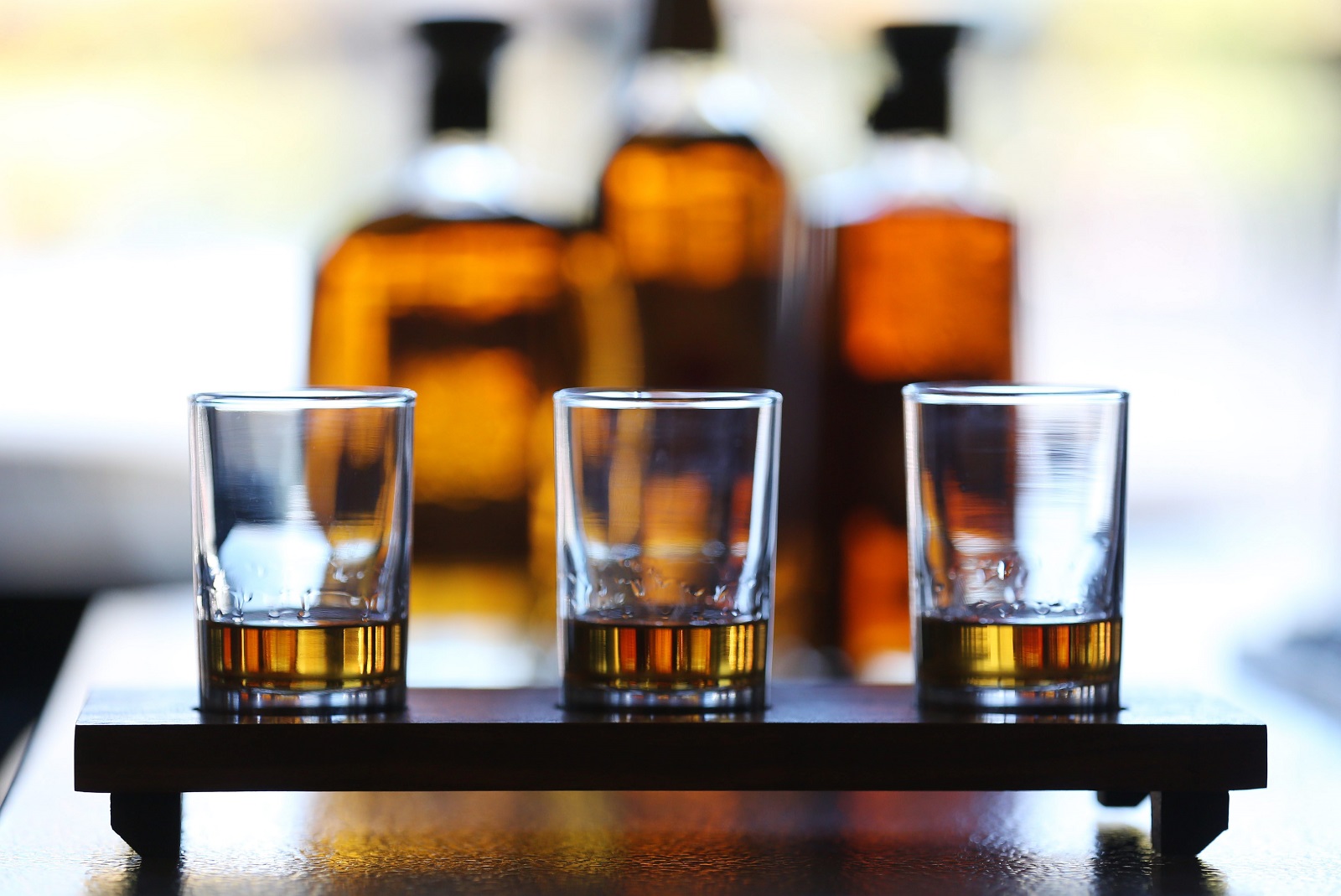 Only six months in, Toutant is already a restaurant every local should know, and no visitor should miss. Roberts and his team have raised the bar on what casual dining means this town, and they’re not done yet. Laissez le bon temps rouler, or in the local dialect: Let’s go, Buffalo.

PARKING: Street. But large $3 lot opens across the street at 4 p.m. on weekdays.

Send your restaurant tips to agalarneau@buffnews.com