Good luck game-planning against the University at Buffalo women's offense.

It's no secret that head coach Shawn Burke likes to isolate his wingers, Julia Benati and Carissima Cutrona, in order to carve apart defenses through the pair's pace and daring dribbling.

But forwards Kassidy Kidd and Celina Carrero are proving that foes cannot focus their attention on the flanks, as the Bulls' new strike tandem has combined for six goals and two assists in the last two matches, including Friday's 3-1 victory over Toledo (6-10, 2-5 MAC). UB improves to 8-5-2 overall and 4-2-1 against Mid-American Conference teams; the 13 points are good for second in the East Division.

Standings for the Mid-American Conference after the Oct. 16 matches.

Carrero's goal and an assist vs. the Rockets were both sublime; in the 11th minute, Benati collected a partial clearance just outside the 18-yard box and clipped the ball back in with the outside of her right foot. Even with the last defender, Carrero ran onto the well-weighted pass and flicked a header from a tough angle past Toledo freshman goalie Katie Wilson for the 1-0 lead.

Nursing a 2-1 advantage late, Carrero flashed her technical ability: Defender Brianna Shingary switched fields with a lofted long ball to the junior forward's chest, and Carrero brought it down smoothly, let it bounce once as she picked her head up, then volleyed a diagonal pass to Kidd, wide open to her left. Aware of how much time she had, Kidd settled the ball on her first touch and finished with finesse.

"The two of them together are going to be a handful for all these MAC teams," Burke said after the match.

"[Kassidy] is just absolutely beaming with confidence right now -- it's every little aspect of her game," the second-year UB head coach said. "Look at her last goal -- her composure, and, what a great finish. That's someone who's playing at the highest level.

"Maybe she knows that her games are limited being a senior -- this is it for her -- but she's making the most of it," he added. "She's playing at a different level right now. She's going to be in the conversation for MAC Player of the Year with how she's playing." 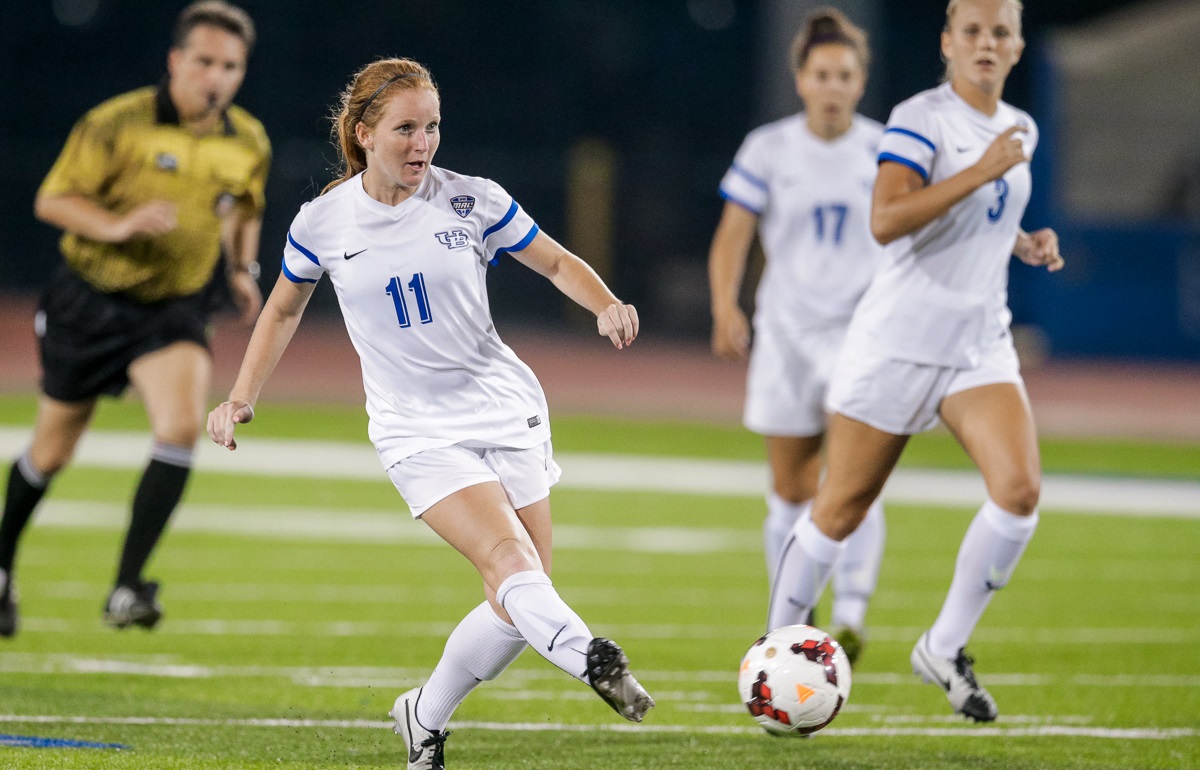 Kidd deflected the attention away from her, praising Celina Carrero's recent productivity before stressing the improvement of her team.

"[UB Stadium] is my favorite place in the world, so to be able to do well in front of our fans and to get another win, and for our team to keep getting better as we get close to November is all I can ask for tonight," said Kidd, who likely played her final regular season match under the lights in Amherst.

The well-spoken Kidd articulated why the Bulls are suddenly rolling as a unit.

"It was about finding grit," she explained, "and now we have that pep in our step and we're stepping to win those 50-50 balls that we didn't always get in the beginning of the year. As long as we keep our competitiveness up, our talent is going to shine through."

Unheralded Shingary: It's really easy to forget that Bulls defender Brianna Shingary is just a freshman, roughly two months into her college career. She may stand only 5'2, but the Medina, Ohio native tackles with ferocity and eagerly gets forward to join the Bulls' front five.

Despite the quicker pace of women's Division I soccer, the Bulls' No. 21 almost always makes the right decision between a short pass to a teammate's feet, an early switch of fields or a smart clearance.

"Every single moment she plays -- you'd think the kid plays like she's told she never gets to play again," Burke says of his first-year left back. "She lays her body on the line and I think her teammates feed off of it. She's an integral part of this, and she lost that freshman tag a long time ago."

What's next?: The Bulls play their final regular season home game at noon Sunday vs. Central Michigan (5-7-2, 4-2-1 MAC). The Chippewas haven't conceded a goal in their last 279 minutes and are riding a three-game unbeaten streak in conference play. Slowing down the Bulls attack when it's humming like this will still be a tall task for Central, which starts four freshmen.

Email Ben Tsujimoto, who sometimes he wishes he had an alliterative name, at btsujimoto@buffnews.com