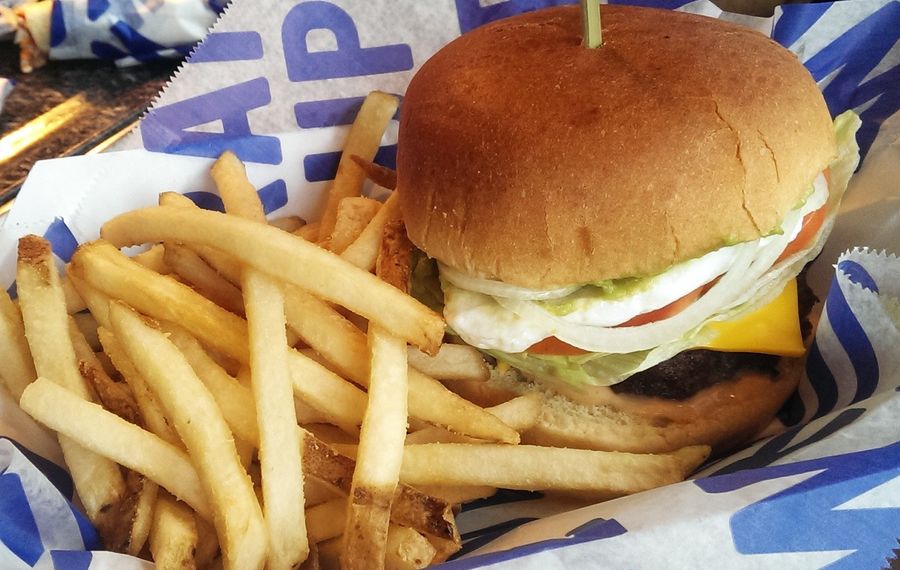 Jack Eichel got a burger named after him before he officially made the Buffalo Sabres opening night roster.

Eichel’s “Eich Daddy” was the highlight of a slew of new menu items shown off by Delaware North Sportservice on Tuesday at First Niagara Center. The concessions company hopes the burger, designed by the Sabres’ first round pick in June’s NHL Draft, will be as popular in concession lines as the Boston University standout is expected to be in the stands.

The cross-section of the Eich Daddy, the burger named after prized Sabres draft pick Jack Eichel. (Ryan Nagelhout/Special to The News)

The burger modifies the classic combo of all-beef patty, American cheese, lettuce, onion and tomato by throwing on Thousand Island dressing, guacamole and a fried egg. Sitting on a brioche roll, the burger is one of the bolder taste options in the corrugated cardboard-bound world of stadium eats.

Eichel wasn’t on hand to chow down like Jerry Hughes did when announcing his chicken-and-waffle sandwich last month, but Delaware North said the rookie forward played a direct role in designing the burger.

Basically, if you don’t eat it, Jack Eichel won’t be your friend.

The burger itself is interesting. Putting egg on a meat patty is a popular trend these days, but chefs opted to fry the egg over hard instead of over easy. That makes it less messy and likely easier to prepare, but does give it more of a fast food vibe (think more Egg McMuffin than eggs and toast). The bottom bun of the brioche roll was a bit hard on the sample we were given, but I suspect the warming plate it was sitting on during the presentation was to blame there.

The step-by-step instructions for making the Eich Daddy. (Ryan Nagelhout/Special to The News)

The avocado gave the burger some good texture and the Thousand Island dressing was strategically placed under the burger to let the flavors work on their own for a bit. It’s not my favorite burger in Buffalo, but it’s a fine stand-in if you don’t have time for dinner elsewhere before you’re trapped in a windowless concrete enclosure with 18,000 other hockey fans for three hours on a cold winter’s night.

It is important to note there was some discrepancy when it came to the name of the actual burger. The official release given to media spelled it the “EIKE Daddy,” while the “how to assemble” placard clearly read “EICH Daddy.”

No one from Delaware North was willing to declare a proper spelling of the menu item, but a spokesperson promised that “no matter what you’re going to… 'Eich' it.”

Personally, I’m not sure why they needed to throw parentage into this in the first place. Why not name it the Eichelburger and just call it a day? Hopefully it's what the starving masses will be shouting for over the crowd during intermissions anyway.

Sample-size cuts of the Eich Daddy for the media. (Ryan Nagelhout/Special to The News)

NEW TO THE STANDS

Poutine — Delaware North described this with one word in its release: “traditional.” Well, mission accomplished. It seems like poutine is often lost in translation across the US/Canadian border. You know what I’m talking about here: bad (American) cheese, limp fries and weak gravy plague the American poutine scene. But DNC was faithful with this. A good portion of fries, gravy and cheese curds. They did it.

The poutine from the Sabres concessions will be available to the general public attending Sabres games. (Ryan Nagelhout/Special to The News)

Greek Pita Wrap — I suppose this could also be called “traditional.” It’s chicken wrapped up with feta cheese, lettuce, tomato, and onion and topped tzatziki sauce. The end game is serviceable, but it was odd to me that the pita itself stood out in this one, as the tzatziki tasted a bit muted. It’s a faithful recreation, though. Nothing crazy hidden inside here.

The Greek wrap will be available as part of the general Sabres concessions. (Ryan Nagelhout/Special to The News)

Street Taco Trio — Three chances for glory here with chicken, beef, or pork tacos. Each dish comes with two tacos served with nacho chips and cheese sauce, so choose wisely. My pick here is the pork tacos, which had more flavor and a lot more texture than the other two.

The chicken tacos were exactly what you’d expect. Again, cooking for a few thousand people usually means toned down flavors and a wide appeal, so you might want to sneak in your own hot sauce if you’re looking for some more fire.

The beef tacos sort of looked like a Taco Bell soft shell number, but the sauce had a bit more going on than I expected. Still, a distant third to the pork and chicken. Also, I suspect many people will get confused by the wording of this dish. It’s a trio that gives you two tacos. Lots of questions left to answer there.

The Street Taco Trio is another of the new Sabres concessions. (Ryan Nagelhout/Special to The News)

The higher price point seats have new menu options as well. First Niagara gets its own chicken-and-waffle sandwich with its own twist: loganberry syrup. It’s topped with coleslaw and cheddar cheese and served with fries. I was honestly thrown a bit by the loganberry, but conceptually it’s an interesting idea. It’s a chicken-and-waffle world, man. I’m just living in it.

Chicken and waffles are covered in loganberry syrup. (Ryan Nagelhout/Special to The News)

The Harbor Club gets its own taco trio, but with the premium seating comes premium ingredients: smoked pork belly, braised beef and chili-lime shrimp. The chefs on hand mentioned the influence of food trucks on their menu this year, so these should look pretty familiar to taco truck enthusiasts.

One standout on the menu, though, is the beef on weck mac and cheese. Hear me out now: it’s a bit weird to have shells and cheese underneath beef, horseradish, cheddar cheese, and caraway seeds. But it’s an interesting mix. I was skeptical when ordering beef on weck sushi at Seabar, too. But it worked out. The lesson here is that we should add beef on weck to more dishes.

Beef on weck macaroni and cheese was a success, according to our reviewer. (Ryan Nagelhout/Special to The News)

Delaware North decided to bring a new approach to the fancy seats this season, focusing on “shared plates” and adding a bit more complexity to their menu. That includes the healthier option of a granola bar (with two granola flavors!).

The Buffalo Cheese Steak is the highlight here. It’s great—ribeye topped with onions, bleu cheese, and hot sauce on small hoagie rolls. This is a stinger that’s missing the chicken, but the rib-eye more than makes up for it.

New options from the Lexus Club include fried bologna sliders, right. (Ryan Nagelhout/Special to The News)

AT THE LEXUS CLUB

If you can afford it, check out the poached pear harvest salad or seared scallops, which were great. The meatballs were also tasty, served with ricotta cheese and fried basil. Sadly I neglected to try the Tennessee hot chicken here, missing a once-in-a-lifetime opportunity for a working writer with student loans.

The Sabres also announced partnerships with beer companies Flying Bison and Southern Tier as well as an agreement with pizzeria La Nova. Southern Tier’s One Buffalo beer was on hand, which I gave a brief review in the Bills food post linked above. Fancier booze will be available in the suites, of course, and Coca Cola soft drinks and Dasani water remain the norm at First Niagara concessions.

A lineup of new drink options for the coming Sabres season. (Ryan Nagelhout/Special to The News)