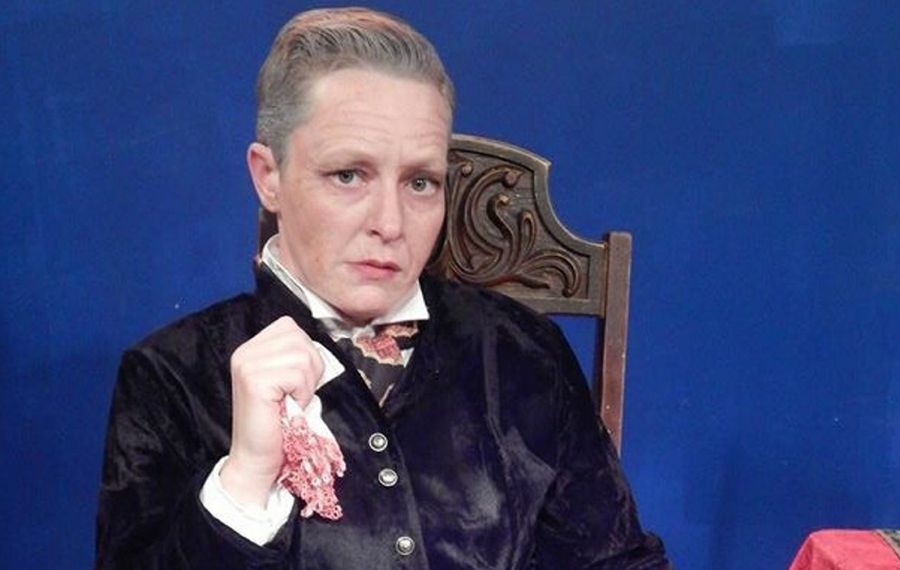 Charlotte Cushman, Boston-born, opera-trained as a natural contralto, later evolved into one of America’s greatest actresses of the 19th century – playing males and females – and one of the young nation’s first stage “stars.”

She was always on tour, and her audiences often included President Lincoln and his “team of rivals” including Secretary of State William Seward.

A decade before she died, in 1876, a poster touting her title role in “Hamlet” crowned her “a lady universally acknowledged as the greatest living tragic actress.” Most people agreed.

The New York Herald Tribune’s William Winter wrote a lofty eulogy at her death, memorializing her voice as “soft or silvery or deep or mellow,” capable of tremble or break or even “pathetic beyond description.”

And it is that fiery soul that playwright Carolyn Gage and Brazen-Faced Varlets have reincarnated in the postage stamp-sized back room of the transplanted Rust Belt Books on Buffalo’s West Side in “The Last Reading of Charlotte Cushman.”

The Varlet sisters have found gold in the plays of the prolific Gage, whose “The Anastasia Trials in the Court of Women” was a Varlet stunner in 2014.

Lara D. Haberberger, who directed “Anastasia,” does the same for “Charlotte” and is blessed to have Heather Fangsrud, a co-founder of the Varlet company and a recent hiatus returnee from, as program notes indicate, “the left coast,” in the title role here. Karma.

Something else distinguished Cushman over her illustrious theater career, both in America and abroad. She was an out-of-the-closet lesbian, already a veteran of “breeches” or cross-dressing “walk-on” roles in the 1830s – she was tall, muscular, imposing – until an adventurous director suggested that she read for the monster part of Lady Macbeth at the ripe old age of 19. She was sensational.

Major women’s roles in nearly all of the Shakespearean canon followed over four decades, including Queen Oberon in “A Midsummer Night’s Dream,” Katherine of Aragon in “Henry VIII,” Prospero in “The Tempest” as well as the downtrodden, doomed Dickensian harlot, Nancy Sikes.

Charlotte and her younger sister, Susan, paired for “Romeo & Juliet” with Charlotte playing Romeo. It was an international success.

But, as we learn in this “The Last Reading of Charlotte Cushman,” theater historians probably mention her most for her witchy, wild-eyed portrait of Meg Merrilies, a Gypsy seer, in Sir Walter Scott’s “Guy Mannering.” “A potboiler,” said Charlotte, who never understood the fame the role brought her.

“Last Reading” is so titled because the Charlotte depicted is tired and very ill with breast cancer, in and out of retirement, scheduling “literary readings” mostly, her magical voice diminished. The play delves into all of this and spends much time chronicling her tumultuous expatriate days in Italy with her sister, various artists and writers, lesbian alliances galore, mix-and-match affairs, scandalous offstage goings-on.

Charlotte, between acting out snippets of her famous roles, alternately grimaces and chuckles at the catty remembrances, of which there are, perhaps, too many. It’s the only time that Carolyn Gage’s lively script lags.

Actress Fangsrud presents a severe, mercurial, iron-willed, even sweet Charlotte. We quickly see why in this hourlong snapshot – she had to be both coveted and feared as a resolute 19th century woman of note and American grit.

There were some slips of dialogue and rhythm loss at opening performance, but these shall pass. As performances continue, these could be, should be, an extraordinary 60 minutes.

Gage says that her plays are written to “reclaim” famous lesbians in history. Director Haberberger has seen to that again. Intriguing work once more by the Varlets.

“The Last Reading of Charlotte Cushman.” A one-act, one-woman show presented by Brazen-Faced Varlets at Rust Belt Books, 415 Grant St. Performances are at 2 p.m. Saturdays and Sundays through Oct. 18. For info, call 574-9139 or visit varlets.org. Note: There is street parking only on Grant with limited seating (25-30) at Rust Belt Books. Tickets are $15 at the door.