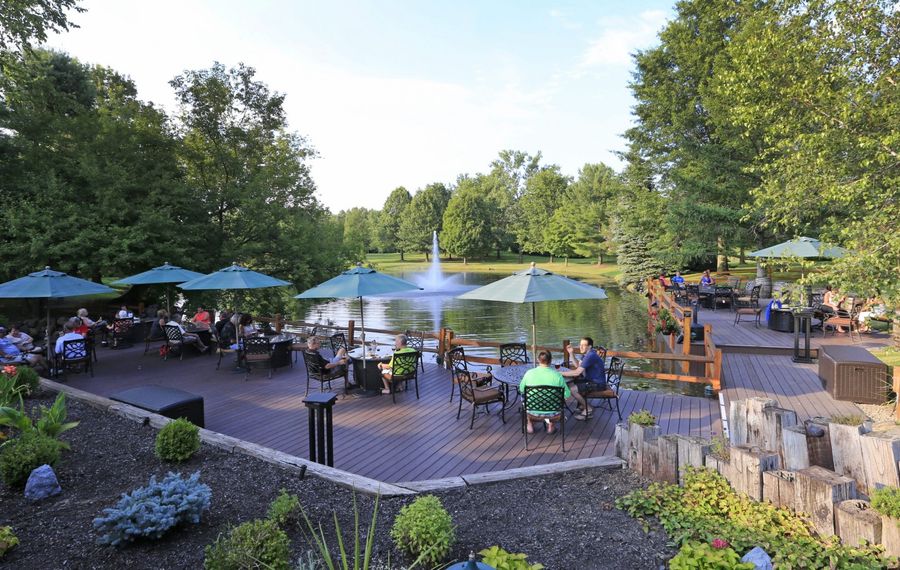 Later generations of successful families often are expected to carry on the business. In the case of the Russo family (of Sorrento Cheese fame), the next generation took a detour into making beer – really good beer – that’s served in a variety of establishments throughout Western New York.

Father John Russo and son John Jr. opened Hamburg Brewing in 2013, with a taproom and onsite brewing operation. They now even grow some of their own hops.

The taproom is gorgeous, with a vaulted wood ceiling and a giant, double-sided fireplace in the center of the structure giving it chalet-esque feel. It’s a great vibe during the winter, but during summer the patio is the place to be.

Running the entire length of the building, the patio features two levels with umbrella tables and chairs. Four special tables feature a built-in fire pit that can be opened and lit upon request. The beautiful patio overlooks perfectly manicured landscaping and a lovely pond with a fountain. The setting is so stunning, one expects a Frontgate magazine photographer to pop out of the bushes and start snapping pictures at any moment.

Ten taps are reserved for HBC beers and there is one “guest tap.” The menu does a nice job of explaining the beers – which include year-round, seasonal and limited edition beers – along with each one’s “hoppiness.”

HBC doesn’t shy away from interesting collaborations with other breweries either, like its 219 Series with Ellicottville Brewing. The Jasmine IPA is brewed with green tea, jasmine flower and a new lemondrop hop variety.

A limited but solid snack menu keeps the hungry at bay. There is a charcuterie board with cheese and meat, but we want to see a beer and cheese soup, if only to pay homage to the family’s past and future.

Until then, we’ll sip our suds under the trees of the brewery’s backyard.

Scene: Kick back and relax. Is there a better way to while away the day than at a local brewery?

Patio: Paradise-like patio setting with a view of a large pond. Covered area lets you enjoy the outdoors even on a rainy day. Special smoking patio nearby. Heaters for chilly weather.

Dress: Casual, but not your hedge-trimming attire.

Bar: Beers range in price from $5 to $7. Flights of beer (5 oz. each) $8. Growlers available for purchase/off site consumption.

Extra: Live music Wednesdays/Saturdays. Brewery tours ($15) Saturday and Sunday on the hour, 1-5 p.m. Call if you have a large group. TVs indoors tuned to sports. Model replica of the Hamburg-Colorado Railroad – one of Western New York’s largest model train sets with more than 800 feet of track – is on site.