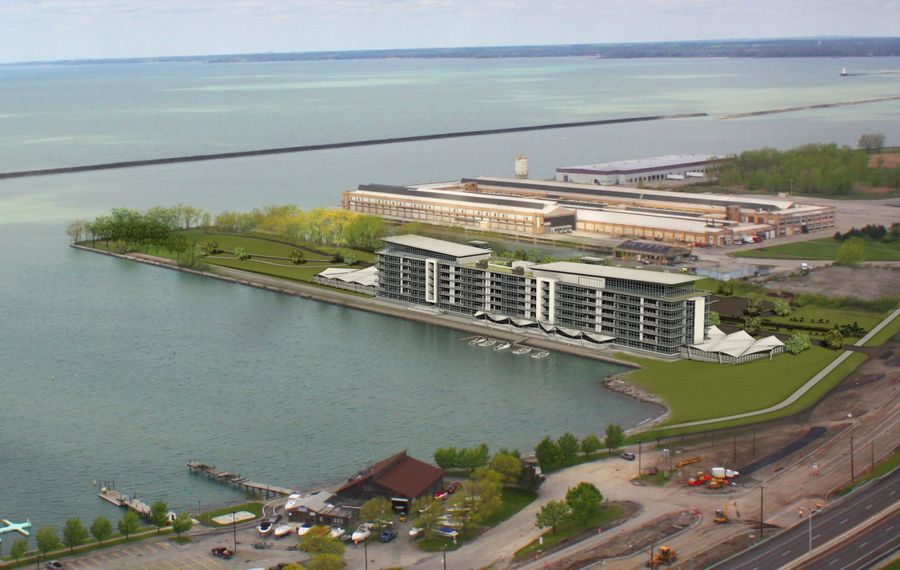 The long-vacant former Freezer Queen building on Buffalo’s Outer Harbor may finally get a new future after years of vacancy and failed hopes.

Plans call for 120 luxury apartments, each facing and overlooking the water toward the Small Boat Harbor, with patios, fireplaces and a host of upscale finishes, Buchheit said. The units would also have strong energy-efficient insulation, because of the harsh environment on Lake Erie, as well as covered parking for residents.

The complex will also feature an athletic facility for tenants, two first-floor restaurants, a small delicatessen and a dock for boaters who want to come to the restaurants. Buchheit is currently talking with “a couple of restaurateurs who are very interested in working with us on this,” but “we don’t have anything concrete.”

He also plans to add a seventh floor to the six-story building, creating a penthouse level with three to five units, bringing the total size of the facility to about 300,000 square feet. Rents for those apartments have not yet been determined.

“It’s another step forward for the waterfront,” said Brendan R. Mehaffy, executive director of the city’s Office of Strategic Planning, who was aware of the project in advance. “It’s good to see a redevelopment proposal for the Freezer Queen.”

Buchheit is partnering with Melissa G. Baumgart, founder and president of construction firm R&P Oak Hill Development, on the ambitious project. It is estimated to cost between $40 million and $60 million, “depending on how high-end we go and what the market will bear for the quality,” he said.

Financing details are still being determined, Buchheit said, but he plans to explore any possible tax incentives or other benefits through the Erie County Industrial Development Agency or other sources “to try to get the cost in range.”

Buchheit and Baumgart expect to use the existing building, but strip the outer shell. The project would require rezoning, demolition permits and site plan approval from the Buffalo Planning Board. Buchheit and Baumgart are still working through the planning stages with architects at Trautman & Associates, so they have not yet filed any paperwork with city officials.

If approved, any necessary demolition work would begin on the superstructure this fall, with construction starting in spring 2016. The project is expected to be completed and opened by spring 2017.

“It’s an ambitious schedule, but we’d like to see it happen,” Hoyt said. “I think it’s further evidence of the great momentum we’re making on Buffalo’s waterfront.”

Built in 1927, the 272,160-square-foot building at 975 Fuhrmann Blvd., near the intersection with Ohio Street, has been vacant since July 2006, when the factory was shut down by its Massachusetts-based corporate owner after federal food safety inspectors found unsanitary conditions, including cockroach infestations. Freezer Queen had been started in 1958 by businessman Paul L. Snyder but was sold to Nabisco in 1970 and underwent several other changes of ownership before its demise.

Buchheit, a real estate investor and owner of Orchard Park-based highway marking firm Accent Stripe, bought the 20-acre peninsula-shaped Freezer Queen site in 2007 for $3 million, anticipating new opportunities for waterfront development. But despite several concepts, including one that was proposed right before the national financial crisis and recession, nothing materialized.

Buchheit hopes to eventually develop the outer part of the peninsula, with potentially a banquet facility at the end of the pier and possibly new condominiums. A hotel is a possibility, but “there’s so darn many hotels going up in the area, we’re not sure if the market can support it,” he said.

“This is a different economy in Buffalo at this time,” Mehaffy said. “So the numbers are more in his favor at this point, and any developer’s favor. It’s certainly a different time.”

Besides the growth of Canalside, Erie Canal Harbor Development Corp. is working to redevelop about 200 acres of Outer Harbor land that the agency took over from the Niagara Frontier Transportation Authority. Already, a new state park and beach have been created, a Tennessee firm is investing $10 million to operate and upgrade the Small Boat Harbor, and officials are seeking a broader plan for the rest of the land that will likely include significant recreational and open space.

The project also “builds off the significant investment” in streetscape and infrastructure that the city and other agencies have made along Ohio Street and Furhmann Boulevard, Mehaffy noted. And housing is already becoming part of the mix. Just up nearby Ohio Street, for example, Savarino Companies and Ellicott Development are each pursuing separate housing projects along the Buffalo River.

“There’s an interest in and a demand for housing on Buffalo’s waterfront, and clearly this developer agrees,” Hoyt said. “These units will be phenomenal. I might not be able to afford it, but there will be people out there who will be eager to put a deposit down.”