Cramming’s not just for final exams and the back seat of your Ford hatchback.

With summer approaching its halfway point, activities need to be stuffed into your iPhone calendar. For those looking to pack the equivalent of four alt-rock concerts into one waterfront-set date, there’s Alternative Buffalo’s all-day Kerfuffle, scheduled to kick off at 1:45 p.m. Saturday within the cobblestone-laden confines of Canalside.

Now in its second year, the sold-out festival will feature the season’s most eclectic lineup, with industry neophytes (In the Valley Below) manning the same stage as 20-year groove vets (Cake). And if you were lucky enough to score some of the summer’s most sought-after tickets, here’s a preview of what’s on tap:

Headlining the day will be Sacramento’s most infectious five, as apt to lure listeners via bass drum beat into a tune named “Frank Sinatra” as to team low-tone electric riffs and trumpets on a cover of Gloria Gaynor’s “I Will Survive.” Yes, the John McCrea-led quintet has only released two studio albums over the last dozen years (with 2011’s “Showroom of Compassion” its latest), but old material jammed out under the Skyway should still cap the day’s delirium with an emphatic and bass-backed exclamation point.

Since finding its name from a Don DeLillo novel and success from the second-person narrative of college radio smash, “Sometime Around Midnight,” the Mikel Jolet-conceived outfit has outperformed any one-hit-wonder expectations.

With three well-received albums since its self-titled debut – and enough extra material to release the acoustic “Songs of God and Whiskey” right after February’s “Dope Machines” – TATE’s exhibited staying power via varied and vivacious pop rock arrangements. Also, good news: If you like the band Saturday, catch another performance Sept. 22 in Town Ballroom.

Cold War Kids are one of the popular bands on 107.7 FM Alternative Buffalo, and they'll also play a set at Kerfuffle. (Getty Images)

It’s hard to not get swept up by the passion exhibited by Cold War Kids’ chief vocalist, Nathan Willett. Wailing on runaway tracks like “Miracle Mile” or aside the stomping thump of “Hang Me Out To Dry,” the California-based frontman’s voice is as much of an instrument as the guitar or piano he mans, raising or lowering the level of each song with his exasperated huff. Potent enough to cater to Canalside’s late afternoon crowd or simply steal the entire festival, Willett and Co. should not be missed by anyone swinging hula hoops in the shadows of HarborCenter.

Gaslight Anthem played a sold-out show with Against Me! in September 2014. Now, they're headed back to Buffalo for Kerfuffle. (Erica Morano/Special to The News)

Strap on a guitar, bellow blue-collar anthems and hail from the Garden State and you’re certain to be linked to Springsteen. For many bands, this association is merely geographical. For Brian Fallon and his Brunswick, N.J.-born Gaslight Anthem, it’s more than that. Songs off past albums like “The ’59 Sound” and “American Slang” echo the hopeful and hard-luck tales of Springteen’s America, but storm forth with the amplified Fenders and tattooed snarl necessary to stand on their own.

Steven McKellar of Civil Twilight performed at Thursday in the Square at Lafayette Square in 2010. The band has been booked for Kerfuffle. (Buffalo News file photo)

Listen to material produced by South African brothers Andrew and Steven McKellar and you’ll hear a smattering of influences, from Radiohead to Travis to Manic Street Preachers. But absorb the sound they’ve created with drummer Richard Wouters and guitarist Kevin Dailey and you’ll be able to both identify a band on the rise – as evident on the quartet’s latest release, “Story of an Immigrant”– and appreciate their ability to seamlessly transition from anthemic to ambient.

In the Valley Below

In the Valley Below will play a slot at Kerfuffle.

John Paul White and Joy Williams of the Civil Wars. Michael Trent and Cary Ann Hearst of Shovels and Rope. Alex Scally and Victoria Legrand of Beach House. Alt rock hasn’t been short on its male-female duos over the past five years, but that doesn’t negate room for electro-pop pair Jeffrey Jacob and Angela Gail. The two teamed for last year’s moody debut, “The Belt” – complete with Jacob’s steady guitar and Gail’s ghostly vocals – and should prove a swaying change of pace within Saturday’s lineup.

The Mowgli's will perform at Kerfuffle this week. (Getty Images)

If In the Valley Below was booked to be Kerfuffle’s shade, L.A.-based gaggle Mowgli’s may have been scheduled as the day’s sunshine. With an exhausting array of danceable hooks and regurgitatable refrains – whether on alt-radio smash “San Francisco” or the band’s latest single, the beautifully timed “Summertime” – the eight-piece act should inject the day’s staid attendees with ample glee via a set’s worth of saccharine.

Song to request: “Make It Right

New Politics is part of the Kerfuffle lineup.

Name-dropping borough sites or its live cover of Beastie Boys’ “Sabotage” would lead most to conclude the unkempt trio known as New Politics is as Brooklyn as Vinnie Barbarino and Freddie “Boom Boom” Washington. Not the case. The Copenhagen-born trio simply looks the part and, in the process, provides rock thrust – found on percussive boppers like “Harlem” – as good as anyone currently claiming Williamsburg residency.

Song to request: “Everywhere I Go (Kings and Queens)”

Saint Motel will produce a dance party at Canalside during Kerfuffle. (Cooper Neill)

For the dance-party portion of this year’s Kerfuffle cacophony, festival organizers offer yet another Western participant, Los Angeles’s Saint Motel. With 2012’s “Voyeur” and last year’s “My Type” – complete with its cowbell-accented title track – the A.J. Jackson-helmed quartet should deliver the day’s best taste of club bounce and shimmering synths for those inclined to strut. 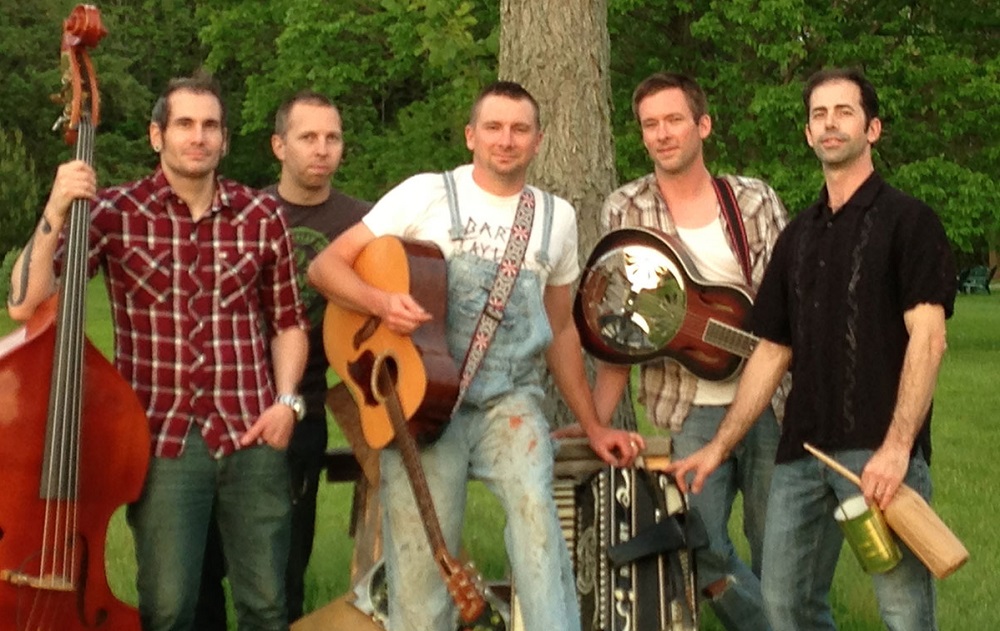 Opening the day will be Fredonia-bred Americana avengers, Uncle Ben’s Remedy. Winners of its slot via the Artvoice BOOM band competition, the quintet’s rollicking style has regularly entertained barrooms and park pavilions before and since the release of its 2014 debut, “Yesterday’s Clothes.” Look for more of the same when its Southern Tier twang starts the festivities.

Interested in more? Find the complete Kerfuffle 2015 playlist on Spotify: