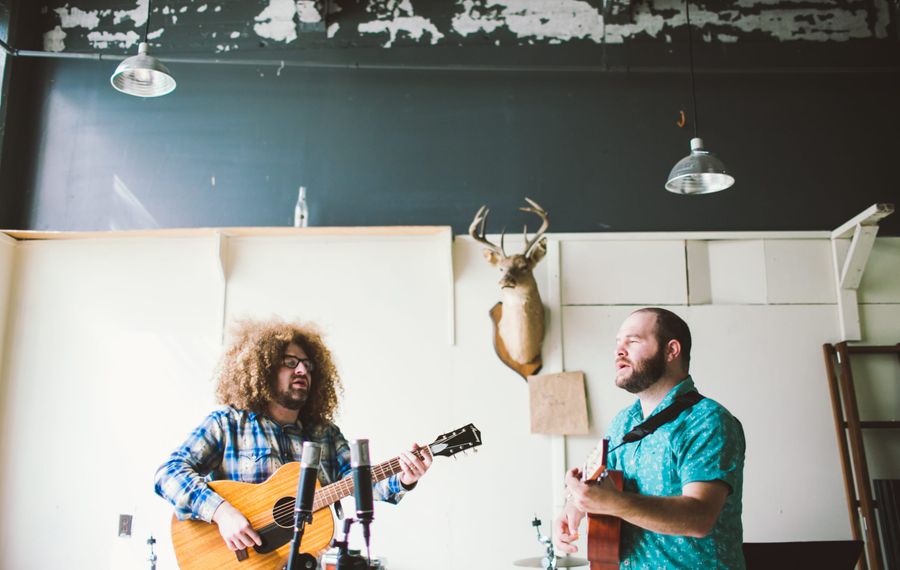 Kingdom Bound is featuring more than 50 musical acts, from all around the world. Among them are two Western New York brothers who can really claim to have that power in the blood.

Anthony and Chris Hoisington, in a story unusual to the Buffalo area, spent their early childhood on the road, singing with the McClurg Family, a Southern-style gospel group anchored by their grandfather, Pastor Bill McClurg.

“My uncle, my aunt, my mom, my dad, everyone played and sang,” said Anthony Hoisington, now 33. “And so for the first six years of my life, and my brother’s, we grew up on the road with them, in a motor home, going all over the country, singing.”

“They retired somewhere in the early ’90s from the road, and then of course, my brother and I grew up and learned to love and appreciate music and then started to want to get into the music industry ourselves, that sort of thing. My grandfather was sort of the patriarch.

“He basically was the one who taught my brother and me how to lead worship, kind of do a life of music and ministry together. We got signed to a record label called Integrity a few years back. At the time, we had a different name. We were going by Relevant Worship. We were struggling with the idea that we didn’t want that name anymore, and the label agreed. We thought, what are we going to call ourselves? That’s when we decided to go with Brothers McClurg, to pay homage to our family, and the music ministry we had grown up with, and that they began.”

One of the McClurg Family’s vinyl albums, “Mostly Mary,” was located on eBay.

While the asking price of $159 was unaffordable to the average Buffalonian, the jacket could be viewed online. It pictured Pastor Bill McClurg with his three children: Bill Jr., 25, and two sisters quaintly named Martha and Mary. Martha, 17, plays bass and saxophone and sings harmony. This particular album, though, spotlighted Mary, who grew up to be the Brothers McClurg’s mother. The notes state: “Mary, 15, is the real singer of the group. Her voice is her instrument, and many leaders in the gospel music world have claimed it to be the finest (to God be the glory).”

The notes on the back of the jacket bring the past to life.

“We travel in a self-contained motor home, so all we need is a place to park and some electricity (if possible),” the McClurgs stated. “We come only on a free-will offering basis, and of course Jesus meets our every need.”

The family’s Akron address and phone number followed, and listeners were invited to call collect. “We are available to sing anywhere and anytime.”

Hoisington, as a boy, loved the itinerant life.

“I remember as a kid just sort of enjoying being around my little world of people that I knew,” he said. “Most kids look up to their dad and mom, and just to travel with them all the time was great. When they went to work, they never left. You just sort of went to work with them every day. I remember things like, I was just able to play my dad’s drums every night after the concert was over, help them tear them down. That was the first instrument I learned to play. That was kind of a fun thing to do, play the instruments when it was all over.”

Pastor Bill McClurg, his grandson said, is now 92 and still lives in Akron. He has occasionally attended Kingdom Bound and continues to volunteer his music, performing in nursing homes. Though the worship music the Brothers McClurg play might not be their grandfather’s worship music, they look back on their time with him as a deep influence.

“Foundationally speaking, it really gave us an insight into the old hymns, more storytelling music, rather than what modern contemporary worship being now,” Hoisington said. “He was more of like a Johnny Cash-like worship leader, a lot more stories rather than anything else. It was very foundational.”

Anthony Hoisington currently leads worship services at Northgate Free Methodist Church in Batavia, and his brother Chris leads at Lafayette Presbyterian Church. They are on the road about a week a month. They play grassroots churches of the type that used to welcome the McClurg Family. But they also play big festivals, and feel a special tie to Kingdom Bound.

“We’ve played a bunch of times there, grew up going to that festival,” Hoisington said. “We knew the director of festival, Fred Caserta. He knew my parents, helped them out when they were getting started as well. He was a music promoter in the area. He’s since passed away. We have a history there. The team has always been so helpful and gracious.”

The Buffalo waterfront, with its historic lighthouse, appears as the backdrop in the video to the Brothers McClurg song “Still,” from their 2014 album “Home.”

“We obviously feel connected here in a lot of ways. Our hope is, to just be a positive influence on our area. We believe the Lord isn’t done with this place yet.”