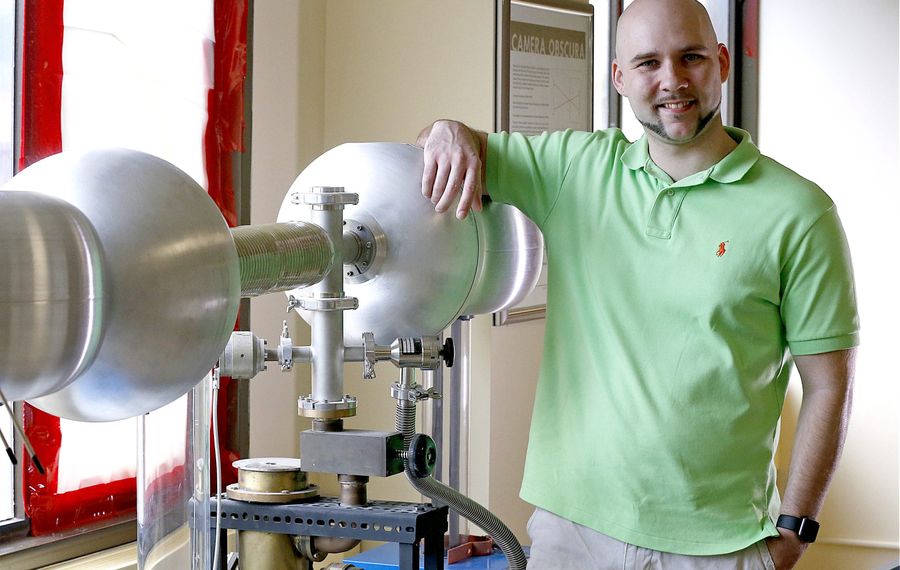 Numbers suggest that Sean Bearden shouldn’t be where he is today.

Most ex-convicts struggle mightily to stay within the confines of the law after they leave prison. More than two-thirds of them are arrested again within three years of being released.

But Bearden, convicted in 2005 for shooting a man at a Hertel Avenue gas station, always has been good with numbers. Exceptionally good.

He was counting change by age 3. He answered three-digit multiplication problems in elementary school without writing anything down. He was the only student to get a perfect score on a University at Buffalo mathematics test assessing readiness for advanced physics courses.

His recent mathematical calculations for spin lasers were so sophisticated they attracted the attention of the world’s foremost researchers in the field and helped him land a National Science Foundation Graduate Research Fellowship, one of the most prestigious and generous academic awards in the country.

But in Bearden’s life of numbers, the most significant of all might be 2,317. That’s how many days he spent behind bars. A split-second mistake in 2004 cost him 200 million seconds of freedom. Yet, if he hadn’t been incarcerated, Bearden, 30, figures his unfolding future as a physicist never would have been possible.

“It worked out the way it worked out. I don’t dwell on it. I don’t get angry that I had to do as much time as I did,” he said. “It’s a part of my life that definitely made me who I am.”

Bearden, once a high school dropout, now is a scholar. He graduated from UB in May with a dual degree in physics and applied mathematics and a 3.98 grade-point average. Later this week, he will travel to San Diego to begin research in condensed matter experimental physics, working with Dimitri Basov, the son of Nicolay G. Basov, a 1964 Nobel Laureate in physics.

“I call it ‘Good Will Hunting,’ but for real. And a better story,” said Ann Burke, Bearden’s mother. “I actually think the starting point for Sean was even lower than the one in that movie.”

Bearden doesn’t gloss over the details about who he was – a pizza-delivery guy who associated with criminals and carried an illegal .22-caliber revolver tucked in his pants because he “liked the security of it.”

He sits bolt upright at a cafe table inside Starbucks on the UB campus, sipping coffee between explanations of spin lasers and his criminal past. His appearance is a mix of prep and punk: black high-tops, khaki shorts and a Nautica shirt with a shaved head and neatly trimmed beard that narrows at the jawlines to triangular points. He has blue eyes, a rich voice tinged with a hint of street accent, and a knack for storytelling. His pastimes include Brazilian jiu-jitsu, a form of martial arts in which a combatant on the ground learns how to quickly overpower a standing opponent.

Born in Louisiana, Bearden grew up in the Town of Tonawanda with his mother, who studied English at Canisius College and works in business development for an environmental firm. Bearden’s parents divorced when he was very young. His father, Charles Bearden, works as a chemical engineer in Mississippi.

Despite his obvious abilities in math, Bearden was a disaster as an elementary and high school student. “I never liked school. I never had a desire to do well,” he said.

He ended up getting kicked out of Kenmore East High School. A couple of alternative high school programs didn’t resonate, either. When he turned 17, he dropped out altogether, promising his mother he’d get a General Equivalency Diploma instead. After two weeks in a GED course, he took the test and nearly aced the math portion, giving him a high enough score to get the diploma.

He worked briefly at a Long John Silver’s restaurant, then quit to deliver pizzas.

Increasingly, he also found trouble. He enjoyed hanging out on the East Side of Buffalo in neighborhoods where crime was rampant. He bought a gun off the streets to keep him safe, just in case.

“My life had no direction,” he wrote in the personal essay portion of his application for the National Science Foundation Graduate Research Fellowship. “I often found myself in trouble with law enforcement.”

Early on the morning of July 15, 2004, while getting a bite to eat from a gas station convenience store at Hertel and Colvin avenues in North Buffalo, Bearden encountered another pizza deliverer, Michael Hardick. Bearden hardly knew Hardick, although he had seen him arguing a day earlier at the pizzeria with one of his good friends, he said.

According to Bearden, Hardick and another man confronted him outside the store. Bearden maintains that Hardick threatened him and punched him in the head. Bearden said he drew the weapon and pointed it when he began to feel cornered and in danger.

“I remember saying something like, ‘Just leave.’ And he didn’t want to leave,” he said.

Bearden pulled the trigger. Hardick ended up at Sisters Hospital with a bullet lodged in the back of his neck, according to a Buffalo police report. He was not critically injured and was treated and released. Police found the gun ditched in a yard on Hertel Avenue, and they arrested Bearden three days after the shooting.

Burke was on a business trip in Pittsburgh when she received the call that her son was locked up and accused of shooting someone. She climbed into the car and headed home.

“I drove two and a half hours the wrong way. I didn’t know what planet I was on, but it wasn’t Earth,” she said. “I was just most stunned because of the circumstances. There’s no question he had lost his way. I wasn’t blind to that.”

Having an illegal gun alone could have put Bearden behind bars for up to 15 years, so when the Erie County District Attorney’s Office offered to allow him to plead guilty to a lower charge, first-degree attempted assault, Bearden agreed. Then-Erie County Judge Shirley Troutman sentenced him March 11, 2005, to eight years in the state penitentiary.

Bearden maintains that he felt his life was in jeopardy when he fired the gun. Still, he admits, “What I did was wrong. It was a criminal act, and that’s all there is to it.”

Bearden said he stayed safe by lying low and not trying to impress anyone. He also knew a lot about underground rap music, which helped him connect with some inmates. “I was just me,” he said. “I was honest.”

Bearden took to playing poker and Scrabble. And reading. Plenty of reading. His mother brought him a biography of poker player Doyle Brunson and the huge best-seller “The DaVinci Code.”

When he finished “The DaVinci Code,” Bearden sought out and read the source material in its bibliography, said Burke. Bearden had never before been much of reader. But in prison, Burke said, books “just sparked something in his imagination. It was a way to think outside the walls or to be transported outside the walls.”

Bearden’s older brother brought in Malcolm Gladwell’s “Blink” and Bill Bryson’s “A Short History of Nearly Everything” – two books that got Bearden hooked on the possibilities of science, and physics in particular. “I really didn’t know what the term meant, but I knew it was difficult,” said Bearden. “I had nothing but time, so I thought I might as well do the hardest thing I can do.”

But to get a deeper understanding of physics and quantum mechanics, Bearden knew he needed to get his hands on textbooks. His father helped pay for him to enroll in correspondence college courses through Ohio University. Burke also got her son in touch with an uncle in Alabama who had studied physics, and the two wrote back and forth, further spurring Bearden’s interest in the subject.

Bearden struggled sometimes to get the materials he needed for his studies. The prison, for example, wouldn’t allow him to use a scientific calculator in his cell, so he relied instead on old-fashioned trigonometric and logarithmic tables. “I found ways around it,” he said.

In 2011, just before being released from prison, he earned an associate degree in general natural sciences with a grade-point average of 3.947.

UB accepted him for admission in spring 2012, at the recommendation of Bearden’s parole officer. He was a star student from the beginning.

His crime still haunts him. In jail, Bearden often thought about the blemish on his record going forward. “It’s more like a pock mark,” he said.

An associate degree wouldn’t be enough. He had to do more positive acts to try and balance things out. Advanced Honors Program at UB: check. A Barry M. Goldwater Scholarship: check. A bachelor’s degree: check.

“Academics was just the pathway to redemption,” said Elizabeth A. Colucci, coordinator of fellowships and scholarships at UB. “He took responsibility for the choices he made and decided to take ownership of his life.”

Bearden’s mother for years had struggled with how to get him to study and keep him in school. “I think initially, when he was younger, he was just bored,” she said. “School just wasn’t for him.”

Education sometimes has a way of growing on people. Now, Bearden can’t seem to get enough to study.

The pathway isn’t finished. He has been researching how spin lasers someday may allow for data to be sent at even faster rates than conventional lasers.

UB physics professor Igor Zutic expects him to make a mark in the world of physics.

Bearden has an elegant way of solving physics problems that goes beyond being proficient in mathematical methods. He’s more like a classical music composer, with a kind of “musical ear” for doing physics, said Zutic. And he’s a bulldog when it comes to overcoming setbacks in research.

Bearden sometimes wonders what would’ve happened if he hadn’t gone to prison.

But none of the calculations in his mind bring him to where he is now.

“I’d probably just be your average Joe,” he said. “Maybe a decent job, but who knows?”