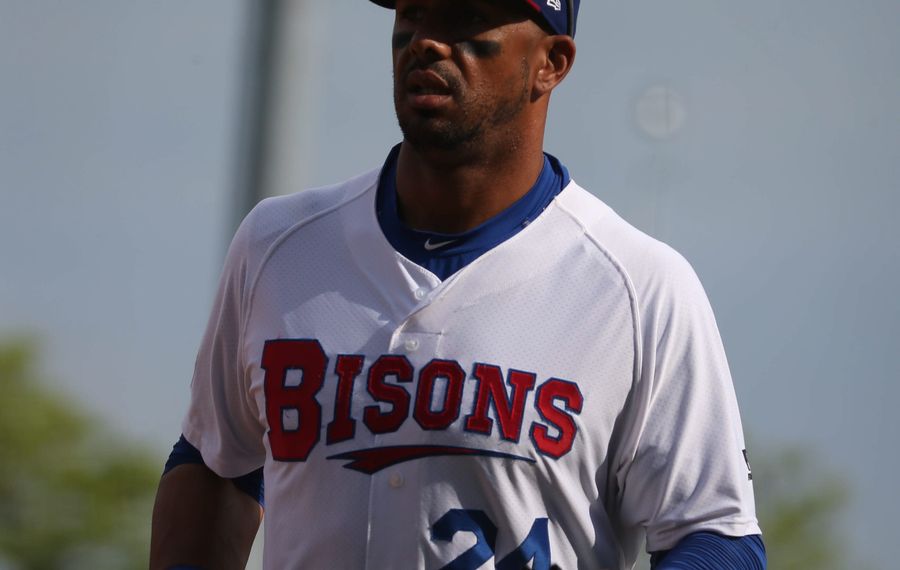 At a few minutes after 1 p.m. on Saturday, a tall, solitary figure came rolling down the stone concourse to the Bisons clubhouse in the bowels of Coca-Cola Field. Chris Dickerson was traveling by skateboard and decreasing his carbon footprint.

Dickerson, a 33-year-old outfielder, could be the most environmentally conscious player in baseball, if not in all of pro sports. He rode a bicycle to Camden Yards every day when he played with the Orioles two years ago. He drove a hybrid in Cincinnati.

“I grew up an environmental kid,” said Dickerson, a Los Angeles native. “My dad was really big on recycling. He was adamant about separating recyclables – old paper, glass, bottles, etc. – so I took it from him. I saw the effects of what happens when we’re not responsible.”

He remembers boogie boarding or surfing through old plastic bags and bottles in the Pacific Ocean. There were many times when his baseball teammates couldn’t show up to practices because of smog alerts.

The culture of waste in this country gnawed away at Dickerson as he grew up and went off to college at Nevada and then began his pro baseball career. He saw how cavalier baseball teams were about the environment.

Then, in 2007, Dickerson came down with the flu and spent a few days at home, catching up on his DVDs. He popped in “An Inconvenient Truth,” the award-winning documentary about Al Gore’s campaign to inform people about the crisis of global warming.

“It was a culmination of things,” he said. “That movie kind of set the precedent that we can all find our way to help, and that something really needs to be done.”

Later that year, while playing in Triple-A Louisville, Dickerson noticed how his teammates would go through hundreds of plastic bottles and toss them into the trash. By chance, he saw a magazine ad for aluminum reusable bottles.

“I thought it was a cool initiative to cut down on the plastic use in the clubhouse, so I wrote the company an email and got 50 water bottles sent,” Dickerson recalled, “so people could refill them rather than use plastic. We cut back on a huge number of plastic bottles.”

He didn’t stop there. Dickerson wanted to start an organization to raise environmental awareness among athletes. So with the help of former pro baseball player Jack Cassel (brother of Bills quarterback Matt), he founded “Players for the Planet,” a nonprofit organization devoted to educating communities about the environmental crisis.

In his mission statement, Dickerson said there needed to be a “sense of urgency among all Americans” and said the environmental issue “will be felt by generations and generations to come.”

In 2009, Players for the Planet ran an e-waste recycling drive in Cincinnati. Dickerson and his Reds teammates collected 200,000 pounds of used electronics, a record for three days. The drive is now an annual event in Cincinnati. Earlier this month, it was held over four days. They set a record for recycling cars on the day Dickerson hit a grand slam for the Bisons.

Dickerson said PFTP, which offers environmental education in classroom-like settings, has run similar recycling programs in Minnesota, Kansas City and Anaheim. They’re looking to expand to more big-league markets, including Boston and San Francisco. The organization is still small, but it has teamed up with Natural Resources Defense Council, which has environmental projects with more than 100 professional teams.

He hasn’t brought it to Buffalo. It’s hard to plan when you don’t know where you’ll be playing until just before the season. There’s a lot of work involved, such as arranging volunteers, getting sites for the recycling drives.

It can wear on a guy, moving around so often during a career. The Blue Jays are Dickerson’s seventh big-league team. Counting all the callups and demotions in various locales, Buffalo is the 23rd stop in his 13-year pro baseball odyssey. The 6-foot-4, 230-pound lefty still believes he can play regularly at the major-league level, given a full, healthy opportunity.

“Yes,” said Dickerson, who brought a six-game hitting streak into Saturday’s game. “It’s not as if I want to be sitting here in Buffalo. So yeah. If I don’t, I should pretty much quit now.”

Dickerson said he hated the question about his remaining prospects as a regular in the bigs at his age. It bugs him just as much to hear skeptics deny the very existence of global warming and an environmental crisis on our planet.

“Yeah, it does,” he said. “I was fortunate enough to speak at the United Nations in 2009 and receive an award there for the environmental work. We had a collection of athletes from all over the world giving first-hand witness on how the environment is changing.

“There’s no denying it. It doesn’t take a smart man to look and see the changes in the polar caps or how these different glaciers are receding year after year after year.”

Players for the Planet has more than 50 professional athletes on board now. Some day, Dickerson would like to be the driving force behind a Green Week in the Major Leagues, similar to what the NBA has done in recent years to shine a light on the environmental problem.

It would help, of course, if Dickerson found his way back to the Majors and had a big impact. He has hit .257 in 820 plate appearances over parts of seven big-league seasons. He has one postseason at-bat in his career – for the Yankees in 2011. Do you ever wish you had the fame of a Mike Trout or Albert Pujols in this venture?

“Absolutely,” he said. “It’s a nonprofit organization. The media platform is bigger because you’re a big name, rather than being a no-name grass-roots type operation. If they were to start something, it would have exploded by now.”