Preservation board meets this afternoon. Nothing on the micro house proposed for the micro Linwood Avenue lot. I'm guessing owner is spending more time on redesign this time than last, when his plan was rejected for being too similar to a previous proposal.

But here's something  kind of interesting. There's a request to grant  local landmark status on this small building at 2256 Bailey Ave.
. 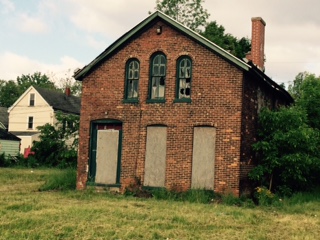 One day  in late April,  Corey Auerbach, a young attorney from Damon Morey,  spoke on behalf of Joe Dash before the city zoning board.  Dash, Auerbach explained, wants to turn the the former supermarket building he owns on Kenmore Avenue into self-storage facilities. The neighborhood association, after   initially opposing the idea, later  backed the plan. So it was a bit of a surprise when the zoning board turned the plan down in April.

Wednesday, Damon Morey was back at the zoning board on Dash's behalf. But this time, the big guns were out. While Auerbach was there, he wasn't doing the talking. That was left for Jeff Palumbo, the high-powered, highly experienced Damon Morey attorney with a reputation for getting developments pushed  through in the suburbs.

Palumbo asked the board to reconsider its previous rejection of the project
Since the last zoning board meeting, Palumbo said, the proposal has been tweaked. More brick has been added to the front and side of the building so it will fit in better with the neighborhood. Also there's more green space in the plan.

"We've added extensive amount of buffering to the site," Palumbo told the board.
The attorney's argument worked. The board agreed to reopen the issue, and reconsider its past rejection.
I'll have more on this later today on Buffalonews.com and tomorrow in The Buffalo News.

But can I park here?

I was thinking of making this a regular item, so let me know if you spot any confusing signs postied around the city. Thank you! 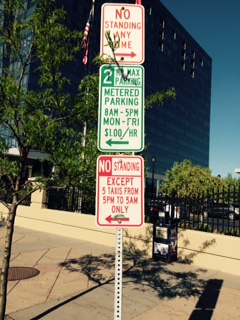