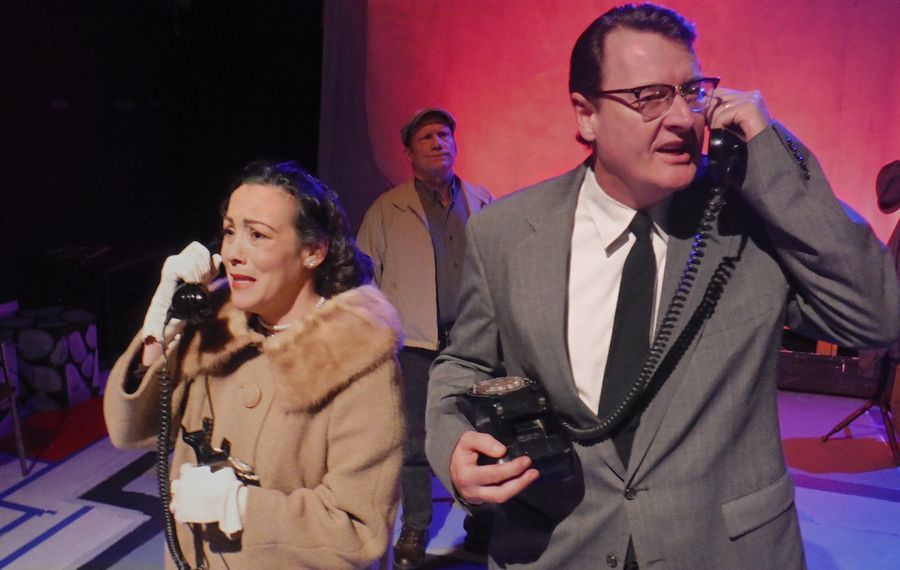 The 19th century American poet, essayist and philosopher, Ralph Waldo Emerson, obviously never met Emanuel Fried. But, he certainly had someone like “Manny” in mind when he said these words: “All life is an experiment. The more experiments you make the better. What if they are a little coarse, and you may get your coat soiled or torn? What if you do fail and get fairly rolled in the dirt once or twice? Up again, you shall never be so afraid of a tumble.” The late Manny Fried took many a tumble. And he was rarely afraid.

Subversive Theatre, local playwright Anna Kay France and director Greg Natale have teamed to adapt Fried's “autobiographical, non-fiction novel, “The Un-American,” into a play, a task Fried once deemed impossible. However, the estimable France has used, with loving care and editing license (condensing, omitting, streamlining and inventing on occasion), Fried's meticulous remembrances, 520 very personal, minutiae-laden pages that bring to life a few of those “experiments,” the tumbles Emerson suggested were vital.

Fried was nearly 98 when he died in 2011, a modern-day Renaissance man who wore many hats well. He was a factory worker, a football player for Canisius (Jewish Manny amid the Jesuits), union activist, reporter, actor (stage name: Edward Mann,  a colleague of Clifford Odets, Elia Kazan, John Garfield, John Randolph and others), playwright, drama/film critic, adjunct college professor, World War II Army veteran, husband and father. Bronx-born but Buffalo tough from a toddler.

“The Un-American” gets quickly to a key year in Fried's life: 1954. His work as a union rep for several locals often involved him in verbal and violent clashes with management, much to the dismay of his wife, the former Rhoda Lurie, and her family, owners of the posh Park Lane Restaurant on Delaware Avenue. His penchant for newspaper headlines and the occasional arrest  often tested the marriage between street-wise and trigger-tempered Manny and the refined, artsy, societal debutante and their two young daughters.

The search for communist infiltration in labor unions led to Fried's name surfacing in House Un-American Activities Committee hearings. Summoned to appear before HUAC, with jail time possible, Fried challenged his kangaroo court accusers, declaring the committee unconstitutional with no power, even to exist. He was excused and cleared but blacklisted for years, penalized for hearsay, employment was scarce, even his acting career impacted.

Novelist Fried called his protagonist “Danny Newman” and Rhoda became “Helen.” Playwright and adapter France has kept the same character names and added a self-advising alter ego, a conscience,  for Danny. The pairing is innovative and a play saver.

“The Un-American” teems with character actors and director Natale puts them to great use: Richard Lambert and Guy Wagner are the two Danny's, inseparable of course, second-guessing, their decisions always coming down to: “What would Helen think?”

“The Un-American,” instructional and a history lesson, plays out on a sparse, gray set with  chairs, a table or two. A slide presentation and vintage photos establish time and place - how wonderful to see once more a  bustling Central Terminal. The result is a fair and honest snapshot of an extraordinary crusader for the greater good, not a superhero but a guy committed to make life better for the working stiff - at a huge personal price.

Subversive's Kurt Schneiderman, France and Natale's work on “The Un-American” is loyal to the amazing spirit of Manny Fried. Very apt. Fried was huge on loyalty.    He would have been pleased.