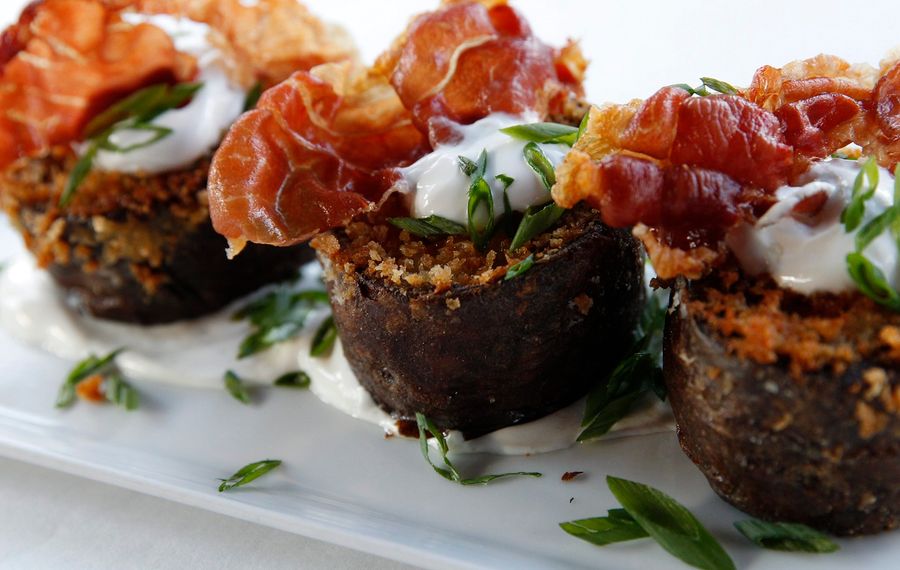 Bacchus, on Chippewa Street a few blocks from Shea’s Performing Arts Center, is a restaurant with range. It’s the only place in Buffalo offering its customers both valet parking and potato skins as an appetizer.

“I grew up cooking in those places, with potato skins on the menu,” said chef-owner Brian Mietus. Now he owns a white-tablecloth fine dining restaurant that gives its phone number as 854-WINE, where servers pour your soup from a flask while you watch.

Mietus said he gets a kick out of “taking those old comfort dishes and putting a fine twist on them.”

At Bacchus, potato skins start out the same way, with big Idaho potatoes. Cooks cut three fat discs out of them. “We roast them, then scoop them out, and stuff them,” he said.

Instead of the usual shredded cheddar blend, the payload is gorgonzola, cream cheese, garlic, onions and herbs. Parma prosciutto, crisping it up in the oven first, upgrades the bacon topping.

“Once we stuff them, we panko-bread the tops, just enough to keep the filling in there,” Mietus said. “We deep fry them to order, and then top them with the scallions, sour cream and prosciutto.”

Then they’re whisked to the table while they’re still oozy inside. It’s an appetizer that fits into a pretheater nibble as well as a summer evening watching classic movies on the Bacchus patio. They are three to an order, for $9.

“I think some people get a chuckle out of it, then when they get them, they realize what we’re up to,” said Mietus. “Other people are going to assume that if it’s on the menu at Bacchus, it’s probably not your regular potato skins.”