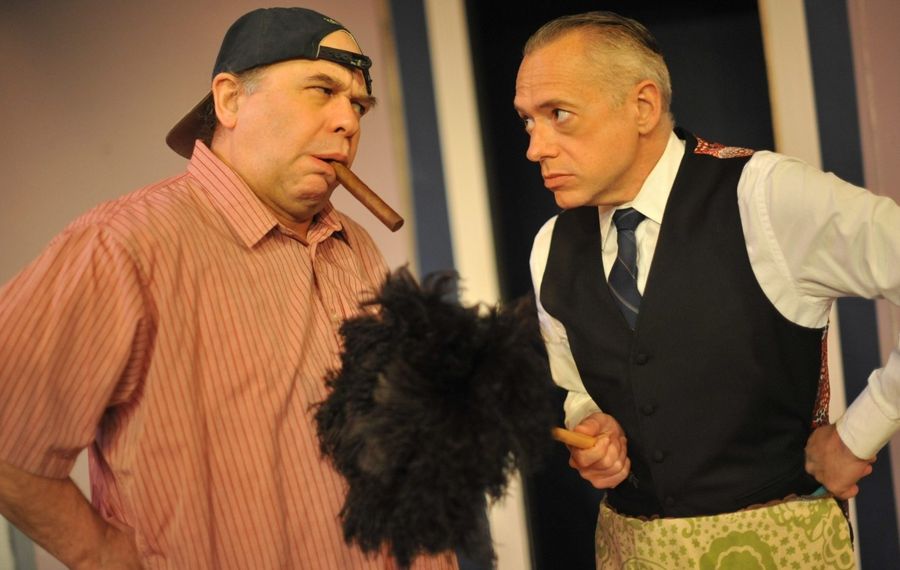 Third time’s a charm this season at Jewish Repertory Theatre. So far, the company’s “Season of Humor” has given us comedy about Jews, by Jews, and in its last installment – Neil Simon’s “The Odd Couple” – a comedy that has, ostensibly, nothing to do with Jews.

Simon is Jewish, and you could argue that his Jewish sensibility, comedic or otherwise, is on display here insofar as it is based in New York, and probably includes Jewish characters. Felix Unger and Oscar Madison – the most famously incompatible roommates in the history of cohabitation – may or may not be Jewish, but that doesn’t matter. They use humor to both back out of and charge through difficult times; that’s as Jewish as it gets.

The company at JRT takes great care with this masterpiece work; comedically speaking, they know exactly what they’re doing. Director Saul Elkin hits Simon’s beats with all the measurement they dictate; he is not a swift playwright (though that may just be a sign of his era), but he can schedule a laugh with the best of them. Simon’s words are treated so kindly, so carefully, we remember what a treasure they are. Every word in every well-crafted zinger is heard, loud and clear – louder when Oscar yells, clearer when Felix whines.

Despite that, there’s an important element missing in this otherwise fluent staging: that New York sensibility, arguably the play’s sole Jewish element. This is evident mostly in design and detail, and thankfully not any immeasurable way. That inescapably New Yorkness that is tried and true in Simon’s writing is intact, but not in most actors’ accents or other distinctions of locality.

Nathan Elsener’s set, however well appointed, is not distinctly Manhattan, and certainly not distinctly 1965 Manhattan. When the neurotically pristine Felix moves into successful sportswriter Oscar’s Upper East Side apartment following his soap-operatic marital separation, he is supposed to make an impact on his dirty friend’s shabby dwelling. You’d hardly know that from this clean interior, detailed décor and unblemished furniture. Oscar would never live in this apartment, not in this condition.

Prop choices miss the dateline altogether: Oscar’s poker buddies snack from a modern-day Planters Peanuts canister, read from local Bee newspapers, and sit on chairs you would easily find at Raymour & Flanigan. These are not minor details, and distract more often than you’d think.

In almost every other way, this is a tip-top production. Tom Loughlin, as Oscar, and Tim Newell, as Felix, are a mismatch made in heaven. They have huge shoes to fill: Art Carney, Walter Matthau, Jack Lemmon, Tony Randall and Jack Klugman are estimable talents with distinct takes on these archetypes.

But Loughlin is decidedly his own Oscar, appearing as stinky as his rundown fridge. His orneriness doesn’t convert to sourness, leaving him available for redemption and, when entertaining the effervescent, British Pigeon sisters from upstairs, boyish flirtation. He’s self-aware of his disgraceful presence, rather than another clichéd blue-collar bambino from one of the “B” boroughs. If you thought Matthau defined this role, think again.

Newell, meanwhile, walks the very fine line between being adamantly in character and unavoidably Tim Newell. He is one of those actors who, given the right role, can disappear into himself and never leave you. I was completely engaged with his Felix, whose perfectly polished shoes are inexplicably tied to Lemmon’s sulking, dragging feet. Newell is more heartwarming than Lemmon’s pathetic pill, which alleviates the mood considerably. He is a stronger Felix, too, though not ashamed of his tears.

It takes a while to see this as a fresh “Odd Couple” and not a soulless retread. These punching bags aren’t so familiar, but they’re comfortable – comfortably uncomfortable, as it were. If the actors’ physical environment supported that authenticity, it would have been a home run. Regardless, there is, in the great tradition of New York’s Jewish humorists, a relatable contradiction at play; enough to make this ultimate comedy churn out winning line after winning line.

What: “The Odd Couple”