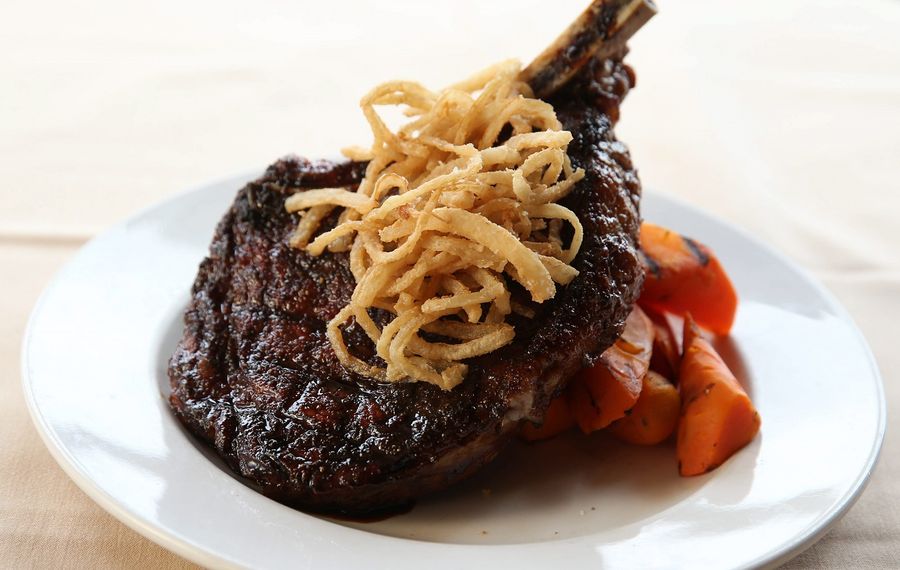 As The Buffalo News’ designated diner, I’m just one guy hunting for gems amid Western New York’s hundreds of places to eat. So I badger people for their favorites. In the Southtowns “special occasion” class, Rick’s on Main flies to the lips of a remarkable number of people. I finally went last month, and my faith in the wisdom of crowds was restored. In a two-story brick-and-beam space carved out of a historic house, I found large portions of fresh food, precisely cooked and presented with panache. Rick’s on Main evokes a Civil War-era tavern that discovered the joys of a well-placed lemon vinaigrette. ¶ We met our guests in the first-floor bar, a low-ceilinged room that looks just as old as the rest of the establishment, even though it was added when owners Rick and Cathy Pohlman transformed the place. Ask for a martini and the bartender asks if you want blue cheese-stuffed olives, the first of many small ways to crank up your hedonism index.

We traipsed up the stairs to our table, admiring the view of downstairs diners through a gap “punched” through the brick wall. The upper dining room is crowned with hand-hewn beams that were part of the original house, built in 1860.

A bread basket included three kinds of housemade rolls including multigrain, white and one studded with dusky Kalamata olives.

The specials list needs to be taken seriously here. It reflects the of-the-moment seafood and vegetables Rick Pohlman and co-chef Chris Gibney are exploiting, plus long-standing favorites that have been around since the dawn of Rick’s.

A guest recommended the pepper and onion stack ($9.95) as a dish that made her happy as a vegetarian, and still beckoned even after she broadened her horizons. When it arrived, I could see why. It was poblano and sweet bell peppers cut into inch-thick slices and tempura-fried, along with similarly sized onion rings. Those are stuffed with a salad dressed in lemon vinaigrette, piled on fresh mozzarella and tomato, then accented with shaved Parmesan and balsamic reduction. The collision of fresh and fried, tangy and savory whetted our appetites, and we hit it like a Class 3 hurricane versus a palm-frond hut.

Scallop tostadas ($16.95) is another menu perennial. Half a dozen tender seared scallops were perched on a colorful Mexican landscape of fresh-cut pico de gallo, black beans, grilled corn and guacamole on flour tortillas. Lacings of chipotle cream added richness and a lick of smoky heat. Pricey, but a well-balanced appetizer that eats like an entree.

Another fried-plus-fresh appetizer was chicken ravioli ($10.95), poultry-stuffed wontons fried to golden, plated on a sesame mayonnaise and topped with a crunchy Asian slaw of Napa cabbage, carrots, red onion, sweet bell peppers and herbs. The gingery dressing included a spicy kick that I enjoyed, but others found it too much.

I wanted more kick in the Thai mussels ($13.95), a dozen bivalves in coconut broth with carrots, snow peas, onions, garlic and cilantro. In retrospect, I was looking for Thai curry despite the menu not advertising it. Two huge toasted crostini were excellent for sopping up the sauce.

We sampled four salads: cherry, spinach and arugula (each $9.95), and Fall Creek ($11.95). The spinach version was the table favorite, with applewood smoked bacon vinaigrette, chopped egg, rye croutons and curls of white cheddar. Dried cherries sweetened the cherry salad, with toasted almonds and goat cheese, a fine salad even though I couldn’t find cherry flavor amid the arugula’s nutty-peppery flavor.

The Fall Creek salad was field greens dressed with raspberry vinaigrette and loaded with extra content like fresh strawberries and blueberries, and canned mandarin oranges, peanuts and feta cheese, plus thumb-sized egg rolls stuffed with more cheese. Those were room temperature and chewy, but otherwise it was a successful fruity entree-scale salad.

When I ordered the molasses-glazed 24-ounce ribeye steak ($46.95), I was expecting the usual desultory flavor wash that passes for glaze in many kitchens. What I got was a candied steak, still pink as requested inside its salty-sweet crust, with a husky molasses note. Quite a feat, amplified by its accompaniments of cheese-enriched potato croquettes, crispy shoestring onions, carrots and grilled broccoli. Like our other entrees, the size made it clear that ordering three courses at Rick’s was seriously excessive.

Lobster pasta ($31.95) teetered on the edge of being too much of a good thing. The lobster meat was tender and plentiful, the asparagus wasn’t mushy, and the pappardelle pasta still toothsome. But brandy cream further enriched with Parmesan blanketed some of the fresh vegetable and seafood nuances. A tomato broth helped lighten up Cat’s seafood tortellini ($29.95), topped with three each large scallops and prawns, atop cheese tortellini tossed with banana peppers, pancetta, Swiss chard, onions, garlic and herbs. The scallops were seared perfectly, the shrimp slightly chewy.

Orange-ginger-glazed Canadian walleye with three-bean quinoa pilaf might sound suspiciously like health food next to its neighbors. But when it’s topped with a uniting citrus-fennel-Kalamata salad, you can enjoy the crunchy-tangy-salty punch with both sides of the plate. The fish’s flavor was largely overwhelmed, though. Beans supporting fish isn’t common, but it was a satisfying relationship.

Did that stop us from ordering dessert? No.

A deep-dish apple pie held tender apples in a shortbreadlike crust and a crumb top, a tasty dessert that would have benefited from being more than lukewarm. White chocolate almond caramel cheesecake avoided oversweetness to deliver toasted nut notes. Marble brownie sundae was a big sundae piled with bananas and glazed pecans on a foundation of excellent brownie. Crème brûlée trio escaped gimmickry with dead-on espresso and delightfully real-tasting raspberry flavors. (All were $7.95.)

Our server was personable, swift and helpful in discussing wine.

Vegetarians could get more play at Rick’s. A few dishes, like the Fall Creek salad and walleye, seemed overly elaborated, with more ingredients than were needed. But for the most part, Rick’s on Main delivered what it promised – an American abbondanza.