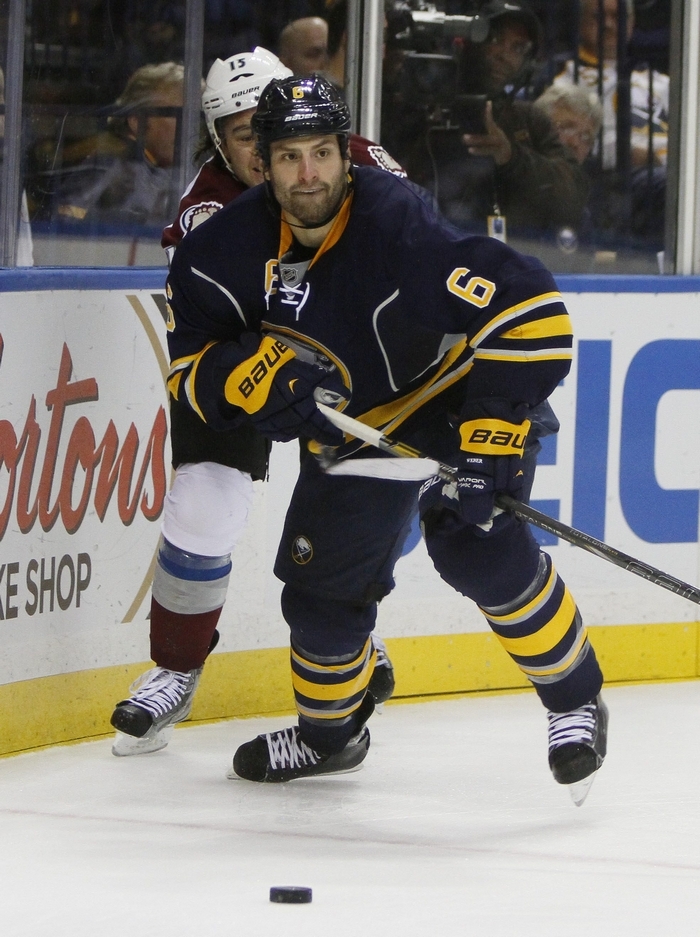 Mike Weber says he owes everything he has to the game of hockey. (Mark Mulville/Buffalo News)

GLENDALE, Ariz. – No one in Mike Weber’s family was into hockey, but that changed when he was 6 years old. The youngster walked to a rink near his home in Beaver Falls, Pa., and it was love at first sight.

“I can still remember going to the rink and watching it and seeing it,” the Sabres defenseman said. “At 6 years old, I fell in love with it. I knew I had to play this game.”

Weber dedicated his life to making the NHL, so it’s fitting that he’s up for an award given to the player who best exemplifies the qualities of perseverance, sportsmanship and dedication to hockey.

The Buffalo chapter of the Professional Hockey Writers’ Association has voted Weber as its nominee for the Masterton Memorial Trophy. Writers in each NHL city select a candidate, and the winner is chosen from the list of 30 players. The award is named for Bill Masterton, the only player in NHL history to die as a direct result of injuries suffered during a game in 1968.

Weber earned the nomination in part by being a veteran leader on a young team in need of them. The longest-tenured player in the organization mentors teammates such as Ramsus Ristolainen and Nikita Zadorov. He shows how to be a spokesman during tough times, like when he eloquently represented the Sabres in speaking about the death of former teammate Steve Montador.

The 27-year-old leads Buffalo in blocked shots while playing a career-high 18:43 per night.

“I truly believe this is the greatest game there is. It’s fast, it’s hard. There’s nowhere to run out of bounds. Guys are flying around 20 to 30 mph and shooting the puck 100 mph. It’s a special game. It’s old-school gladiators at times.”

Weber also recognizes who the true heroes are in his world. He sponsors the “Tickets for Troops” program and donates tickets to every home game to members of the military, with the honoree invited to the dressing room after the game.

“It’s nice to give back to them because obviously we wouldn’t be able to enjoy this game, we wouldn’t be able to enjoy the simple things in life if we didn’t have their sacrifices and their bravery,” Weber said. “It gets emotional in the locker room sometimes. You see these guys and you see how much they enjoy just coming to a hockey game. It’s hard to convey how appreciative you really are of them.

"It’s been something special, and as long as I’m here I’ll keep it going.”