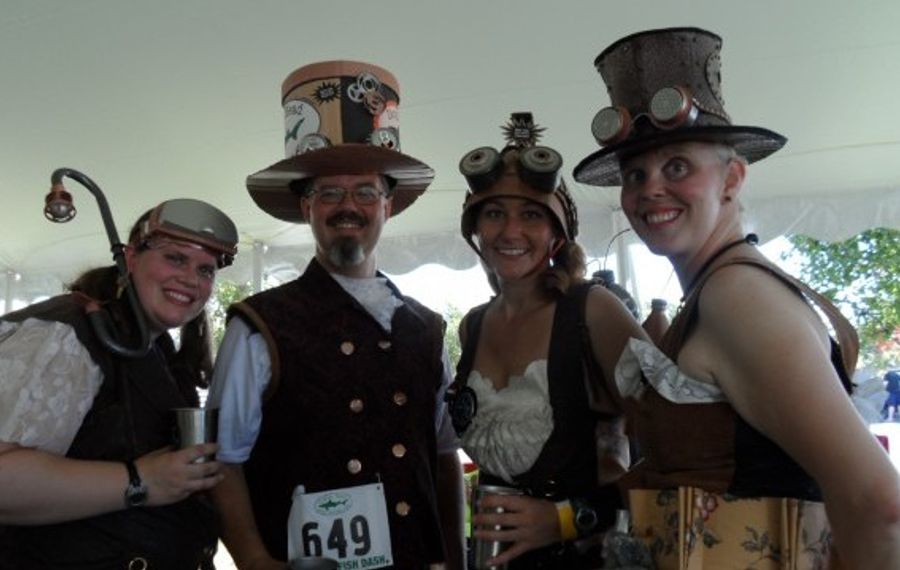 One of the best things about participating in the Dogfish Dash is that you get to pick up your T-shirt and race number in the parking lot alongside the Dogfish Head Brewings & Eats Pub in Rehoboth Beach, Del. – a landmark in the world of craft beer.

Things only get better from there.

You can drop into the brew pub for drafts that include 60- or 90-minute India Pale Ales, a Belgian-style brown ale called Raison D’Etre, or Burton Baton, an oak-aged English-style Imperial IPA.

Head about a mile east on Rehoboth Avenue, and you land on a sand-dusted boardwalk along the Atlantic Ocean.

Next morning, after running a few kilometers in Milton – home to the Dogfish Head Brewery – you’re greeted at the finish line with a water bottle for one hand and a tin cup of 60-minute IPA for the other.

It’s a great way to spend the final weekend in September, as I discovered last year – after missing out on the race the previous year by lollygagging on registration.

You see, the online dash to sign up at dogfish.com starts at noon, sharp, on April 1 –Wednesday – and this contest is a lot shorter than most race times.

The next Dash will go off on Sunday, Sept. 27. During the last nine years, the 5K and 10K races that make up the event have raised more than $275,000 for the Delaware Chapter of The Nature Conservancy, the main beneficiary of the proceeds.

The race will be the same length as the Buffalo Niagara YMCA Turkey Trot: nearly 5 miles. The course in Milton, population 2,717, is more flat, moving from the brewery, on the outside of the business district, through the small downtown, along the fields on the downtown outskirts and back to the brewery. Like the Thanksgiving Day race in Buffalo, the Dash features an after party with music, healthy snacks and beer – except the race in the state of Delaware limits the beer to three cups. Still, we’re talking Dogfish Head brews here!

The party takes place on the grounds outside the brewery and bottling plant, where more than 240,000 barrels of 30 varieties of beer are produced each year. Like the brew pub 14 miles away, the brewery also offers a rotating mix of beers on tap, along with Dogfish Head T-shirts with sayings that include “Not running sucks,” and “On the job, think safety; off the job, think beer.” Ball caps, beer glasses and Dogfish four- and six-packs also are available.

The brewery digs are more Spartan than the brew pub's in Rehoboth Beach. You can grab a pint and chat over plank tables propped up on barrels.

My girlfriend, Karen, and I have the good fortune of having friends in Lewes, Del. – about halfway between the Dogfish Head brew pub and brewery. The 16-room Dogfish Inn, also in Lewes, offers a package deal for a two-night stay on Dash weekend, but already has sold out, Williams said.

No matter. As the summer season will be past, plenty of rooms should be available for the picking in Lewes, Rehoboth Beach and nearby Bethany and Dewey beaches.

Runners come mostly from the Mid-Atlantic states, followed closely by those from New England and the Southeast, Williams said. Farthest afield are runners from California.

Last fall, a quartet of alumni from the University of Maine at Machias made their third annual trek to the Dash. The four alums block off time for a noon meeting on April 1 to sign up together for the race. Like a significant percentage of other runners, they do the Dash in costume.

“We make it a beer weekend,” said Lori Brown, as she sipped beer under a canopy tent after last fall’s race with running mates Katie Archambault, Jimmy Kroon and Katherine Kulig.

Their weekend includes two nights at a hotel in Rehoboth Beach, which Kulig describes as a resort town “with a little bit of everything.”
All the kitchy retailers you’d expect from an oceanside tourist destination are present here – spots that include Dolles Salt Water Taffy, Quiet Storm Surf Shop, and Sunshine Octopus psychedelic beach clothing store.

Restaurants vary widely and include Hobos, an upscale bistro focused on sustainable seafood and vegan dishes; Obie’s by the Sea, with a middle-of-the-road menu and oceanfront view; and Fins Fish House and Raw Bar, where a small collection of Western New York natives gathers upstairs on fall Sundays to watch Bills games.

For seafood lovers, I highly recommend the décor and grub at Big Fish Grill on the Coastal Highway in Rehoboth, as well as Jerry’s Seafood, on Second Street in Lewes, which features the baseball-sized Crab Bomb, the best crab cake I’ve ever eaten, and well worth the $34 dinner cost.

The Dogfish brew pub is a fine choice, too. Several Buffalo area natives work here, including Ryan Schwamberger, the general manager, who grew up in Spencerport.

Dogfish Head Brewings & Eats serves the kind of fare you would expect to find in such a setting – fried pickle spears, pub salad and the Indulgence Burger, among others – but also twists that include IPA marinated olives; IPA battered fish and chips, with hop-pickle tatar sauce; and an Alpine Idyll pizza topped with IPA-braised mushrooms, fresh chevre, prosciutto, truffle oil, argula and a balsamic drizzle.

Along with Dogfish Head standards on tap, you also can choose from a rotating mix of limited batch beers you’ll be able to taste only here. Last week, they included Cham’Pain Domain, which blends citrusy hops, Wit Biere, local wildflower honey and orange peel at the finish, weighing in at 14 percent alcohol; and Snowblower Ale, a Belgian-style pale ale with slightly less than half that hefty kick.

But back to the race.

If any of the craft brewery owners in Western New York are reading this, how about considering a similar event in this neck of the woods, also for a noble local cause?

Meanwhile, all you avid runners with the same wish might want to keep one thing in mind, if last year’s Dogfish Dash was any indication. Race result postings were delayed because so many 10K runners bailed on the course at the halfway mark.

Who could blame them?

They knew what was waiting at the finish line.

Scott Scanlon is WNY Refresh Editor with The Buffalo News. He also writes occasionally about beer and wine.