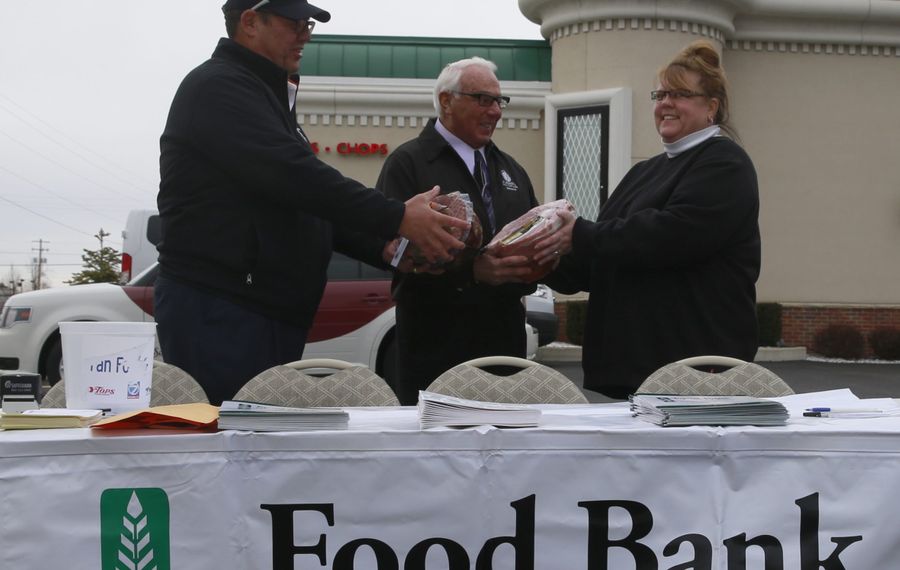 The theatrical costumes have been retired, but a revival of Ham-a-Lot was staged Tuesday outside Russ Salvatore’s restaurant and hotel in Lancaster.

Teaming up with the Food Bank of Western New York and 97 Rock, the restaurateur and philanthropist was accepting donations of hams and cash to feed needy families through Food Bank partners on Easter Sunday.

And Salvatore promised to match whatever people donated during the day, with the hams coming from Will Foods of Buffalo.

“When you give, you receive,” said Salvatore, adding that his father always told him: “The good man up above will bless you.”

Along with tending to the daily business of Russell’s Steak, Chops & More and Salvatore’s Grand Hotel, the 81-year-old Salvatore frequently found himself out in the Transit Road parking lot Tuesday, shaking the hands of donors.

“I must have put my [jacket] on and off about 20 times so far,” he said late Tuesday morning. “I didn’t think I would have to be standing out there that much. I could use an extra 20 degrees.”

“I would say by the end of the day, we should have 250, 300 hams collected,” Salvatore predicted, speaking as if he’s done it before. Which he has.

The concept of Ham-a-Lot was developed during a brainstorming session several years ago, when Salvatore met with his longtime friend Mike Billoni, marketing and public relations director of the Food Bank of Western New York, and DJ Jickster from 97 Rock. Jickster has received sustenance from Salvatore during his weeklong residency in a Food Bank truck to raise donations for “Operation: Rock Out Hunger,” a 97 Rock Thanksgiving promotion.

Salvatore came to the rescue of that Thanksgiving drive in 2013, when the biggest single donor of turkeys lost nearly $3,000 cash in a home burglary.

After hearing what happened, Salvatore pledged to make up for the stolen turkey money and donate it to the Food Bank in the donor’s name.

“It doesn’t cost that much money to be a nice guy,” Salvatore said Tuesday.

During that brainstorming session with Billoni and Jickster, Salvatore asked how he could help at another special time of year. He asked: “What could we do for Easter?” Billoni related Tuesday.

“They have retired those costumes,” Billoni said. But after a one-year hiatus, Ham-a-Lot returned Tuesday.