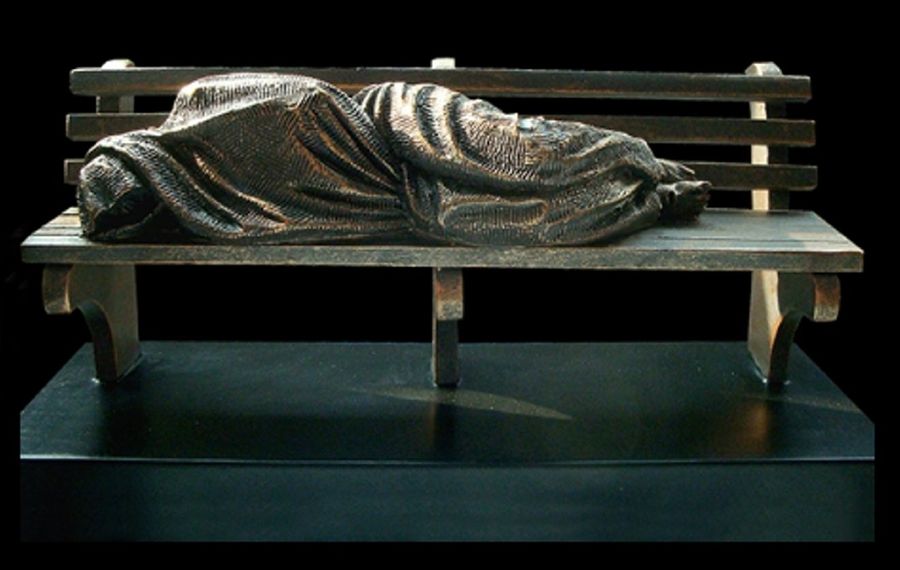 The chill wind and overcast sky provided verisimilitude Monday as a huddled figure wrapped in a thin blanket took his place on a park bench in Cathedral Park. The shape is completely draped in what almost looks like a shroud. Even the face is covered; all that is exposed is his feet, still showing the holes where they were pierced on the cross.

“Homeless Jesus,” a controversial sculpture by Canadian artist Timothy P. Schmalz, has found yet another home, this time in Buffalo. The bronze artwork will be officially unveiled downtown at 1:30 p.m. Tuesday, in the shadow of St. Paul’s Episcopal Cathedral and steps away from the busy intersection of Church and Main streets. On hand for the ceremony will be the Rt. Rev. R. William Franklin, bishop of the Episcopal Diocese of Western New York, and the Very Rev. W.H. Mebane, interim dean of the cathedral. Joining them will be other local clergy and members of the St. Paul’s congregation, who paid for the sculpture and are donating it to the city.

As workers were anchoring the sculpture Monday, Mebane related how the “Homeless Jesus” – one of more than two dozen versions of the sculpture in cities worldwide – came to be placed outside his church.

“It was my first day in Buffalo and I had just heard a story about the ‘Homeless Jesus’ on NPR,” Mebane said. “I arrived at work July 1 and my first call was from the sculptor. We spent a couple hours talking, and I was immediately inspired by it and what it represents.”

What the sculpture represents has made it popular and problematic. According to Schmalz and those who have embraced its message, the piece is a “visual translation” of the Scripture from Matthew 25: 35-40, in which Jesus says, “For I was hungry and you gave me food; I was thirsty and you gave me drink; I was a stranger and you took me in,” and so on, and when asked when this care was given, Jesus replies, “Inasmuch as you did it to one of the least of these my brethren, you did it to me.”

Schmalz and Mebane both see the irony when the words of that Gospel collide with the reality of modern life.

“One story stayed with me,” Mebane said. “The sculpture was placed outside an Episcopal church in North Carolina. A woman saw it and thought it was a real person, so she called the cops. When they realized what it was, the police asked her if she was sorry she called the cops on Jesus and she said no, that it was not representative of Jesus. She said Jesus was never homeless.”

Mebane smiles as he continues, “I guess she missed that whole part where he had to be born in a stable.”

And while the church and city leaders have shown their approval of the statue, Mebane said he expects that, once the sculpture takes its place in the park – a peaceful location that also is popular with the homeless of Buffalo – it could stir up some controversy.

“It’s not the way people want Jesus represented,” he said. “They want him triumphant.”

He added that in other cities, the sculpture has been criticized for “encouraging homelessness,” an idea he quickly dismisses.

“We want to remind people that poverty exists,” he said, “and we want to bring some comfort to the homeless.”

The church is halfway to its goal of raising $40,000, entirely through private donations, to pay for the 7-foot statue, its continued maintenance and upkeep of the surroundings.

Schmalz said this isn’t the only “Homeless Jesus” putting down roots this week. He has another that is to be installed on Friday in Dublin outside Christ Church Cathedral, donated by an Episcopalian benefactor from the United States.

“The Anglican and the Catholic bishops will be there for the blessing,” Schmalz says, which he views as a small miracle.

It is a far cry from the reception he received when leaders at St. Martin-in-the-Fields Church on Trafalgar Square in London first accepted the statue and then rejected it.

“They said that real homeless people aren’t allowed to sleep in the area, so they would be insane to accept a ‘Homeless Jesus’ sculpture,” Schmalz said.

The sculpture also has been rejected by St. Patrick’s Cathedral in Manhattan and several other large churches, but it almost always finds another location in those cities.

As a faithful Catholic, Schmalz also takes comfort in the support he has received from Pope Francis, who has seen the sculpture and approved of its depiction of Jesus. Schmalz says he is talking with the Vatican regularly about where the Rome version of “Homeless Jesus” will be placed.

For now, he couldn’t be happier about the Buffalo installation. Cathedral Park was his first choice.

“Being from Canada, I know Buffalo and I love the city,” he said. “I immediately thought St. Paul’s would be the best place, right in the center of the city. It’s an absolutely fantastic location for the piece.”