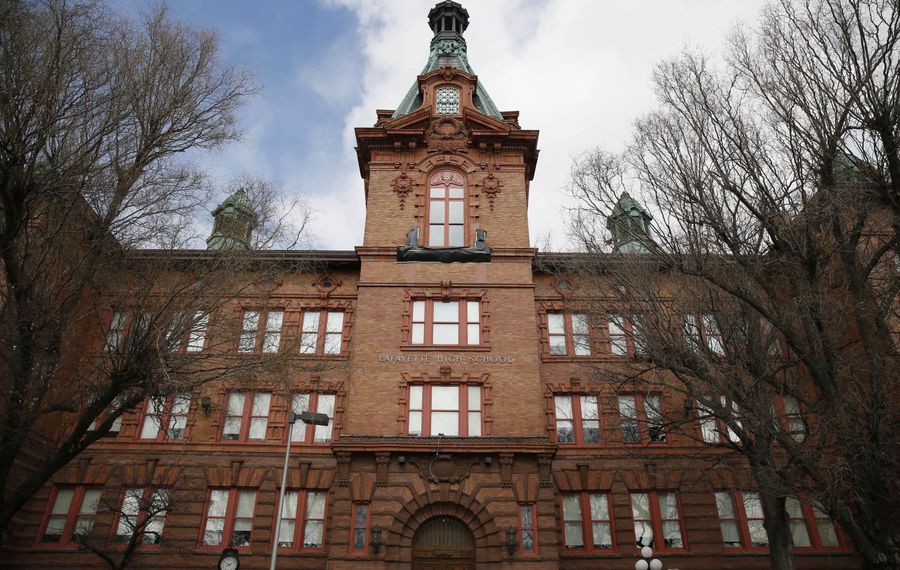 ALBANY – Lawmakers say 27 troubled schools, including four in Buffalo, will be given one year to show improvement or an outside receiver can be appointed to bring changes to the academically failing schools.

But lawmakers say the final budget deal is far less of a hammer than proposed by Gov. Andrew M. Cuomo, and includes roles for Albany, teachers, administrators, districts and parents for improving the schools.

“Done right, this could be what everyone’s asking for, which is increased attention and resources for these schools in very concentrated areas of poverty,’’ said Assemblyman Sean Ryan, a Buffalo Democrat.

Ryan said negotiators briefing lawmakers Sunday night said $75 million is being made available to the schools to do everything from paying more money to teachers for possibly longer school days to bringing in mental health counselors and other social services into the troubled schools.

It was not immediately clear which four Buffalo schools would be affected by the initiative.

Also uncertain is when the money will flow: this June for the start of the school year in September or next year. That is still under negotiation at the Capitol.

In areas of high unemployment, the program also will also bring in job training counselors to help out-of-work parents.

Ryan said the failing schools will have a “community engagement team” appointed that will work with the district to come up with benchmarks for improvement of failing schools in the first year. He said the benchmarks will be broad, and could include everything from student test scores, suspension rates and attendance levels. The state education department will have to approve the benchmarks.

If pre-determined measures are not met, then a receiver is appointed after the first year. It could be an individual, a not-for-profit agency or even another school district.

“There are checks on the receiver. It’s not designed to be a czar,’’ he said.

A host of education details in the state budget have not yet been made public. There is no bill, and there might not be one until Tuesday that would show how much money each of the state’s 700 districts will be getting in the coming year. The Senate and Assembly are engaged in an ongoing fight over money flow to suburban versus urban and upstate versus downstate districts.

The lack of a final deal was made clear by the army of lobbyists from the New York State United Teachers union that is still working the Capitol’s hallways. NYSUT President Karen Magee is also at the Capitol in a last-minute pitch to lawmakers and the Capitol press corps.

Ryan said the teacher evaluation deal, according to the briefing he has received, will allow schools to set multiple levels of performance tools to judge the classroom performance of teachers. “There are not any set percentages,’’ he said of student test scores being used in teacher evaluations, “so you could end up with a system more comprehensive and less reliant on tests than we have now.’’

Magee said the receivership proposal “has changed three times since last night.’’ She said details are still being negotiated on that and other education issues. She agreed with lawmakers that the Board of Regents and state Education Department will be developing annual teacher evaluations, though their specific authority in the overall process is not certain.

“The governor’s agenda to look at so many issues and try to bully changes in education that are not really changes that are for the best of students and our schools have been pushed back for the time being,’’ Magee told reporters at the Capitol Monday afternoon.

On other matters, Senate Majority Leader Dean Skelos this afternoon stated the obvious: that important parts of the budget are still under negotiation, including education policy and spending matters and a breakdown for spending a $5 billion surplus driven by unexpected legal settlements by the state over the past year with several financial institutions.

A source with knowledge of the talks said the true school aid increase – without add-ons outside the normal funding formula – will be closer to $1.4 billion. About $1.1 billion of that will be split between reducing the Gap Elimination Adjustment, which favors more suburban districts, and Foundation Aid, which favors lower-income and urban districts.

Skelos also defended a tax break that will be in the new budget for buyers of yachts and private planes. “The justification for that is it creates jobs,’’ he said.

Mike Murphy, a spokesman for the Senate Democrats, noted that the yacht and plane tax breaks come as Cuomo and lawmakers who run the majorities in the two houses were unable to agree on a minimum wage hike or a property relief package. “It seems like the yacht and airplane owner lobby is much more powerful than people thought,’’ he said.

The budget also will include various ethics law changes aimed mostly at legislators, including a swipe card system to be used to verify when lawmakers are in Albany and eligible for per diem payments. The toughest piece to negotiate was a provision requiring more disclosure of outside income by lawmakers who have private law practice work.

Watered down from what Cuomo originally wanted, the new deal calls for the disclosure of law client names, except in criminal and matrimonial cases or in instances where the state’s Office of Court Administration agrees with a lawmaker that release of a client’s name could especially harm lawyer-client confidentiality rules.