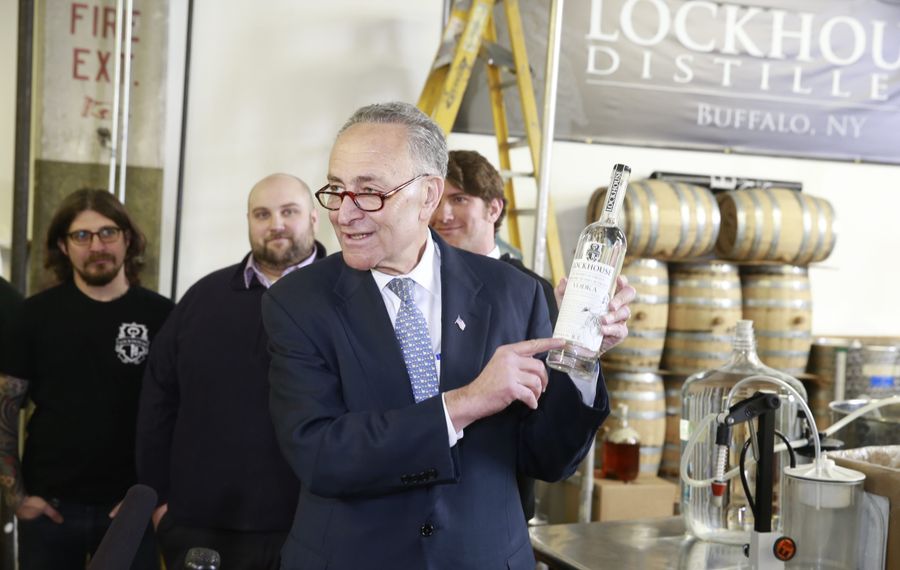 The man expected to be next Democratic leader of the U.S. Senate dropped by Buffalo on Monday not to address nuclear proliferation or crises in the Mideast, but how to gain crop insurance for malt barley.

And while Sen. Charles E. Schumer will apparently have his say on critical national issues in years ahead, he made it clear Monday that he intends to remain the same lawmaker who visits all of New York State’s 62 counties at least once a year. The Brooklyn pol, who has made upstate a focus for years, said that will not change.

“New York State is in my bones; Western New York is in my bones,” he said. “The new responsibilities – should I be fortunate enough to get them – will not diminish that a bit.”

Schumer, 64, who promised during his first statewide campaign in 1998 to visit every New York county at least once annually, has made good on the vow every year since. He said Monday that he tries to hit Western New York at least once a month and that nothing will change after last week’s revelation that he has enough votes to succeed Sen. Harry Reid of Nevada as Democratic leader of the Senate upon his retirement at the end of 2016.

A tough winter such as the last one, he pointed out, could wipe out a crop with growing demand from new craft distilleries and breweries like Lockhouse and BFLO Distilling Co. of Buffalo.

“But the lack of insurance for malt barley is preventing farmers from planting this crucial crop,” he said. “Without protections, the risk is just too high, and that is preventing our craft distilleries from really taking off.”

Lockhouse, Buffalo’s first distillery, has been producing a signature local vodka since November 2013, and is slated to begin distilling whiskey in the Cobblestone District this year. The senator noted that BFLO Distilling will begin making a signature whiskey in Larkinville this year, while pointing to new local brewers such as Old First Ward and Woodcock Brothers as “contributing to Buffalo’s economic and social revitalization.”

Schumer said New York State needs to increase its malt barley production fifteenfold to meet growing demand, prompting his call for the secretary of agriculture to extend insurance to a crop already covered in other states.

“It can be done with the flick of a pen – a signature by the secretary,” he said.

Twenty percent of all hops and 20 percent of all other ingredients, including malt barley, used by licensed “New York Farm” brewers are required to be grown or produced in New York State, Schumer explained. According to the New York State Brewers Association, while only the breweries and distilleries licensed as “farm brewery” or “farm distillery” are required by law to meet the ingredient requirements, most nonfarm craft distilleries and breweries also are increasing their sourcing from local areas, so the pressure is mounting to supply New York-grown ingredients in the coming years.

“It’s really a rage with a lot of young people,” he said, pointing to a huge market waiting for such products in New York City.

He cited Domoy Farms and CY Farms as Genesee County growers eager to expand the approximately 2,000 acres of malt barley now grown in New York State. The state already is ranked fifth nationally in craft production, he said, and could grow even more.

“The craft industries are integrally tied to the land,” Patterson said, “and if we wish to see the craft businesses of distilling, brewing and malting in New York succeed in making a truly New York State product, we first have to protect and encourage the farmers involved and make sure they are successful.”