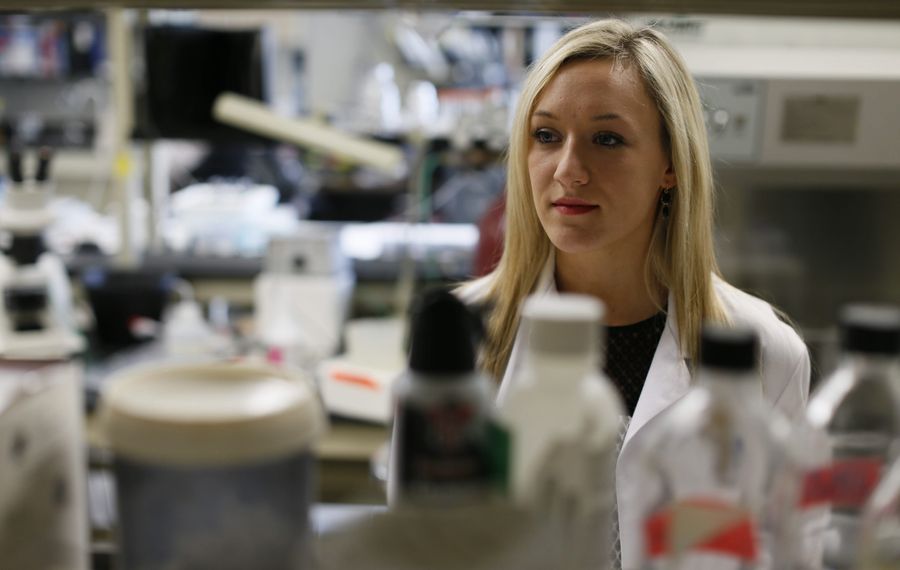 When Gina Sparacino finishes her doctor training, she’ll follow her dream to work as an orthopedic surgeon in Buffalo.

But when it comes to recruiting doctors, Buffalo can be a tough sell, so much so that the community faces a shortage of primary care doctors, as well as gastroenterologists and psychiatrists, among other specialists.

So a group of doctors here created a scholarship program to encourage University at Buffalo medical school students like Sparacino to stay put.

The Western New York Medical Scholarship Fund recently awarded Sparacino and two other medical students at least $30,000 a year for four years at UB’s School of Medicine and Biomedical Sciences.

For Sparacino, the scholarship will save her from tens of thousands of dollars of debt.

For the local medical community, each scholarship means one more doctor working in Western New York. A condition of the scholarship requires recipients to practice medicine in the region for at least five years after they complete their studies and hands-on training in a specialty.

The scholarship program represents the community’s attempt to grow its own doctors. It also underscores a problem with the number of physicians here and across the country.

When compared with 305 other regions in the United States, the Buffalo area lands near the bottom for the number of family practice physicians.

The region had 22 family practice physicians for every 100,000 residents in 2011, according to data from the Dartmouth Atlas of Health Care, which compares health statistics among regions. Only 40 other regions had a lower rate; Syracuse’s rate of 30 met the national average.

Buffalo places in the bottom half of the nation’s regions for the overall number of physicians: 192 for every 100,000 residents in 2011, Dartmouth Atlas statistics show. The national rate was 207.

Overall, Buffalo is in the bottom half of the nation’s regions in 14 specialty categories, from critical care and emergency medicine physicians to urologists.

“It’s frustrating. You have doctors making career decisions based on paying off debts rather than doing what they may want to do,” said Dr. John J. Bodkin II, a family physician at Highgate Medical Group, who founded and co-chairs the Western New York Medical Scholarship Fund. “And you have shortages. If I have a diabetic patient or someone who needs to see a dermatologist, it can take months to get them into a specialist.”

Some medical experts say the country faces a potential crisis.

The United States could be short as many as 90,000 physicians by 2025, particularly primary care doctors and surgeons who treat diseases common to the growing population of older patients, according to a new report by the American Association of Medical Colleges. The association represents medical schools and teaching hospitals that train doctors to be specialists.

The association and its supporters want the federal government, which already spends about $16 billion annually for training medical specialists, to increase spending to train at least 3,000 more doctors a year at a cost the association estimates at $1 billion a year.

“The doctor shortage is real – it’s significant – and it’s particularly serious for the kind of medical care that our aging population is going to need,” Dr. Darrell Kirch, the association’s president, said in a statement.

But other experts take a different stance.

They question the accuracy of such projections, which they say have been wrong in the past. They see a mismatch between the types of physicians the country needs and the types that medical schools and teaching hospitals produce.

Doctors choose specialties that pay more and offer stable hours. And doctors in these specialties flock to more affluent and urban areas.

Among the nation’s 306 regions, the Buffalo area placed among the top third for the number of radiologists, pediatricians, neurologists, geriatricians, neurosurgeons, pathologists and rehabilitation physicians.

The medical education system produces more physicians, but not the needed proportion of physicians who practice primary care or who treat patients in rural or other underserved areas, according to a 2014 report by the Institute of Medicine, which advises Congress and federal agencies.

Training more physicians – but without changing policies – will only exacerbate the shortages and unequal distribution, the institute concluded.

“The issue is complicated and influenced by money and politics,” said Dr. David Hughes, chief medical officer of Kaleida Health, which trains more than 400 residents each year in conjunction with UB.

Most of the cost of graduate medical education is borne by taxpayers. The bulk of public funds comes from Medicare, the federal health program for individuals 65 and older.

Congress, mainly to control spending, capped Medicare-funded residency positions as part of the 1997 Balanced Budget Act. That has limited the ability of teaching hospitals and medical schools that sponsor residency programs to increase their size.

“We need to figure out how to bring residents into team-based private practices because that’s how they are going to come away being champions for primary care. To do that, you need to change where graduate medical dollars flow,” said Dr. Kathleen Mylotte, medical director, quality and disease management, at Independent Health.

There is no quick fix. Even if the U.S. started spending significantly more tomorrow, it takes five to 10 years of training to produce a new doctor.

The Institute of Medicine has called for reforming how the government pays for doctor training in ways that target primary care. The organization also suggested expanding the use of physician assistants and advanced practice nurses and greater use of telemedicine.

A Buffalo News review of data from the Dartmouth Atlas of Health Care illustrates the tremendous variation in the doctor supply.

The Buffalo region had 66 primary care physicians per 100,000 residents as of 2011. That was the lowest rate of 10 urban regions in New York State, and much lower than the 94.6 rate in Manhattan.

Among the state’s regions, the Buffalo region had low rates in specialties like plastic and reconstructive surgery, psychiatry, cardiology, anesthesiology, gastroenterology and rheumatology.

Researchers have found that the presence of more doctors does not translate into better outcomes for patients.

The lower numbers also don’t necessarily indicate a shortage. The smaller proportion of anesthesiologists in Buffalo, for instance, could be the result of relying more on certified nurse anesthetists.

“We have a problem in this country with the way health care is delivered and organized, said Dr. David Goodman, co-director of the Dartmouth Atlas. “We should be careful about solving it by bringing more doctors into an irrational physician labor market.”

The program awards the medical school scholarships to college students who attended a Western New York high school. That increases the odds that the recipients will set down roots in their hometown.

Others contributed to an endowment fund. The goal is to raise enough money to sustain as many as 10 scholarships a year, Bodkin said.

Sparacino discovered an interest in medicine when her grandfather was hospitalized with lung cancer at Roswell Park.

The experience led her to volunteer at the cancer center and shadow a physician. After graduating from Canisius College, she took a job at Excelsior Orthopedics as a clinical scribe to help save money for medical school. She also shadowed the doctors there to see what their work life was like.

“I could see myself doing that for a long time,” Sparacino said.