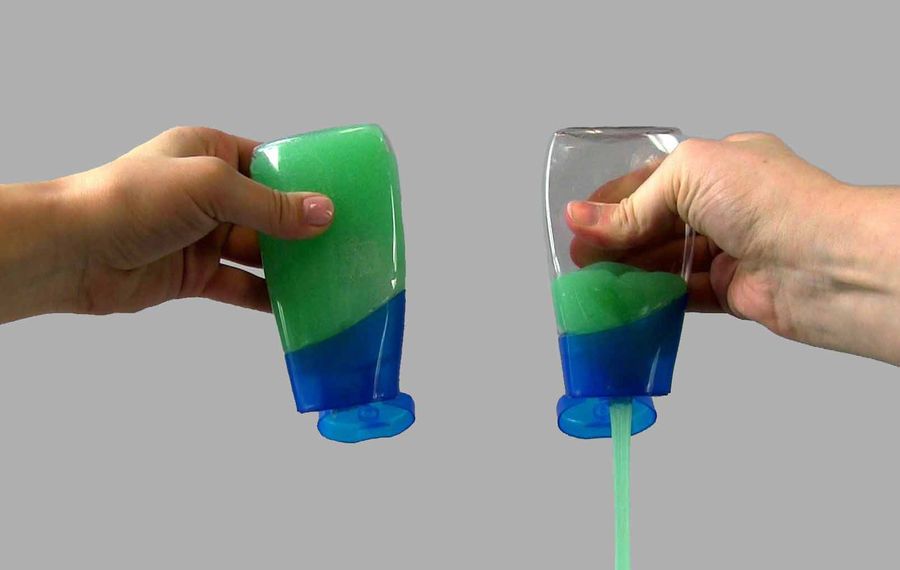 CAMBRIDGE, Mass. – If a glue did not stick to the inside of the tube or bottle, you might think it must not be a very good glue.

On the other hand, clinging glue has annoyed parents and children attempting to scoop out the remaining bits with their fingers.

This is one of life’s little problems. LiquiGlide, a company started by a professor at the Massachusetts Institute of Technology and one of his graduate students, has come up with a solution for it: a coating that makes the inside of the bottle permanently wet and slippery. The glue quickly slides to the nozzle or back down to the bottom.

The company announced on Monday that Elmer’s Products had signed an exclusive licensing agreement for the use of such coatings in glue containers. LiquiGlide has also licensed its technology to a packaging company in Australia. The idea there is to make the inside surface of paint can lids slippery so paint slides back into the can instead of sticking to the lid and drying. The dried bits fall into the paint, leading to bumpy walls and clogged painting equipment.

The technology could also have major environmental payoffs by reducing waste. In a few years, “we expect it to be ubiquitous,” said J. David Smith, the graduate student turned chief executive of LiquiGlide.

Tests by Consumer Reports in 2009 found that much of what we buy never makes it out of the container – up to a quarter of skin lotion, 16 percent of laundry detergent and 15 percent of condiments like ketchup.

“It’s pretty crazy, getting mayonnaise out,” said Kripa K. Varanasi, a professor of mechanical engineering at MIT and co-founder of LiquiGlide.

Mayonnaise and toothpaste are what scientists call Bingham plastics. A Bingham plastic, named after Eugene Bingham, a chemist who described the mathematical properties, is not made of plastic; the term describes a highly viscous material that does not flow without a strong push.

How to make a slippery surface has been an interest for many scientists and engineers with many potential uses.

When water or other liquids flow through a pipe, the layer of liquid next to the pipe wall typically sticks. Farther from the pipe wall, the liquid flows, fastest at the center. “Different layers of water are sliding past one another, and therefore there is friction, which is viscosity, and that is why you need to pump it,” said Neelesh A. Patankar, a professor of mechanical engineering at Northwestern University.

The trick is to find a way around the no-slip boundary condition. “What people have tried to do is, can we have something between the solid surface and the liquid which will help the liquid slide?” Patankar said.

One example is a droplet of water skittering across a hot pan. The droplet is riding on a layer of steam like a hovercraft, not touching the pan.

That technology has had some success. Rust-Oleum, for example, sells a superhydrophobic treatment developed by a company called NeverWet in Lancaster, Pa. But the microscopic roughness can be damaged, and then water flows in, displacing the pockets of air, and sticks to the no-longer-slippery surface. Patankar and his colleagues have shown that with a clever choice of texture, trapped water vapor could serve as the persistent layer separating the water from the surface.

“We’re not defying physics, but effectively, we are,” Smith said.