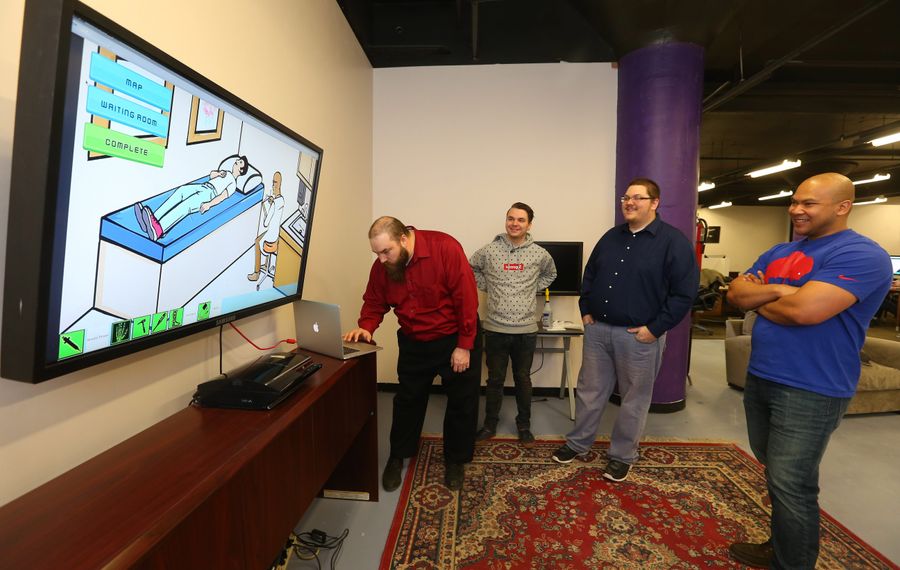 A night as a triage nurse could be interesting. Or maybe a shift as a hotel manager or a computer programmer. Learn a few basic skills, then give it a try. Get the job done right, and you might be rewarded with a trip to Canalside to enjoy a game of virtual curling, or view a photo exhibit of historic Buffalo.

Having fun? Maybe try another job.

This virtual careerfest designed by Bill Stewart and Dan Griggs is the current front-runner in the City of Buffalo’s “Serious Computer Game Design” competition.

“We made a cartoon approach,” said Stewart. “It’s essentially an introduction to different careers in the city of Buffalo. We want to show what a career entails in a fun way so city youth may think: ‘I’m having fun. Maybe this is something I’d like to do.’ ”

The top three teams from the first round of competition earlier this month are now working on turning their design plans into an actual game as these computer whizzes prepare for the finals in late April. The winner of the final round gets a $5,000 prize and their game could end up on a city website or, if it’s good enough, perhaps be promoted for marketing as a commercial video game.

Stewart, 40, and Griggs, 31 – both software programmers who have their own gaming company, Libram Games – took first place in the initial round.

Pick breakfast and forego the shower, and there won’t be any negative consequence. But pick the shower over breakfast, and you go to school hungry.

Ultimately, making the right choices in the game hones the skills needed for a good job.

Placing third in the first round of competition was the Cleaver Apps team, consisting of Antonio Feagin and Benjamin Van Cleave, both Niagara County Community College students majoring in accounting. In their game, called Buffcity, gamers click on buildings in Buffalo and learn about them from the mayor. Gamers are then brought to City Hall, asked questions about what they learned, then start on their own career paths, with tasks along the way.

“You learn about the city, increase your productivity and become a better community member,” said Van Cleave, 19.

The gaming challenge is aimed at educating Buffalo youth on such things as career choices, the importance of diversity, and skills development. It also aims to support the local computer game-development industry and encourage young women and minorities to pursue the STEM fields – science, technology, engineering and math – including computer game development, according to Mayor Byron W. Brown.

While Stewart’s and Griggs’s Libram Games team won the first round of the competition, their careerfest game wasn’t their initial idea for the contest.

Their first plan was more elaborate. But after weeks of working on that idea, Stewart said, it was scrapped after, in the final days leading up to the first round, the city revised the contest ownership statement.

Initially, the city’s announcement said game creators “retain all rights and ownership” but grant an unlimited license to the city. The revised announcement said all game submissions “become the property of the City of Buffalo.”

“We had a much larger concept, my partner and I,” Stewart said. “As we started to put together the full scope, we started to think this could be marketable. When the city changed the license to say the city would have full ownership, I said ‘I don’t want to give up full ownership. Let’s come up with another idea.’ ”

Brown downplayed the revision regarding ownership rights, calling it a clarification that is about controlling content, not potential profits.

“We want to help shape and develop the game. We want to protect the integrity of it. We want the product we are looking for to teach life skills, diversity and be fun,” the mayor said.

If a game submitted for the contest does get developed and marketed, the city, Brown said, would split any profits with the game creator. The city’s share, he said, would go to support youth programs in Buffalo.

Stewart said it’s not unusual for game sponsors to claim all rights to a game, but that it is unusual for rules to change after being announced, as occurred here. Designers typically create a different game if they know they are retaining rights, often putting in more effort, he said.

Stewart attributed the last-minute revision to the city’s inexperience with these types of games. In the end, he said, he’s happy with the way things worked out. He’s glad his team is participating in a contest that promotes the city of Buffalo as well as video gaming.

He and his partner will soon get back to work on their originalidea, as well. If it works out as well as they hope, he said, they will attempt to market that game through their own company.