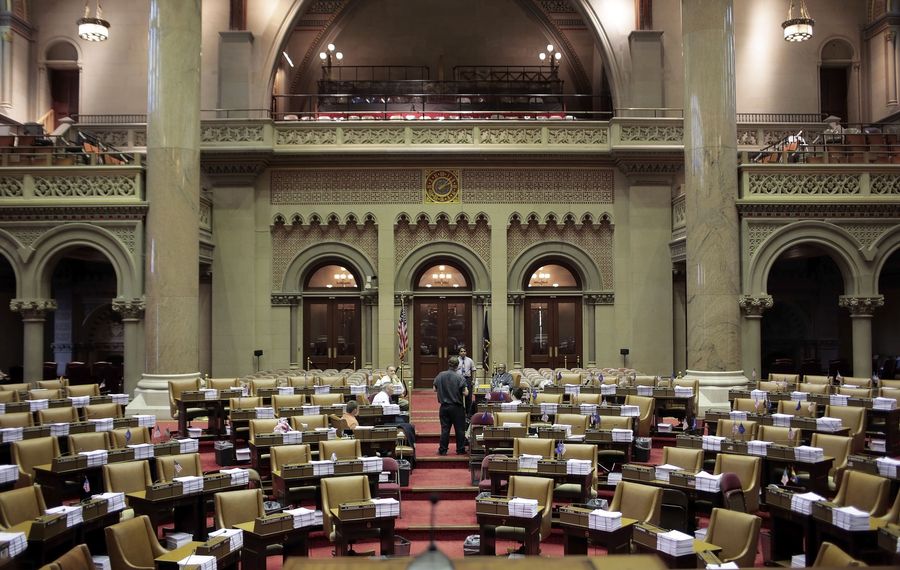 ALBANY – The state’s budget will pump $1.6 billion more into the state’s public school districts under an agreement in principle, but the sides were still arguing Sunday night over which districts will emerge as the ultimate winners and near-winners in the rush for new state funding.

The Governor’s Office confirmed late Sunday that an agreement had been reached on a budget for the state’s 2015-16 fiscal year that begins Wednesday.

The governor said that spending would increase by less than 2 percent from the current budget for the fifth consecutive year.

The announcement was issued jointly by Cuomo, Senate Majority Leader Dean G. Skelos, R-Rockville Centre, and Assembly Speaker Carl E. Heastie, D-Bronx. The governor said, “This is a budget that all New Yorkers can be proud of. I commend Speaker Heastie and Majority Leader Skelos and their colleagues in the Legislature for their hard work and leadership on reaching this agreement.”

The contentious issue of how to toughen job-performance evaluations of classroom teachers, according to Heastie, will largely be left for the state Education Department to determine. The Cuomo administration early Monday morning, via email, disputed Heastie’s claims. Assembly officials Monday morning said the state Education department will be issuing the regulations for new teacher evaluations, giving the agency an important role in the process. Full details are expected today if the budget’s education bill is released.

The state will also start a new program to address failing schools, such as four schools in Buffalo, but will not be as aggressive as Cuomo sought, providing more of a lifeline than a death sentence to the troubled schools. Precise details will emerge Monday.

State funding to schools will reach $23.5 billion with the aid increase approved Sunday.

The ethics deal is not anywhere near what watchdog groups say is needed to bolster Albany’s tattered image; it focuses on provisions such as requiring disclosure of clients’ names by legislators with law firm businesses. The deal, though, allows either of two state agencies to provide exemptions for a host of reasons, including keeping client information secret if disclosing the name of a client would amount to an “invasion of personal privacy” or if “undue harm” would be done to lawyer-client confidentiality.

While the issue of dividing school aid funding among the districts was unresolved Sunday night, it did not stop Cuomo and legislative leaders from announcing a “framework” budget deal in a brief written statement that would only promise details Monday.

Many of the details, though, had been provided earlier Sunday. Gone from the talks are plans to increase the minimum wage and provide state-funded college grants for children of undocumented immigrants.

The state’s brownfield program, partly responsible for development of a number of abandoned properties in the Buffalo area, will be extended another 10 years, with upstate projects facing fewer qualification hurdles than downstate.

Budget negotiators have also agreed to keep the state’s Superfund program alive another 10 years, and vowed to fund it with $1 billion, including $100 million in the coming year to clean up toxic sites.

The deals were among those trickling out as Cuomo and lawmakers again tried to resolve differences that in the last week had kept them from reaching a budget deal.

Final talks were being held on thorny issues. But in a sign that negotiations were wrapping up, the Assembly and the Senate were fully engaged in their annual dance over how to divvy up state aid to the school districts. The $1.6 billion school funding increase includes so-called expense-based aid. The main, formula-driven portion of the aid hike will total about $1.3 billion – more than what Cuomo proposed but much below what schools say is needed to make up for the residual impact of cuts during the recession. At issue is a simple and old one: Senate Republicans want to drive relatively more funding to suburban districts, while Assembly Democrats are seeking big boosts in aid to lower-income districts.

The state’s brownfield program has been used to clean up about 200 properties across the state. But the program, while heavily used in Erie County, has been abused, the governor and other critics say, especially in New York City, where developers have used lucrative tax breaks for projects in upscale areas that would have been done without the tax incentives.

To end those abuses, according to an official involved in the talks who spoke on condition of anonymity, the revised brownfield program will contain a two-tier set of rules: stricter ones for New York City projects and less burdensome hurdles for those outside that city. “We wanted to make sure this is really an upstate redevelopment tool,” said a Cuomo administration official.

The abuses were heavily centered on tax breaks given for preparing contaminated sites. For example, a developer would excavate 10 feet below grade, but only 5 feet of that earth was considered contaminated; the entire 10 feet would be taken as a tax break. Now, for New York City projects, only the dirty 5 feet of earth excavated will be covered, with the remaining excavation being eligible for a separate re-development tax credit that is worth far less. For New York City projects, the state is also raising the bar for what kinds of projects can qualify, a provision seen as unworkable in the less profitable upstate market.

There are also extra credits available for projects that locate in pre-approved brownfield opportunity areas – there are several in the Buffalo area – or locate manufacturing on a site. Additionally, those already participating in the program, who could have been kicked out under a previous Cuomo plan, will be able to remain and qualify for the tax breaks.

Cuomo administration officials could not say how much the changes might save for the state, but said the program is now being retuned into its original purpose: to focus on taking dirty, abandoned upstate sites and redevelop them for new uses.

In other areas of the budget, lawmakers restored funding Cuomo cut from the State University of New York’s operating budget, and restored $18 million to programs designed to help lower-income residents afford college.

Community colleges were pumped up by lawmakers, who have provided a $13.75 million increase to the SUNY-based community colleges, up $100 per full-time student to $2,597.

The Legislature also approved Sunday a $90 million “sweep” of funds from the off-budget New York Power Authority into the state’s general fund. Money will be used to fund Cuomo’s Start-Up NY program that provides tax-free zones for companies and their employees for 10 years if they located in a special area of the state. Cuomo this year wants to expand it to an area around two downstate airports: Republic on Long Island and Stewart in Orange County.

In the still-emerging budget legislation, lawmakers also will:

• Reject Cuomo’s plan to cut $2.1 million in revenue sharing to communities that host racetrack-based casinos, such as Hamburg.

• Direct a state energy agency to come up with ways to help lower-income New Yorkers better afford energy-efficient systems for their homes.

Assembly Democrats on Sunday night were meeting in private on the budget’s details. Senators are due back in town Monday to start passing major portions of the budget, along with the Assembly.