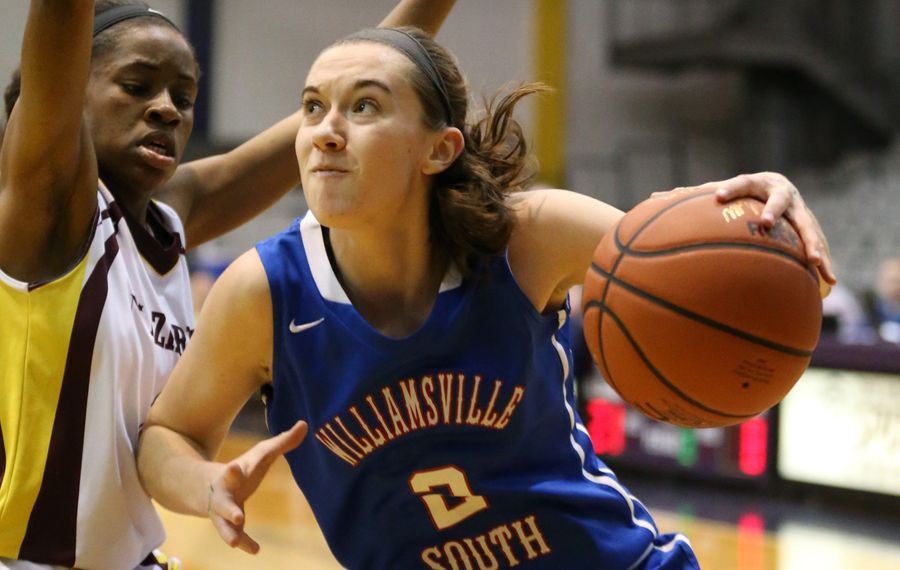 ALBANY – One way or another, the run was going to end for Williamsville South’s girls’ basketball team Sunday.

The Federation Tournament of Basketball Champions final was the last game on the docket for the Billies during their championship season. It was one more chance for folks to see seniors Grace Licata, Emily Smith and Erin Egan in action and bid them farewell, and it was a final chance for teammates to compete with them.

It would have been nice to end the season with a 26-game winning streak and become the second straight Western New York team to win the girls Federation Class A crown. Pesky Nazareth of Brooklyn had other ideas.

Williamsville South’s quest to become a double champion ended at the hands of the Lady Kingsmen (11-19) as the state Catholic High School Association champion pulled away from South, 64-54, before 200 spectators at the University at Albany’s SEFCU Arena.

ErkyahRussell grabbed a game-high 12 rebounds and poured in 17 points to lead three Nazareth players in double figures. Niya Johnson added 14 points and Shalix Hines added 13 as the Kingsmen’s ability to change defenses and utilize quick ball movement on offense proved to be too much for Williamsville South (25-2), which had its 25-game winning streak come to an end.

“They were a very talented team,” said Egan, who had 12 points and nine rebounds. “They played a fast game. They took a lot of the things we do away but we stuck together as a team.”

South trailed early, 10-2 and 21-8, but slowly chipped away and took a 31-29 lead after Egan’s traditional three-point play. After exchanging leads a couple of times, Nazareth took the lead for good on a layup by Russell late in the third quarter. South tied it at 44 on Smith’s three-pointer with 5:30 left, then misfired on its next two trips down court.

Instead Nazareth, which played against bigger-sized Catholic schools during the regular season before league rules determined it would compete in the postseason as a Class A-sized school, closed the season on a six-game winning streak.

“Our regular season was dismal,” said Kingsmen coach Ron Kelly. “For us to bounce back and fight for that championship is incredible.”

It would’ve been incredible for South to cap its historic season with the Federation championship, but the Billies didn’t return home losers.

“They can’t take the state championship away from us,” coach Kristen Dolan said. “This stings but for the youngsters it’s now something to look forward to and we’ll work hard to get back to this point.”

Brianna Neeley, who led South with 18 points and 10 rebounds, wasn’t crying after the game because her team fell short. The junior was in tears because she’d never represent South on the hardwood with Licata, Smith or good friend Egan.

“Our chemistry was so great on and off the court,” Neeley said. “It’s so sad it’s going to end.”