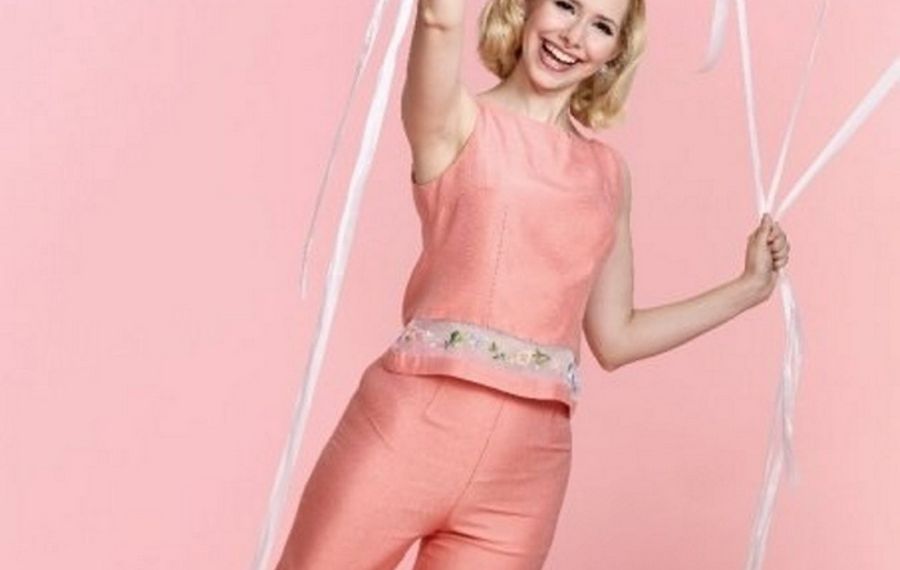 Nellie McKay, “My Weekly Reader” (429 Records). Nellie McKay’s virtuosity is matched only by her wackiness. Though she’s more talented than a room full of the female modern pop singers and songwriters who might be considered her peer group, she doesn’t really sell too many records or bother the pop charts. McKay’s motives for record-making have always seemed to be personal, rather than driven by trends or dictated by the market. So if she releases a completely eclectic collection of “cover songs,” produced lovingly and inventively by Geoff Emerick – who was the right-hand man of Sir George Martin during the creation of a few albums by some obscure band known as the Beatles – it’s not likely such a move was made with visions of McKay becoming Diana Krall or Lady Gaga. Her picks avoid Great American Songbook war horses, instead favoring the eclectic pop visions of writers like Ray Davies of the Kinks, (“Sunny Afternoon”); Moby Grape, (“Murder in My Heart for the Judge”); Paul Simon, (“Red Rubber Ball”); Crosby Stills & Nash, (“Wooden Ships”); the Small Faces, (“Itchycoo Park”); Lennon & McCartney, (“If I Fell”) and Frank Zappa (“Hungry Freaks, Daddy”). Her takes on these tunes are at once respectful and irreverent, as if McKay’s desire was to capture the spirit of the original recordings, rather than replicate them. Her assortment of keyboards and marimbas ably frames the sultry-but-playful singing throughout, and special guests – Bela Fleck on banjo for the Moby Grape number, Dweezil Zappa’s guitar during his father’s “Hungry Freaks, Daddy” – bring a dish to pass at the gorgeously produced sonic feast. But the star of this show is McKay’s blissfully untethered imagination, which takes this astutely selected tour through sunny and psychedelic pop history into the atmosphere of pure delight. McKay is a modern pop treasure.  (Jeff Miers)

The Bee Gees, “1974-1979” (Rhino/Warner Five Discs). Let’s call it the Golden Age of the Pop Music Movie Soundtrack. To be a teenager in the ’70s was to live your life to the ssoundtracks from “Grease” and “American Graffiti” and, especially, “Saturday Night Fever” whose Bee Gees’ soundtrack spent 24 weeks at No. 1 and clocked in at 15 million copies domestically in its era of pop hegemony. If it weren’t for that stunning, ear-rocking benevolent takeover of the American ear (six No. 1 hits in a row; take that Lennon and McCartney), the Bee Gees might have spent the era artfully searching for an identity. The falsettos and harmonies of the Brothers Gibb were a given – sort of ultra-slick Beatles-era Aussie Brothers of the Beach Boys and updates of the sublime Ink Spots music of the ’40s. The outrageous stylization of their music always exempted it from the howling mockery it might otherwise have seemed to beg for. There was no one remotely like them and their California brothers The Beach Boys in their era. Even if you think you’re familiar to the point of boredom with the Bee Gees, forget it. This five-disc set begins with their, yes, 12th LP, “Mr. Natural,” and heard now it is absolutely fresh. Their giant hit “Jive Talking” hit the world on their next album, “Main Course,” which, as the ostentatious commercialists used to say, “charted” for 74 weeks and went double platinum. And then came “Children of the World,” “Spirits Having Flown” and the “Saturday Night Fever” music that is heard here along with a plenitude of B-sides, alternates and splendid what-not on a bonus fifth disc called “The Miami Years.” The beauty of a box set like this one is the ability to hear some music anew and that happens splendidly all through this. With all of that, though, there should have been an ample booklet of notes to tell us exactly what we’re listening to on every track. The absence of that from this box, to be annoyingly frank, subtracted an entire star from the accompanying star rating.  (Jeff Simon)

Zemlinsky, Die Seejungfrau (The Mermaid) Sinfonietta, Op. 23, The Helsinki Philharmonic Orchestra, John Storgärds, conductor (Ondine). The sweet sounds of Alexander von Zemlinsky’s “The Mermaid” are all the sweeter to Buffalonians who remember that this was the showpiece that the Buffalo Philharmonic Orchestra played for its Carnegie Hall triumph in 2004. A showpiece it is, full of romantic delirium and colorful orchestration. The Helsinki Philharmonic emphasizes that it is performing the world premiere of the new critical version, but the differences are slight between that and what the BPO played at Carnegie Hall. What I do find fascinating is the sleuthwork, detailed in the fine print of the liner notes. Zemlinsky is lucky to have such champions, who often face insurmountable obstacles. (In one instance, two manuscript pages are gummed firmly together, preventing scholars from seeing how he might have negotiated an off-stage hornpipe, now lost forever.) The Sinfonietta has some of the same color but he wrote it later and it has none of the romanticism of “The Mermaid.” Influenced by Schoenberg, it’s not as good of a piece, and it’s tougher going. Still, when Zemlinsky is good, he is very good. I am glad he is no stranger to us. The BPO’s performance of “The Mermaid,” by the way, is available on a CD on Beau Fleuve, the orchestra’s private label.  (Mary Kunz Goldman)

Busoni, Volume Three of complete works, “The Visionary” performed by pianist Jeni Slotchiver (Centaur). Busoni knew his place better than anyone else in his lifetime. The great piano virtuoso and brilliant proto-modernist said in 1922, “My style takes everyone aback: too young for the old, insufficiently mindless for the young, it constitutes a clear-cut chapter in the disorder of our times. Inasmuch, it will hold its own better than subsequently fluctuating later generations.” Centaur’s project of bringing to us Busoni’s complete piano music hereby hits the motherlode of Busoni’s forward-thinking ambitions. Here is the music where the late-Romantic and the early-modernist are almost identical, just as they are in some of the later music of Busoni’s future-haunted pianistic brother under the skin, Alexander Scriabin. It is no accident that, with Liszt as their common ancestor, a couple of the most famous piano virtuosos of their time also were a couple of the most profound premodernist musical thinkers. As early as 1907, Busoni was publishing the “Outline for a New Aesthetic of Music” which called for freedom from the “shackles of law-givers.” He envisioned an art “old and new at the same time” and that’s what you’ll hear on this disc of wonderful piano music. It is music akin on one side to Chopin and Liszt and on the other Bartok and Schoenberg. “Only he is happy who looks to the future” was Busoni’s credo. You can hear it in his “Toccata” from 1921. “Fantasia Nach Johan Sebastian Bach” from 1909 is a kind of obituary for his father written in three days. “I have my father to thank for my good fortune, because during my childhood he insisted on my studying Bach at a time and in a country that did not rank the master much higher than a Carl Czerny.” Jeni Slotchiver’s pianism here is not of the imposing firepower Busoni’s was in his time but what it lacks in presenting virtuosity it gains in achieving clarity for a composer always in line for upward revision. ½ (Jeff Simon)

Eliane Elias, “Made in Brazil” (Concord). The wisdom here might belong to the late Eydie Gorme: “Blame it on the bossa nova.” No one ever said that the pop music of Brazil was anything but lovely. Nor is there anything wrong with the musicianship of Eliane Elias, who functions here as singer, pianist, composer and lyricist and all-around majordomo (no small thing when the disc includes large string arrangements involving members of the London Symphony.) A couple of her solos are impressive here. But at this stage of musical history, with so many classic Bossa Nova and Brazilian music discs available, there is almost no getting around the monotony of the bossa nova over the course of a whole new disc. The days of the music’s “magic spell” are over. With such incredible past practitioners of the music as Jobim, Gilberto, Stan Getz, Ivan Lins and Milton Nascimento so exhaustively recorded, almost any new disc of Brazilian music would find it virtually impossible to evade the suspicion of redundancy, no matter how many originals the lead musician sings (as well as a couple of Jobim classics.) Give Elias credit for guest stars, though, including Take 6, her daughter (with trumpet player Randy Brecker) Amanda Brecker, and Brazilians Ed Motta and Roberto Menescal. ½ (Jeff Simon)

Kevin Eubanks and Stanley Jordan, “Duets” (Mack Avenue). Music unheard, this was slotted to be one of the most eagerly awaited jazz discs of 2015. These are two of the great living jazz guitarists – very different in approach to be sure but nothing if not compatible. And too, Eubanks’ 18 years in Jay Leno’s nightly “Tonight Show” band accustomed him to playing just about every style of jazz and pop guitar that might be necessary. “We’ve known each other since the early ’80s,” said Eubanks. “Since then we’d see each other mostly on festival stages.” Jordan pays tribute to Eubanks’ “unconventional finger style technique. I could relate to that. We were going for something different and I never viewed him as a competitor.” This is a beautiful record by any reckoning – a gentle disc of duets recorded in Eubanks’ state-of-the-art facility, a place, we’re told, where his basement used to be (shades of Keith Jarrett). Both also play piano on the disc, a fairly major departure for Eubanks considering that his uncle was the great jazz pianist Ray Bryant. He plays Thad Jones’ “A Child is Born on Piano.” Eubanks also plays bass on a couple of tracks – “Nature Boy” with Jordan and “Summertime” in overdub with himself on acoustic guitar. Jordan’s self-assessment of the disc is pretty much spot-on. “I just love the feel of it – it has a real sweetness. People who listen from their heart are going to love this record as an antidote to the norm.” In other words, the next step up from Earl Klugh – or a duet guitar version of Jarret’s “The Melody Alone At Night With You.” And no surprise, some of the playing on it – especially by Eubanks – is spectacular. ½ (Jeff Simon)