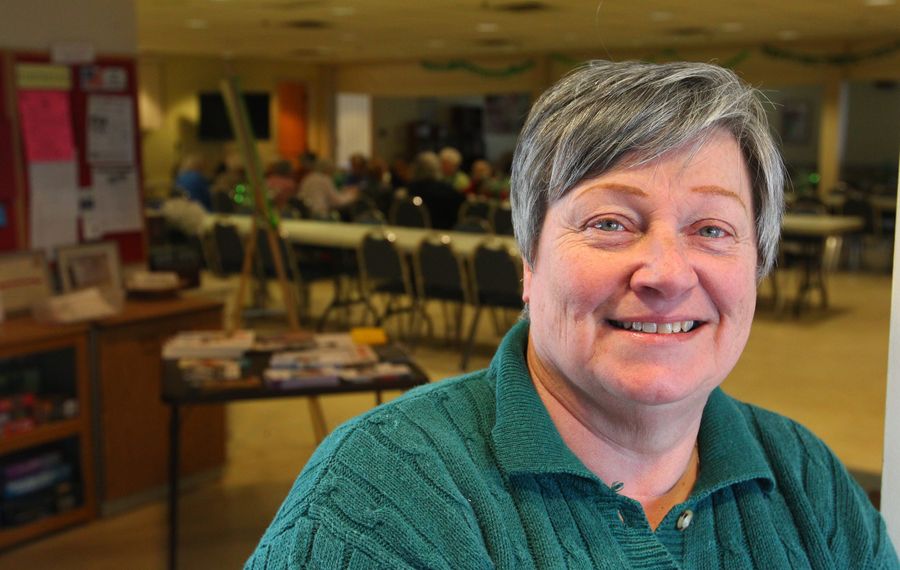 LEWISTON –There is always a person in a community who can be counted on volunteer time and take charge when needed. People like Paulette Glasgow.

Glasgow, well-known for her take-charge, can-do attitude, will be honored on May 15 as the Town of Lewiston Person of the Year by the Niagara River Region Chamber of Commerce.

“I wanted to be a brain surgeon, but I found there was blood involved,” Glasgow said. Instead she followed her second love and has a degree in politics and American history from SUNY Brockport. She said she really got interested in politics following an internship to study and live in Washington, D.C., while she was in college.

Glasgow, who is 65, was born in New Jersey and came to the Lewiston area with her family in 1958, when she was 8 years old. Her stepfather worked as a crane operator building the Niagara Power Project. She is a graduate of Niagara Falls High School.

She was elected to the Lewiston Town Board, serving from 1993 to 1997, but said she won’t run again. Instead she remains behind the scenes as a vocal community activist, attending every Lewiston Town Board meeting – with the exceptions of during illnesses in her family – since she left the board in 1997.

She also is active as a board member of the Lewiston Senior Club, a member of the Historical Association of Lewiston and the Sanborn Historical Society, helping to establish the Sanborn Farm Museum. She also has been on the Niagara County Planning Board, used to be a teacher’s aide in the Lewiston-Porter School District and delivered Meals on Wheels. She also calls herself a proud Hibernian and officer for the Niagara County International Order of Hibernians. She also is an officer in the Friends of the Lewiston Library.

Glasgow and her husband, George, a native of Lewiston, have been married for 34 years. He and Pete Bicknell own a race car parts supply warehouse in Niagara Falls.

I imagine the Lewiston area is very important to you.

Oh, yes, most definitely. Even growing up in Niagara Falls our stepfather would take us on the proverbial Sunday afternoon ride in the country and we always ended up in Lewiston. In Sanborn, on Route 31, there was an ice cream stand and we always stopped there and got ice cream.

Have you seen the community change?

Is that a good thing?

Why did you run for office?

I had been involved with the seniors. I was on the senior advisory board and delivered Meals on Wheels. I would go into Town Hall and run into (former Highway Superintendant) Fran Maher and Chuck Stojak and they really pursued me. At that time I was a registered Democrat and Fran told me to change my party and run for office. It was them persuading me and an incident at the time involving the waste water treatment plant. Town Board members at that time fired everybody. I didn’t think that was right.

Were you involved with other community groups?

I got involved with the Sanborn Historical Society. They were just organizing. I got involved with them and got appointed to the board and was the vice president for many years. We had this idea in the back of our minds about building a farm museum. There was land available there and we pursued and like they say, the rest is history.

I assume you are pretty proud of what has been done with the Sanborn Farm Museum on Saunders Settlement Road.

I am very proud of the Farm Museum – extremely.

What did you try to do there?

Our whole purpose was to expand the agricultural aspect of Lewiston, which is quite deep. Also that was a century-old farm and we wanted to save it.

Oh, yes. There was a $50,000 grant for a strategic plan and the Town Board at that time wanted to use the money to build a golf course at Joseph Davis State Park. I felt that would be better served if we used that as a strategic plan to bring in historians. They do a business plan for your for five years. We were able to wrestle that $50,000 and hired Heberling and Associates. They came in and did a strategic plan. What you are seeing now is the blueprint, with a little tinkering, of what they laid out.

What did they show you?

You live in the Town of Lewiston, not in Sanborn. Why have you done so much work in Sanborn?

I don’t know. I guess when I was little we always ended up in Sanborn at that ice cream place. Maybe I’m a homing pigeon.

There is always talk of Sanborn, a hamlet in the town, getting ignored.

I think that was one of the catalysts. I have a lot of friends who lived in Sanborn and that rubbed them the wrong way. They felt like the lost orphan. Nobody knew they were part of Lewiston.

You are a regular at Lewiston Town Board meetings and you are always outspoken. Why are you so involved?

It’s my background in politics. I believe if you are going to be involved, you have to know what’s going on in your community. I think things need to be put on the record and sometimes people (on the board) screw up. If I have the knowledge, I want to give them that knowledge.

Did you ever want to pursue higher offices?

No, absolutely not. I wanted to be a lawyer. I think that’s what encouraged me to become certified as a paralegal. I do a lot of pro bono work for seniors. When the Friends of the Lewiston Library wanted to become incorporated many years ago, I volunteered my services to them and they became a 501(c)3. Years ago the Sanborn Business Association wanted to be formed and I helped them form that.

Are you surprised you were chosen for Lewiston Citizen of the Year?

For the first time I was lost for words. I started to cry. I don’t do things to be patted on the back. I just do things because they are needed. My philosophy is if somebody needs help – I do. I just step right in – I do. For someone to say, “Paulette, we appreciate what you did,” took my breath away.

Glasgow and other individuals and community groups will be recognized by the Niagara River Region Chamber of Commerce at its 10th annual anniversary gala on May 15 in the Niagara Falls County Club in Lewiston. The event is open to the public and tickets are available by calling 754-9500.