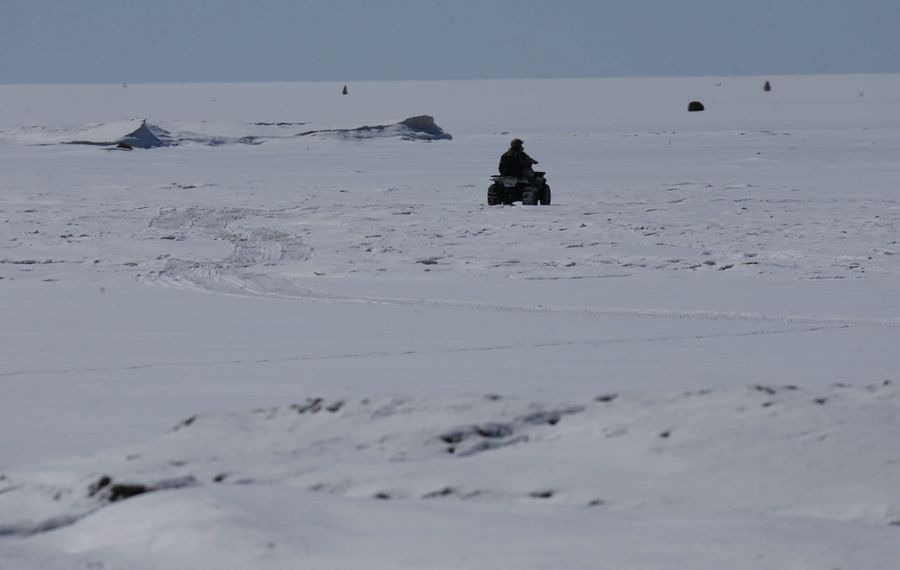 The large ice cap still encrusting most of Lake Erie would cover all of Long Island, Connecticut and Rhode Island combined.

It’s two feet thick in many places, and melting oh-so-slowly. Last year, it wasn’t completely gone until May.

The lake ice is the biggest, whitest sign that spring’s arrival is again delayed. And the temperature is not going to warm up any time soon.

This will be the longest it has taken to reach 60 degrees since 1980.

Farmers have crops to plant. Boaters want to get into the water. There are fish to stock, buildings to fix and driveways to repair.

All of this is delayed.

“As soon as they can, they’ll get out there,” said Rich Davenport, a North Tonawanda fisherman of his fellow anglers. “Some will dodge icebergs. I’m not one of them.”

A later-than-usual spring also means the ice boom will stay in longer again this year.

The boom, a fixture in the Buffalo harbor since 1964, is removed by April 1 under order of the International Joint Commission, but can be delayed if more than 250 square miles of ice remains in the eastern end of the lake. That’s an area about half the size of Niagara County.

“We’ll be waiting for the 250 square miles of ice,” Lou Paonessa, a spokesman for the New York Power Authority, said late last week.

The ice boom protects power production water intakes further downstream on the Niagara River from massive ice floes and prevents ice damming on the river, damage to shorelines and docks. It was taken out last year on April 29.

Fishing from a boat is impossible for now.

When the ice finally starts to subside, it drifts eastward toward the ice boom. That opens up waters first near Barcelona and Dunkirk.

For some boaters, the lure of the newly available lake is too much to resist.

“Last year, there were a lot of guys going out while the boom was still in place,” Davenport said.

Late season’s ice cover on the lake isn’t all bad, though.

Davenport expects some species of fish – especially walleye and yellow perch – to thrive from the extra protection of the ice.

That’s because when spawning occurs over the next three weeks or so, “kabillions” of eggs laid by females will remain protected in the calm lake water beneath the ice, and therefore can be easily fertilized by male fish, Davenport said.

“The ice cover will be a big benefit,” Davenport said. “We should see another phenomenal spawning.”

But what benefits one isn’t necessarily good for all.

Ice accumulation along Lake Erie’s shoreline deep into April can negatively affect those fish species like rainbow trout that rush up creeks to spawn.

“The closer east you get to Buffalo, all the wind piles the ice up into the creeks,” Davenport said.

When ice dams are created, the fish often can’t get through to spawn.

Further down river, late season ice also can put a wrinkle in plans for charter boat captains and the lower Niagara River fishery.

The Niagara River Anglers Association help the state Department of Environmental Conservation maintain holding pens for roughly 75,000 chinook salmon and 10,000 steelhead trout at the foot of Water Street in Youngstown every April.

Last year, they couldn’t get the pens in the river until early May because of the heavy ice floes on the river, according to Paul Jackson, president of Niagara River Anglers.

“A big iceberg will do a lot of damage to the pen structure,” Jackson said.

The later the ice boom is removed from Lake Erie, the higher the chance it’s going to affect areas downstream.

“If it doesn’t come out until the third week in April,” Jackson said, “there’s going to be an ice floe on the first of May.”

And, that also means charter fishing captains have to steer clear of the hazards in lower river for a good week or two.

“Right now, they’re getting in as much fishing as they can,” Jackson said.

One thing that won’t be affected will be the Lewiston Smelt Festival. That will go off as planned – rain, snow or shine – with 400 pounds of smelt on May 1.

“We purchase what we cook,” Jackson said. “It’s commercially caught in Michigan.”

The calendar says it’s already time for farmers to plant corn and lettuce. But that’s going to have to wait.

“Every season is different,” said David Walczak, sales and operations manager for Eden Valley Growers Inc., as wet snow fell over plowed fields late last week along Route 62. “You deal with it.”

The ground in the fields was thawing out, but drowned in water and mud.

“They’ll keel,” it you put them into those conditions, Walczak explained.

“There’s still frost on the ground,” said Dan Henry, the vice president of nearby W.D. Henry & Sons growers in Eden. “That has to be thawed out and dried out.”

But if April starts looking like a dud, growers may start getting anxious. By the middle of April, cabbage, broccoli and other leafy greens should be planted.

“Hopefully, we’ll be able to catch up,” Henry said.

The Henry farm – and many other local growers – are already limping out of the gate this year.

November’s double lake-effect snowstorm destroyed the massive warehouse at the Henry farm, along with a few of its greenhouses.

“Agriculture is challenging enough as it is,” Henry said. “It just makes what we do a lot more challenging.”

Grape growers are also taking the brunt of another brutal winter.

Last year, vast percentages of wine grapes were wiped out by the bitter cold. This winter, extreme temperatures of up to 30 below zero killed off the buds in up to 60 percent of the hardier native Concord and Niagara grapes, according to Luke Haggerty, a specialist for the Lake Erie Regional Grape Program of the Cornell Cooperative Extension in Portland.

Bud loss affects grape production in the coming year. The real damage – death to the vascular tissues of the grape vines – won’t be known until later this year.

“It’s the coldest it’s been in this area for 80 years,” Haggerty said. “There’s a lot of anxiety as far as what to expect and what is coming.”

“Our biggest concern with Concords and Niagaras is they are the bread and butter of what we grow here.”

Research by Terry Bates, the director of the extension’s Lake Erie office, found a correlation exists between the amount and length of time there’s ice on Lake Erie and the calendar date when grape vines first bloom.

“If it stays cold like they’re predicting, it’ll be late and it’ll be a shorter growing season,” Bates said, not just for grapes, but fruits and vegetables too.

The owner of KJ Contracting LLC in the Town of Tonawanda is wanted across Erie, Niagara and Genesee counties by homeowners seeking to repair damage the extreme cold has wreaked on their driveways. Winter cold has cracked, pitted and heaved driveways, and Johansen has seen a lot of the damage.

“The frost was anywhere between 43 and up to 54 or 55 inches deep this year,” Johansen said. “That’s one of the deepest frosts we’ve had in a very long time.”

The frost heaves are created when moisture in the ground freezes, pushing the soil underneath toward the surface.

Some of the heaving pavement will settle back down, he said, other damage will require repair or outright replacement.

Besides consulting a professional contractor to handle the work, Johansen advises waiting until the ground fully thaws before tackling driveway jobs.

If it’s not blacktop, it’s buildings that need repair from the winter. And, the lack of warmer weather is delaying those projects, too.

Work was continuing through the snow late last week at the Henry farm to prepare for the construction of a new warehouse. Henry hopes to have the work finished by June, weather permitting.

Meanwhile, in East Aurora, a well-known riding center is dealing with its own crisis.

The Lothlorien Therapeutic Riding Center can’t operate as usual to help war veterans, children with special needs and others. Its indoor arena, damaged by winter’s heavy snow, is “beyond reasonable repair,” according to the engineers. The riding center can’t hold lessons outside either because of the inclement spring.

“It’s really stopped us from conducting business,” Maggie Keller, the riding center’s executive director. “We have to be very, very cautious. If it’s icy or snowy, we can’t have our horses out there.”

The riding center suffered $275,000 damage and only $100,000 is covered by insurance, leaving it to appeal to the public for help.

A funding campaign page to help the 30-year-old riding center is entitled “Lothlorien TRC: Save Our Center” on GoFundMe.com.