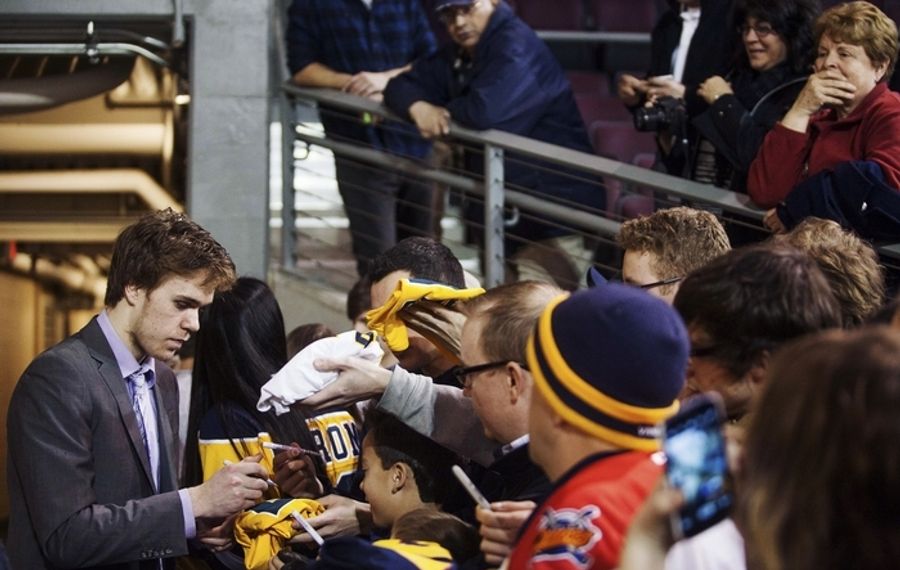 Murray’s team can bring him 6.5 percent closer to the potential superstar Monday night.

Buffalo is set for its rematch with Arizona, and a regulation loss would all but cement a 30th-place finish for the Sabres. The Coyotes are six points ahead of Buffalo, with seven games left for the Sabres and six to go for Arizona.

The 30th-place team gets a 20 percent chance of winning the NHL Draft Lottery, while 29th gets a 13.5 percent shot.

It sounds like even a 1 percent boost at drafting McDavid would make Murray grin.

“I watch him too much and I think too much about him,” Murray told the New York Times. “I wish I could help myself.”

It’s no secret the Sabres’ general manager covets the NHL’s next great prospect. Murray regularly makes the 90-minute drive from Buffalo to Erie, Pa., to watch McDavid play. Murray attended the Otters’ playoff opener Thursday rather than watch the Sabres lose to Arizona in the opening showdown of No. 30 versus No. 29.

“You go through a year like this, it’s tough,” Murray told the Times in a story published Sunday. “I feel bad for our players, I really do. It’s been a tough year. I’m the type of GM, as everybody can see, I’ve traded away a lot of good players for the simple fact we have to get better.

“Our time’s the future. This guy I call our franchise-changing player.”

While McDavid and fellow prospect Jack Eichel remain on the minds of folks in Buffalo, the talk in Arizona is hot weather, spring training and sunshine. The word “tank” never came up Sunday. No one asked the Sabres if they’ll try to win.

The day before the final meeting with the Coyotes, the Sabres simply prepared for a game instead of a sideshow.

“We can just think about coming and playing our game,” right wing Cody Hodgson said in Gila River Arena in Glendale. “It’s definitely something people are talking about back home, but we can’t worry about it in here.”

While Monday’s meeting with the Coyotes is just as important as last week’s game in Buffalo, the atmosphere surrounding it is decidedly laid-back.

Only seven Sabres took a light skate Sunday, including injured leading scorer Tyler Ennis, who is unlikely to play.

The rest met for a short video session before putting on their shorts or sunglasses.

As expected, no Phoenix-area media came to check in on the Sabres.

There were no Connor McDavid placards to be seen amidst the Cactus League baseball caps.

“I don’t think you’ll have the opposition crowd cheering for us when we score,” Sabres coach Ted Nolan said. “I think it’s just the hype of the situation that people get caught up into, but we’ll forget about that one.”

Though the Sabres have been dismayed by the distractions surrounding the two games against Arizona, it’s helped to galvanize their game.

They took the Coyotes to overtime and outshot Colorado, 38-22, Saturday in a 5-3 loss.

“The main focus now is to work hard,” right wing Patrick Kaleta said. “Seven games left, give it everything you’ve got, honest effort, finish it off the right way.”

Finishing a check nearly got the Coyotes’ Shane Doan benched for this game. He concussed Pittsburgh’s Kris Letang with a borderline hit Saturday, but the NHL reviewed the incident and decided not to suspend the captain.

“We have decided not to assess any supplemental discipline to Shane Doan,” the NHL Department of Player Safety said in a statement to the Arizona Republic. “After reviewing the play carefully and from all angles, we have determined that this was an unfortunate result from a hockey play. It is not boarding, it is not charging, he doesn’t hit him in the head. He finishes his check by shoving Letang and unfortunately he falls awkwardly. It wasn’t really even a violent hit, although it resulted in an unfortunate injury.”