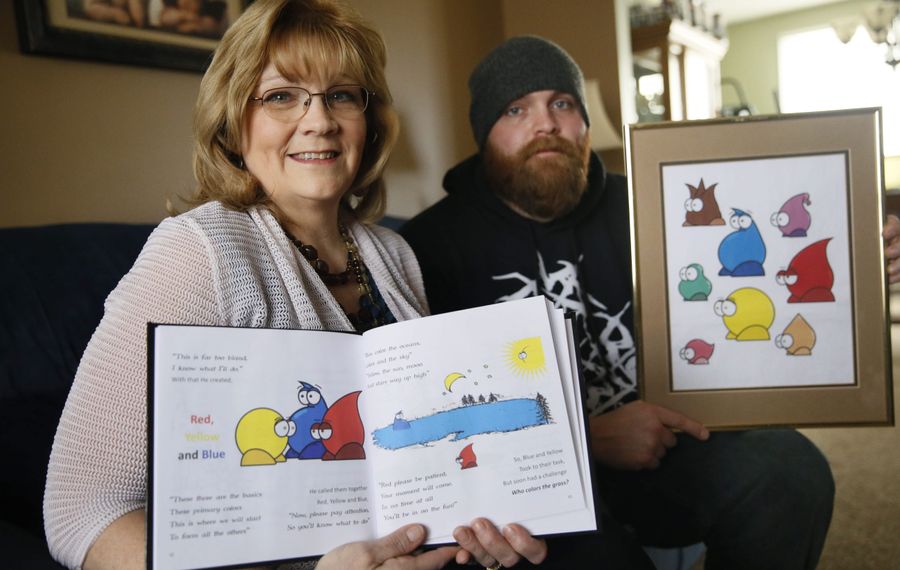 APPLETON – Paula Banks Dahlke doesn’t see things in black and white. For her, only colors will do – bright, joyous colors that can influence our moods and teach us valuable lessons.

Working with colors comes naturally to Dahlke. She earned an associate degree in art and design from Niagara County Community College and has worked for decades in kitchen and home design with her husband, Charles, a licensed architect. She is also a certified color consultant.

Dahlke earned a bachelor’s degree in government and economics from the University at Albany and mounted two unsuccessful campaigns for the Assembly, which she said, nonetheless, “was an awesome experience that expanded my world.”

Now, she has created a children’s book titled “The Perfect Color.”

The book follows three main color characters – Red, Yellow and Blue – as they help God fill the new world with colors of their choosing, ultimately being given the task of coming up with “the perfect color.” Their journey is described in 105 stanzas of lilting rhyme, sure to engage young and old alike.

Dahlke shares credit for illustration with her mother, while her son handled the graphic arts and made the entire book print-ready for the publisher. He also created the bright, crisp color characters that draw readers into lessons of acceptance and diversity.

“My mother did some pen-and-ink drawings for the book, and Matthew made the colors come alive for us,” Dahlke said.

“I designed the character Blue, and he became a jumping-off point for the other colors,” explained Greenwald, who has a degree in graphic arts from Bryant & Stratton College.

“I’ve designed a lot of things, but had never done anything like this before. I work full time on the line at General Motors now, so I worked on this after work. It’s been neat to have friends in support of this and ask, ‘Where can I get a copy?’ ”

The hardcover book sells for $15 to $18, depending on the seller. It is available online through a number of outlets, including Barnes & Noble and Amazon.

“It’s also available in seven other countries right now, through direct links on our website, to the United Kingdom, Australia, Germany, India, Japan, France, Sweden and Norway, with the information written in the language of that country,” Dahlke noted.

The idea for the book had its origins in Dahlke’s home, when she would make up stories for her three children when they were young, incorporating their favorite colors and, usually, a lesson. “Every child has a favorite color, and my daughter’s character was pink, so ‘Pink’ would have her adventures and learn lessons as she went along,” Dahlke recalled.

“The stories were reflective of my personal experiences and my faith. My mother was a teacher – she taught everything, I think, except art, including German and Latin, and she taught elementary through high school. But she also was a portrait painter, so I grew up understanding shades and hues of color.”

She chose a Christian publisher, Xulon Press, and dedicated the book, in part, to her former pastor, Ron Friedersdorf, of Victory Christian Church in Lockport, to acknowledge the positive impact he had on her.

“We were honored and humbled to present a copy of this book to Ron and he was overwhelmed when we gave it to him,” Dahlke said.

She also gives a nod to her father, Adrian Banks; her sister and literary consultant, Susan Banks Linderman; tech-savvy niece, Victoria Banks; and two other children, Aaron and Carly, for their inspiration in helping create the book.

Her husband, Charles, has played a couple of roles in this new career. He gave her a tablet and asked her to write her stories down after a serious car accident made her temporarily housebound in March 2013. She had to wear a leg brace for months and eventually had to have a hip and knee replacement.

“This was really the wind beneath my wings,” she said of the gift.

He also helped her research children’s books, looking for the right size, shape and colors, to use in her creation.

Dahlke, 60, also mentions some newer “additions” to her family, which also provided inspiration – the seven exchange students whom she and her husband have hosted through the years. They include students from Korea, Germany, Spain and Brazil.

“My husband calls them our ‘imported children,’ and they have become our sons and daughters, too,” she said. “They are in their 20s now, and we still keep in touch with all of them.”

“The next one will be finished soon, and it’s called, ‘Why Is Pink Blue?’ with the same characters,” Dahlke said. “In this book, Pink is sad because she is offended by something she thinks she overheard, and she has to learn how to forgive.

“The next one is, ‘Is Orange Yellow?’ and in this book, Orange learns not to be afraid of failure,” Dahlke added.

“There’s also ‘Purple Has Green Eyes,’ where Purple learns about jealousy and envy and what to do about it. Then there’s ‘Green Sees Red,’ which is about anger. Children learn you can get angry without going around wrecking things. The colors work together to understand how to work through something.

“These books are for readers ages zero to 100,” she added. “Adults can read them and get something out of them and children can apply the lessons to their own lives, too.”

But Dahlke isn’t going to give away the ending – and the message – of her current book, “The Perfect Color.”

“The message of the book comes at the perfect time,” she said.

“I’ve had people in their 80s read the book, and you can just see the look on their face when they finish it and say, ‘Oh! It’s so basic, but it’s true.’ ”

Dahlke will have a book-signing from 11 a.m. to 2 p.m. May 2 at Bender’s Parable Christian Store, 8550 Sheridan Drive, Clarence.