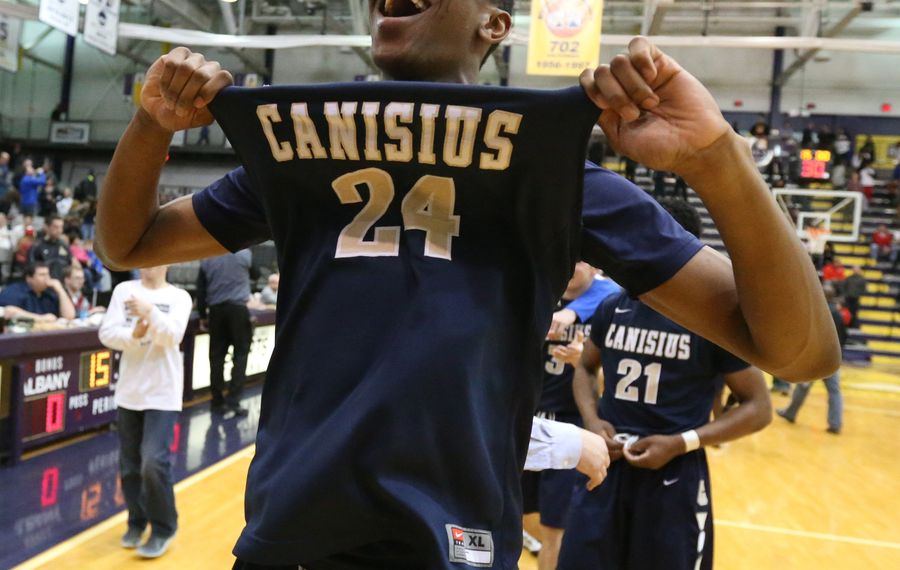 ALBANY – Refuse to lose is not the official motto at Canisius High School. It just seems like it is as the Crusaders’ athletic year for the ages just got a little bit sweeter thanks to the school’s heroes of the hardwood.

Canisius made history Saturday night as it held on to defeat local favorite Albany Academy, 48-44, in the Federation Tournament of Basketball Champions Class A boys’ final. It came before an estimated 800 at University at Albany’s SEFCU Arena. Senior all-tournament pick Josh Huffman scored 16 points to lead the Crusaders, while tourney MVP LaTerrance Reed added 14 as Canisius won its first Federation title and became just the third Western New York program to win a Fed boys title since 2005, joining Niagara Falls (Class AA, 2005) and Nichols (Class A, 2010).

“It feels ridiculous,” said Crusaders 6-foot-7 junior and all-tournament pick Stafford Trueheart, who was plagued by foul trouble all game but still grabbed six key rebounds and chipped in four points before fouling out with three minutes left. “It’s an unreal feeling.”

Canisius is just the 10th Buffalo-Niagara area school to win a boys Federation title in any class since the tournament started in 1978. The list could grow by the end of the weekend as Park plays Maspeth of New York City for the Federation Class B championship at 4 p.m. Sunday.

The Crusaders’ basketball team joins the school’s football and hockey programs as state champions this year.

Canisius hoops stands out a little bit more as it needed to win the state Catholic championship in order to have a chance at winning the overall state Federation crown. The state doesn’t crown Federation champions in football or hockey.

“I don’t think it’s going to set in … I love these guys,” said 11th-year Canisius coach Kyle Husband, who was an assistant coach on the Crusaders team that lost in the Federation Class C final in 2001 to Buffalo Traditional. “They’ve been tremendous all year. It truly shows when a team can come together and really play as one and care so much about each other what they can accomplish. They were terrific.”

The Crusaders had to be since they were basically playing a pair of road games at this neutral site since they drew the two tournament entries that call the Albany-area home.

Canisius reached the final by ending the 53-game winning streak of defending champion and public-schools entrant Scotia-Glenville, which is about 20 minutes away from SEFCU Arena, in overtime on Friday morning.

The Crusaders (25-5) looked like they would blow out a big, Albany Academy team (17-4) that won the Federation title in 2013. Reed sparked an 11-2 run to open the game with a trey and ended it with a transition layup after a Huffman steal.

Canisius led, 14-8, after the first quarter but both teams struggled to score in this one. The Crusaders limited the Cadets to 17 percent shooting in the first half and 24 percent for the game. Canisius, which shot 28 percent overall, led, 22-16, at halftime.

Huffman opened things up a little bit in the third quarter by driving the lane against Albany’s big men in waiting. He had six points that quarter, sinking 4-of-4 shots from the line as the Crusaders pushed the lead to 28-20. Madut Ayiy, who along with Trueheart fouled out, scored three of his five points in the third to keep Canisius in the lead.

The Crusaders led, 35-27, early in the fourth quarter after a putback by unsung hero TJ Wheatley. The 6-foot-7, 280-pound senior logged lots of important minutes this weekend, especially Saturday night with Trueheart and Ayiy in foul trouble. Wheatley guarded the paint down the stretch because he was the only big man left.

“It was crazy,” said Wheatley, who finished with three points, eight rebounds and could be seen crossing his fingers while Huffman was shooting free throws during the final seconds. “I didn’t know what to expect because I’m not the go-to guy most of the time. I had to go in there and step up. It was crazy. They had some great players but we overcame that and got this ‘W.’ ”

“If it weren’t for Josh Huffman and TJ Wheatley we wouldn’t be here right now,” said Reed, who scored 19 points in Friday’s game – noting the winning attitudes they brought to the team following football season. “We wouldn’t have the winning atmosphere that we have. They’re great contributors. They could’ve taken the season off and say I want to focus on football … but those guys dedicated their time every day in the gym and they worked with us and we wound up” coming out on top.

Canisius led, 44-32, with 4:11 left after a Huffman trey. It seemed like the Crusaders would cruise to the finish line but then Trueheart and Ayiy (13 rebounds) fouled out, opening the door for the Alliance of Independent Schools champion to test their mettle one more time.

“We have other players coming off the bench that can provide some starting minutes,” Huffman said. “That’s what wins championship games.”

“This is the best sporting year I’ve had in my entire life,” said Wheatley, who like Huffman and Justin Jones were members of the state championship football team. “This is what I came back for. … I knew we had an opportunity to do something big, make Canisius history and I really wanted to be part of that. … It’s awesome.”